A four-day hospitalisation earlier this month, on account of Covid-19 complications, got the 28-year-old social worker thinking 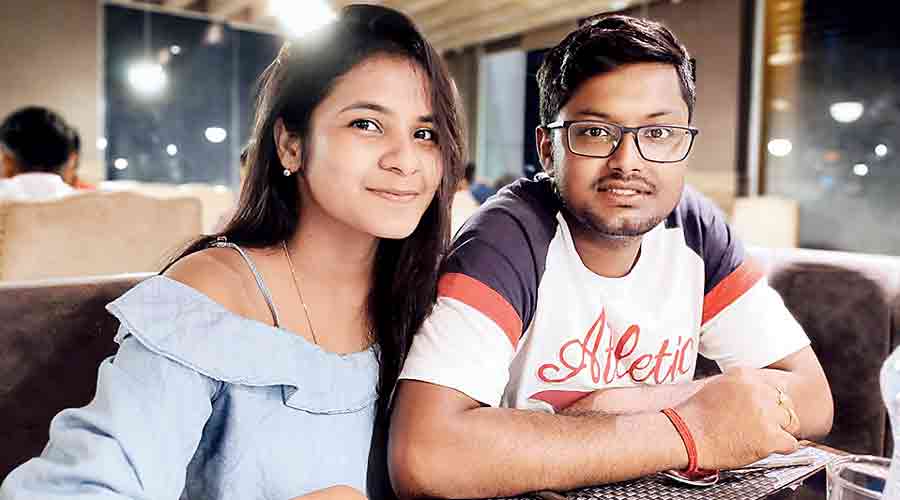 A 28-year-old social worker and trader from East Burdwan’s Palla Road, Sandipan Sarkar, has invited 400 people for his wedding on the evening of January 24, but without flouting the 200-head ceiling set by the state government for such events in the wake of the third wave of the pandemic.

Sarkar has decided to use Google Meet to telecast his wedding live for the invitees. He also has tied up with Zomato to have their dinners sent to the doorstep of the e-guests.

A four-day hospitalisation earlier this month, on account of Covid-19 complications, got Sarkar thinking.

“I suffered a lot because of the pandemic and the hospitalisation prompted me to think of a solution to avoid a large physical gathering. I shared my thoughts with my family and with Aditi (Das, his fiancée). Everyone, including all my friends, welcomed the idea and asked me to go right ahead,” he said.

So now, there will be only a handful of people at the physical site of the ceremony, besides the bride and the groom. A link for live telecast of the ceremony would be sent to all invitees, including some from elsewhere in the state and the country.

“I have requested all the guests to stay home and have the dinner we send, while watching our wedding online,” said Sarkar, who participated in many drives to curb the outbreak. He also is part of a family-owned transport business, besides a hardware business in the area. His fiancée is a resident of Burdwan and was employed with an IT firm in Calcutta.

Zomato’s local officials said they were surprised at first by such a proposal, but it excited them and they promised all help.

“It was a very new idea for us. I talked to seniors in the company, who welcomed it. We have already prepared a team to monitor this wedding’s deliveries. We laud such a move in the pandemic. We are planning to promote this event officially,” said a Zomato official.

Sarkar said Zomato has contacted a restaurant in Burdwan, from which all the deliveries would be made, and it would be put together like a platter that invitees usually get at traditional weddings.

“Zomato did a lot for me. They went above and beyond… they are even going to deliver the food to every guest, including those in Calcutta or Bangalore,” said Sarkar.

Avik Pal, a cousin of the groom, who lives in Bangalore and works as a researcher, said he was thrilled.

“This makes me so happy. I would not have been able to attend the wedding, had it taken place normally. Now, I will not only witness the ceremony, I will also get the wedding food delivered to my doorstep, right here in Bangalore,” said Pal.