The deceased were identified on Wednesday as Pargat Singh, 39, and Sarabjit Singh, 29 from Punjab, and Shamshad Ali, 35, from Bihar 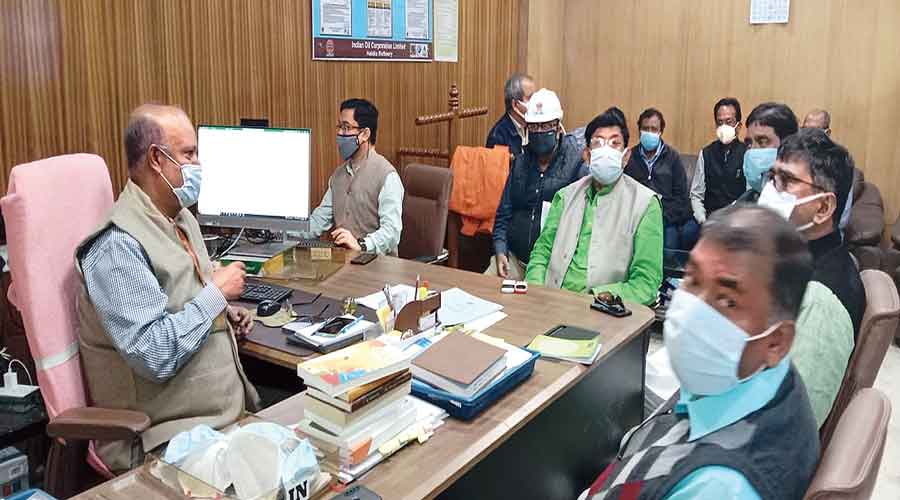 Minister Soumen Mahapatra (in green kurta) at the meeting with IOC officials in Haldia on Wednesday.
Telegraph photo.
Anshuman Phadikar   |   Haldia   |   Published 23.12.21, 02:58 AM

Contract workers of the Indian Oil Corporation on Wednesday morning protested outside the gates of the company’s refinery in East Midnapore’s Haldia, a day after a fire at one of its units killed three workers and injured 44 others.

Protesters were prevented by the CISF personnel from entering the premises, ostensibly to prevent violence.

However, a contingent led by state irrigation and waterways minister Somen Mahapatra and Trinamul trade union front INTTUC’s district leader Tapas Maity later went to the IOC’s corporate office in Haldia and held a meeting with its officials on compensation and safety measures

“The protesters are contract workers who are angry over Tuesday’s incident (the fire at the machine-spirits quality unit) and want justice for the kin of the deceased and the injured,” said an INTTUC worker. One of the points of contention was an alleged delay in emergency response services on Tuesday when the fire broke, he added.

Following the meeting with IOC officials, including Haldia refinery’s chief general manager (technical) Debasish Dutta, minister  Mahapatra said Rs 10 lakh had been demanded for the kin of each deceased and full medical coverage and future employment arrangements for the injured.

The deceased were identified on Wednesday as Pargat Singh, 39, and Sarabjit Singh, 29 from Punjab, and Shamshad Ali, 35, from Bihar.

“The future of their families need to be secured," said the minister, who later visited the site of the accident.

Speaking to reporters, INTTUC’s Maity again spoke on the need for better emergency response in future.

“Safety measures and communication gaps will need to be bridged in order to prevent such incidents in future,” he said.

On Wednesday, the state government’s assistant director of factories, Haldia, Debayan Dey, issued a letter to the IOC asking them to cease all undergoing maintenance work until further notice.

“I visited the accident site on Tuesday evening. Any further work is to be held in abeyance pending investigations and an official explanation,” Dey said on Wednesday.