How revolutionaries stole a cartload of weapons 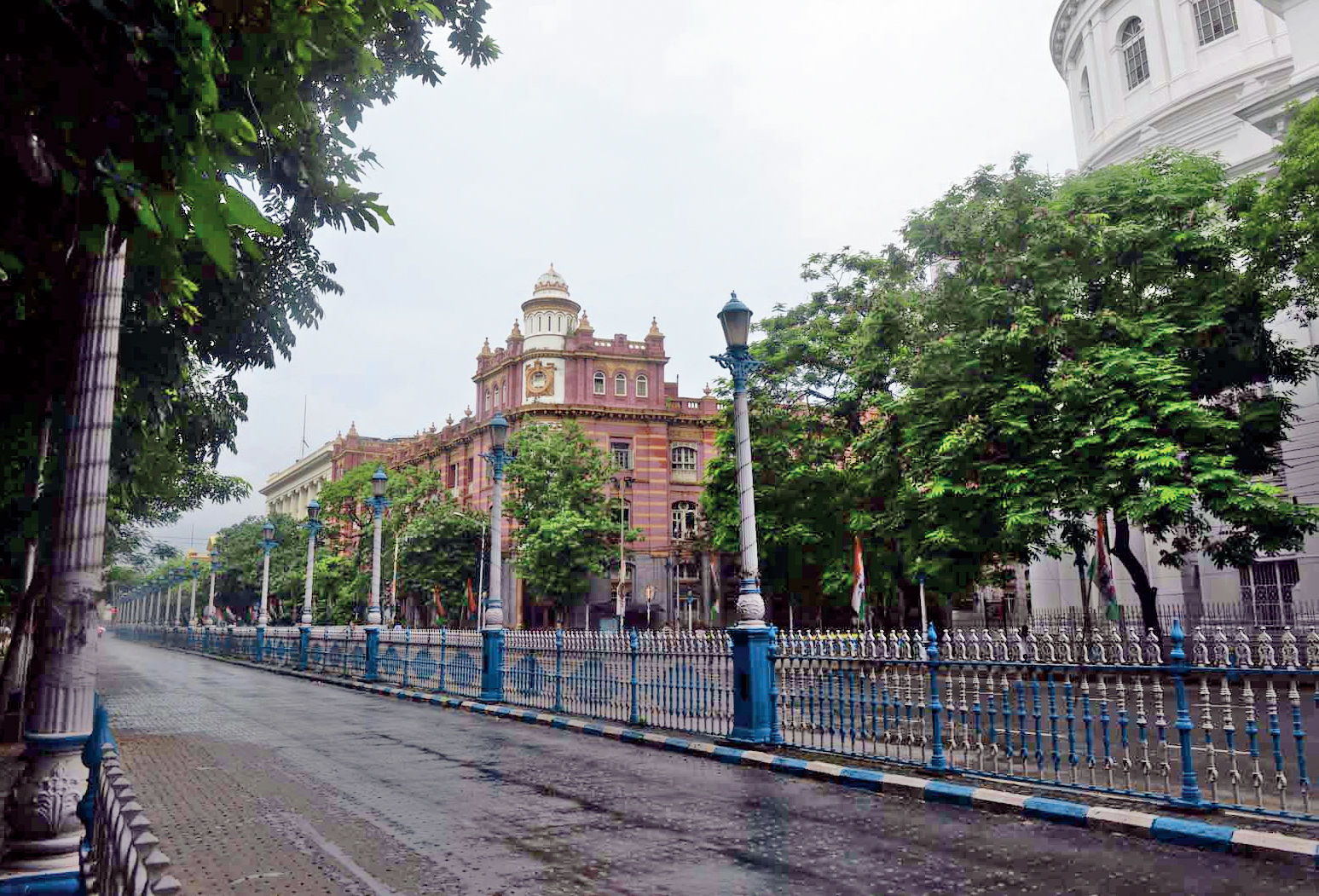 The road taken by the carts — past GPO and Royal Insurance Building before turning left towards the Rodda godown. The seventh cart had Haridas Datta, one of the rebels, as its coachman.
Pictures by Bishwarup Dutta
Debraj Mitra   |   Calcutta   |   Published 26.08.19, 10:57 PM 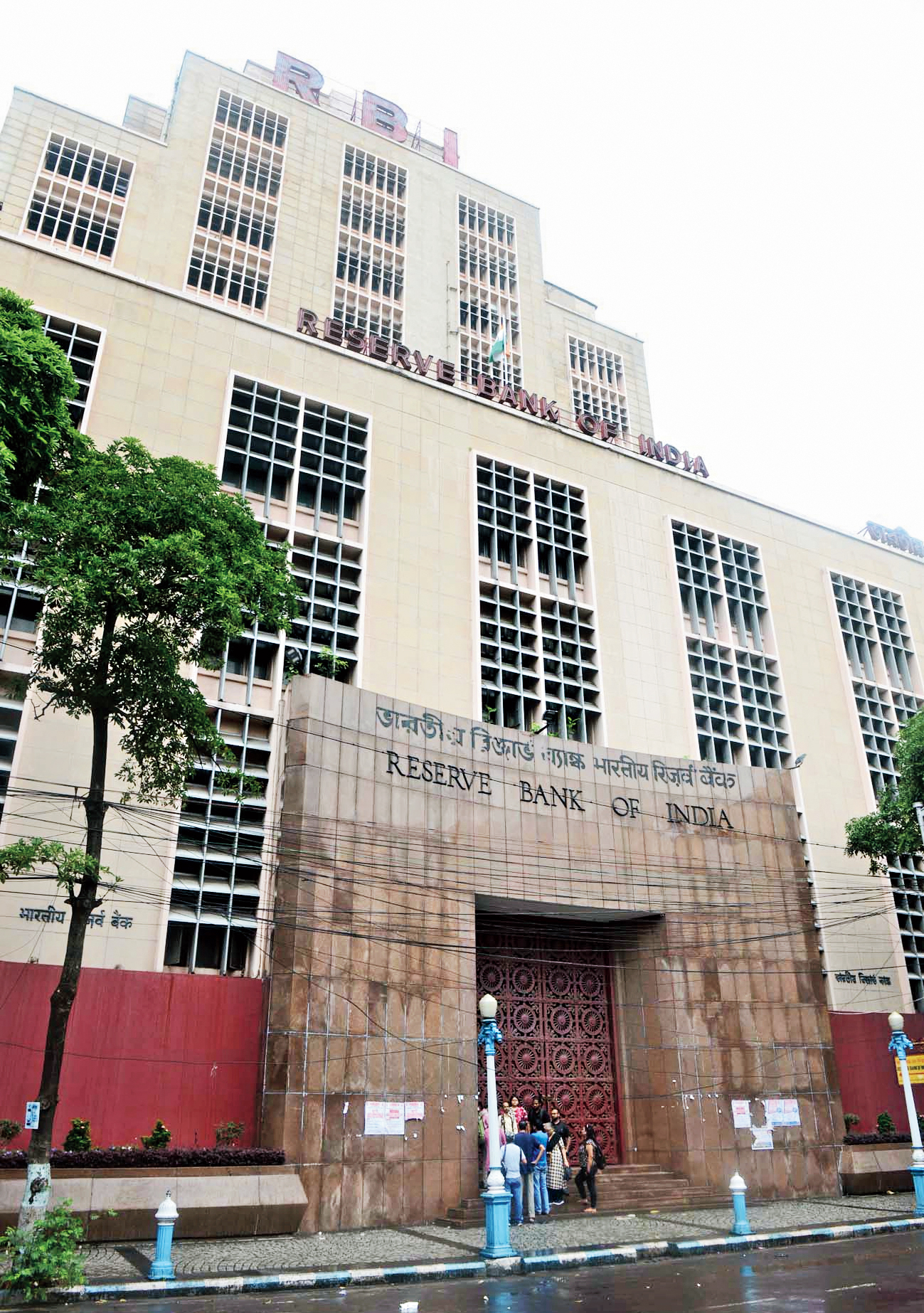 The group started the walk from the RBI office at Dalhousie Square, where the Customs House had stood in 1914. After getting clearance, the consignment of arms left Customs House for the RB Rodda & Co godown on seven bullock carts. Srish Mitra, one of the revolutionaries, had already been working at Rodda and earned the trust of his seniors. On August 26, 1914, he was at Customs House, personally handling the operation

A group of people met in front of the Reserve Bank of India around 7am on Sunday. Over the next three hours, ignoring persistent drizzle, the group toured several roads and lanes in the heart of Calcutta’s central business district.

Exactly 104 years ago, another group had taken the same route, also on a rainy day. The group comprised revolutionaries who pulled off what was possibly colonial India’s smoothest arms heist.

The Rodda arms heist of August 26, 1914, described as the “greatest daylight robbery” then, involved stealing a cache of arms on a bullock cart right under the nose of the British administration without a shot being fired.

The haul was a large consignment of guns and cartridges brought to Calcutta by R.B. Rodda & Co, a prominent gun dealer that had a godown at Dalhousie Square.

The Chittagong Armoury Raid of 1930, carried out by Masterda Surya Sen and his group, cost over 10 freedom fighters’ lives. More than 50 members of British forces were also killed.

On August 26, 1914, seven bullock carts were to transport weapons from the Customs House to the Rodda godown. The last cart had a rebel as

its garwan (coachman) and made a detour to a den of freedom fighters near Wellington Square, in central Calcutta.

Freedom fighter Bipin Bihari Ganguly was involved in planning and provided support to the trio from behind the battleline.

Another key player was Srish Mitra, who took up a job at Rodda to orchestrate the heist as an insider.

On Sunday, the walkers first met in front of the main gate of the RBI, at the southeastern corner of Lal Dighi.

“The Customs House used to stand here, exactly the same place where the RBI stands. The foundation stone (for the Customs House) was laid on February 9, 1819, by Governor General (1st Marquess of) Hastings. It ceased to function in that capacity after a new Customs House was built in 1942. In 1914, the arms were first brought here for customs clearance,” Amitabha Gupta, the organiser of the walk, told the participants. 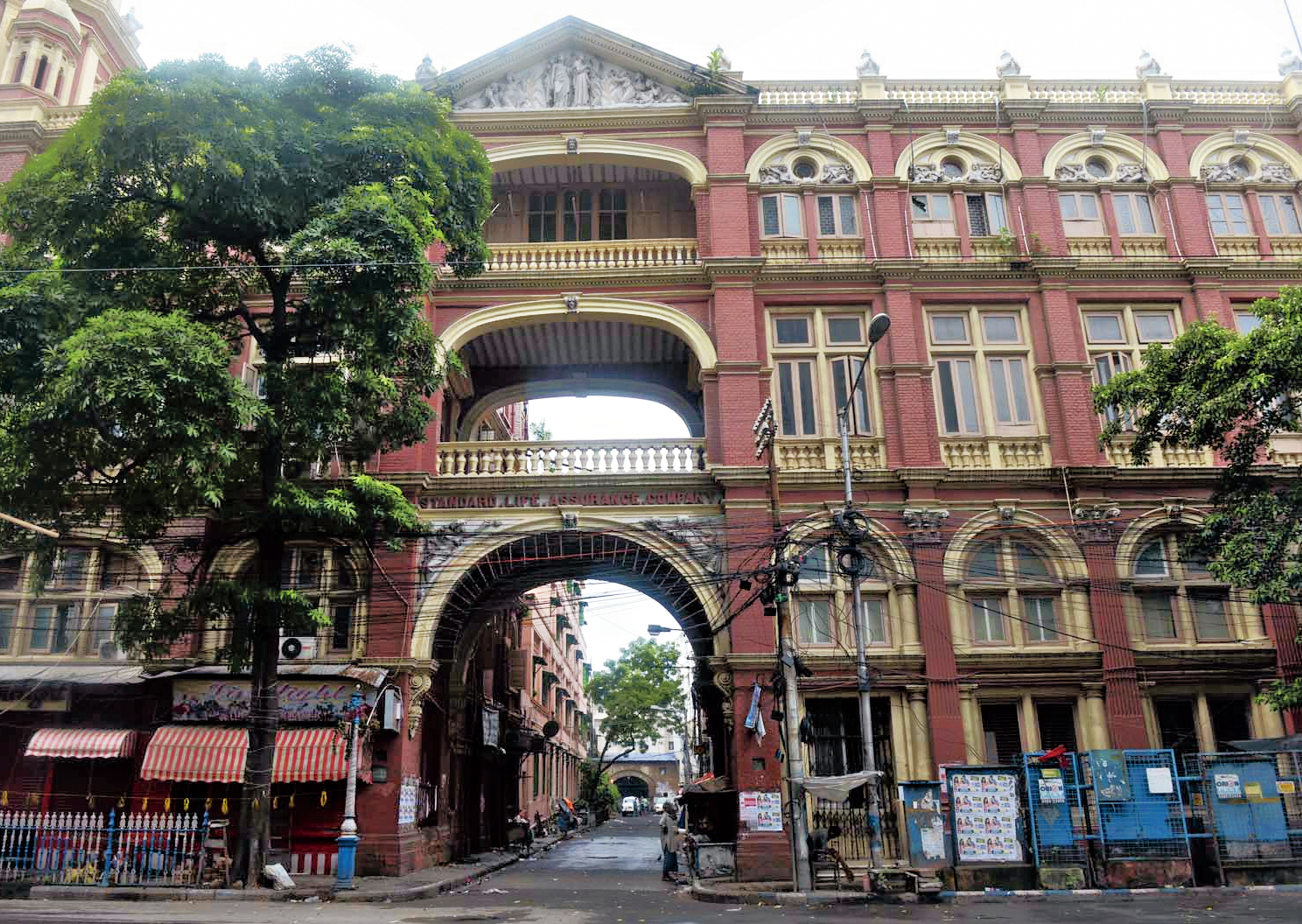 The Standard Life Assurance building on Hemanta Basu Sarani. The small passage through the gateway leads to one end of the Rodda godown. 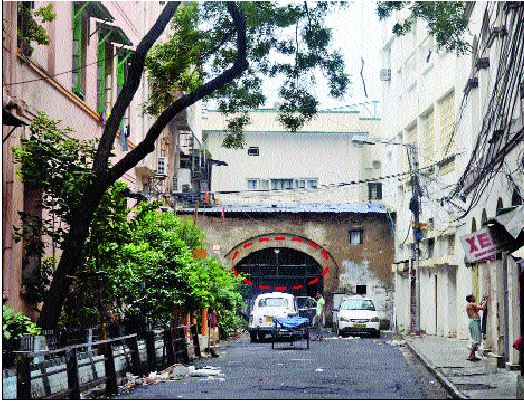 The godown (marked in red) where the arms were meant to reach. 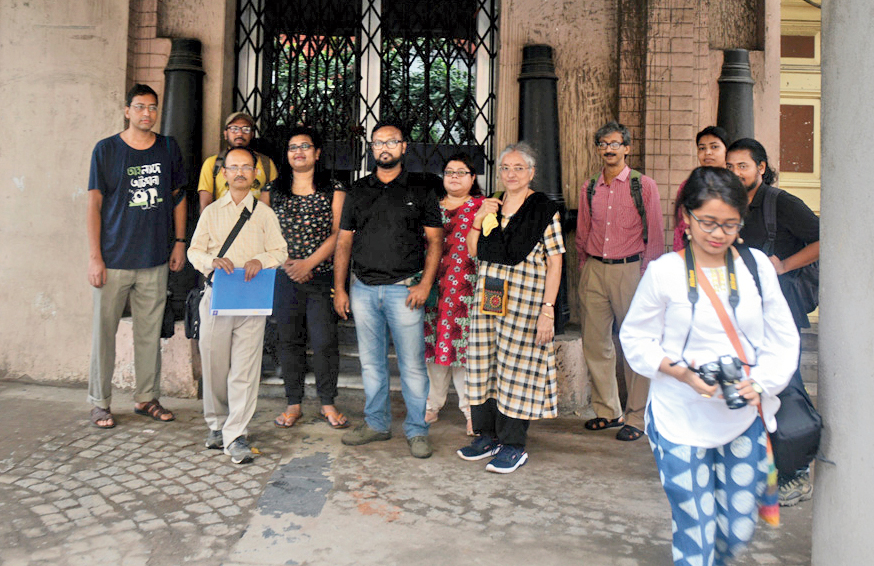 There is another entrance from Red Cross Place (in picture right). The only pointer to the past are two canons mounted upright along the wall 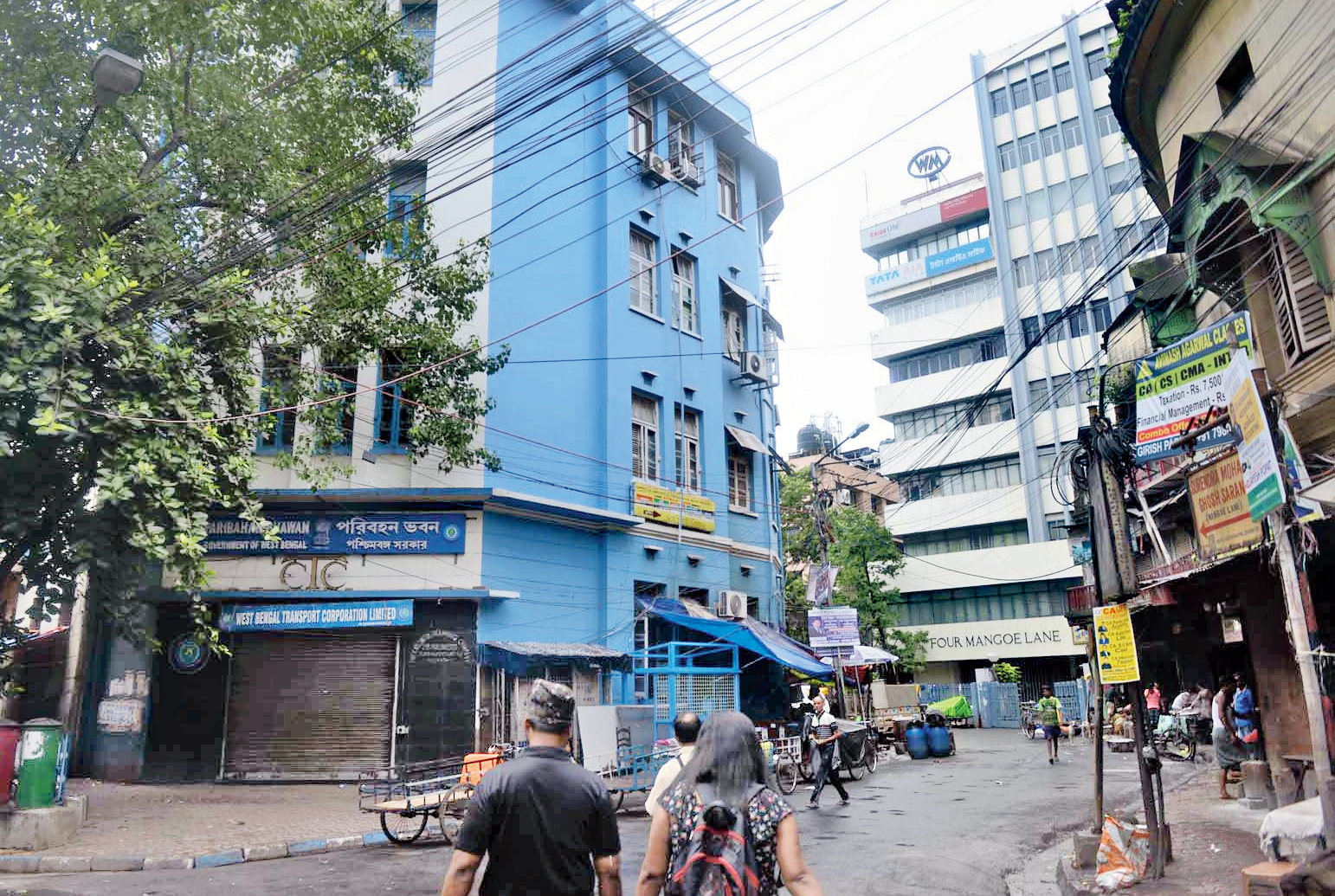 The seventh cart did not enter the godown but kept moving towards Wellington Square through Mission Row, Mangoe Lane (in picture), Bentinck Street, Lenin Sarani and Nirmal Chandra Street 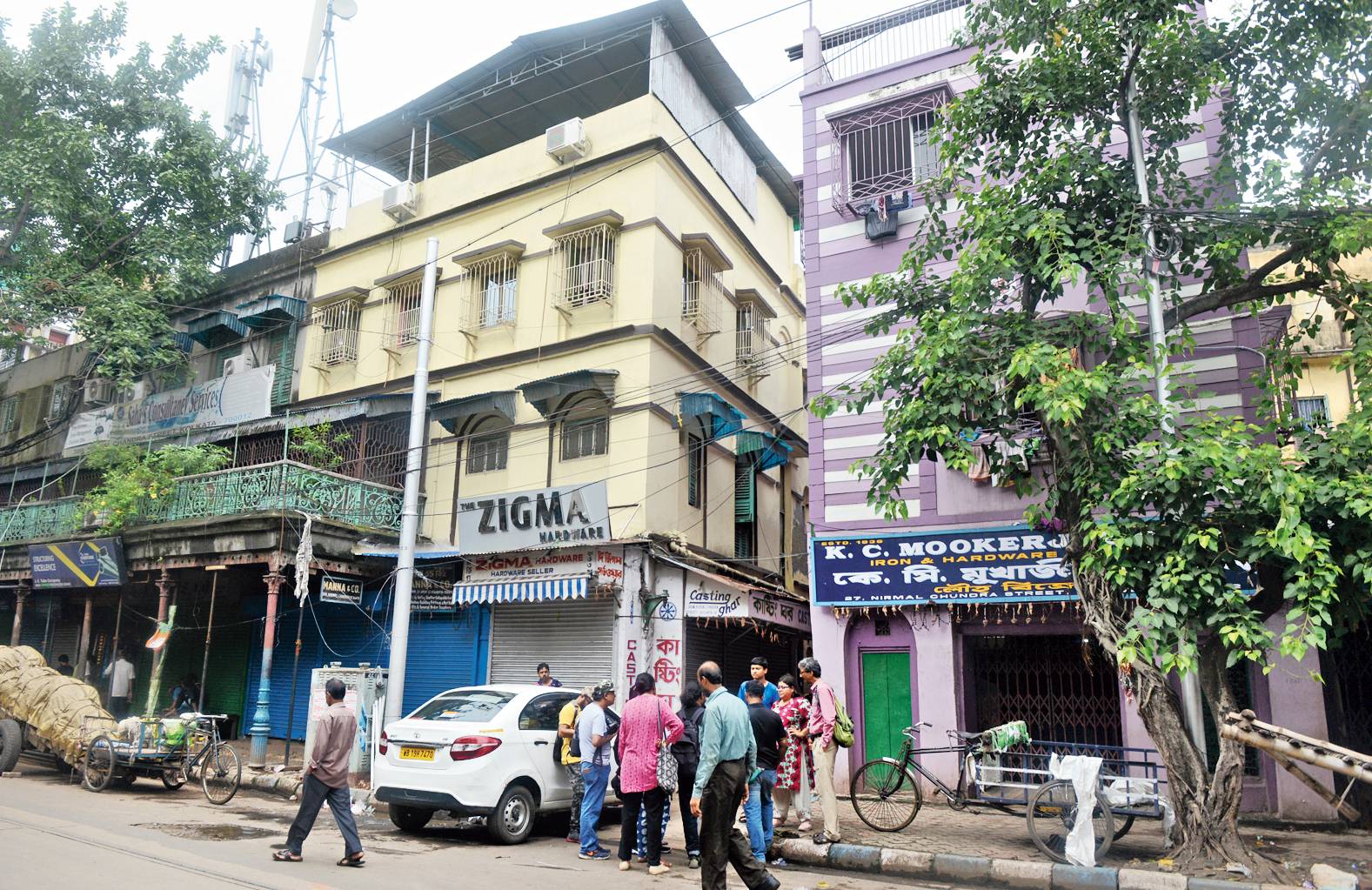 There was a godown near the intersection of Nirmal Chandra Street and Malanga Lane that belonged to Kanti Mookerjee, a hardware dealer. His grandson was a friend of Anukul Mukherjee, one of the masterminds of the heist. The seventh cart was unloaded in front of the godown. Picture shows a signboard of the Mookerjees’ family business 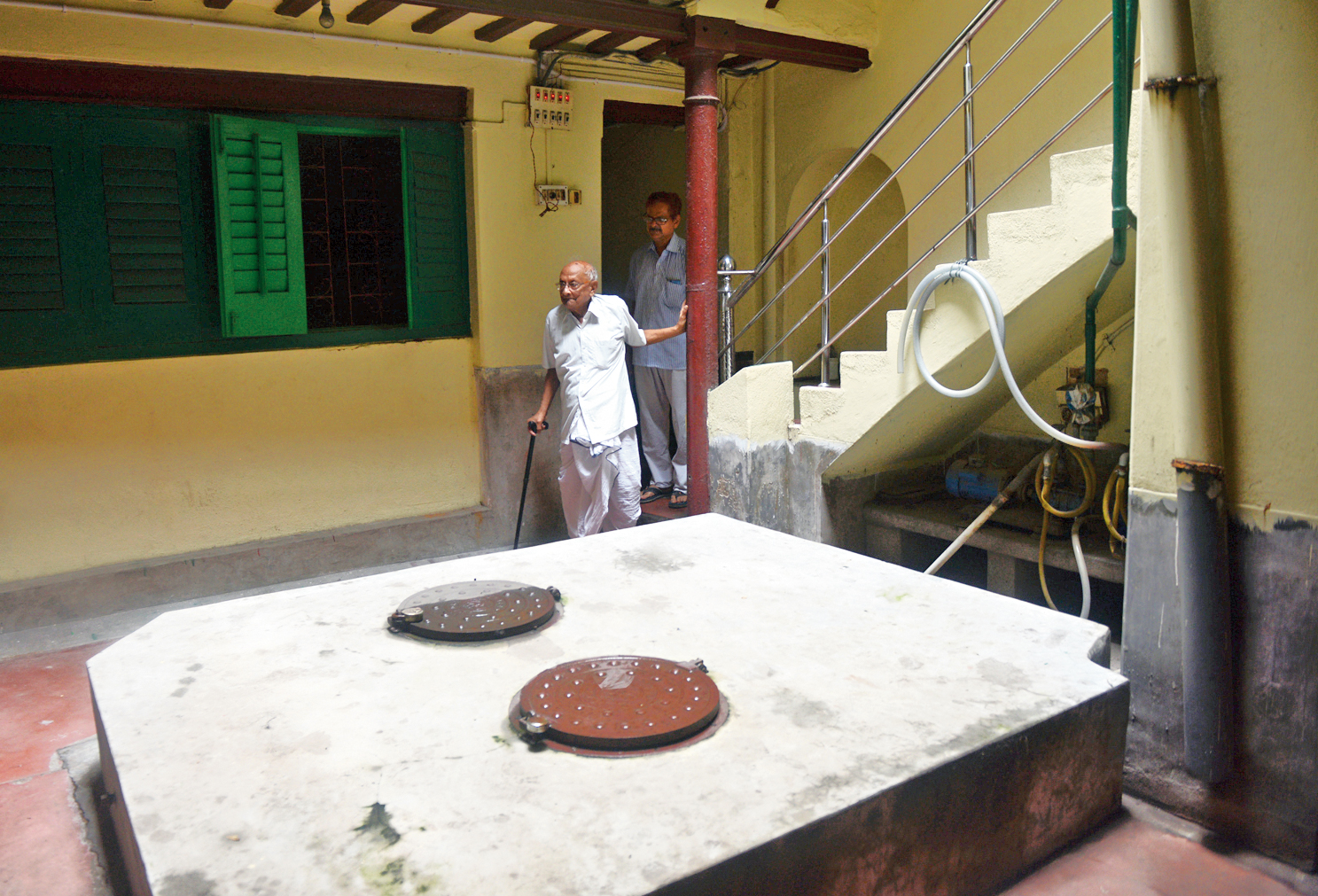 From the Mookerjee godown, two hackney carriages delivered the arms to the house of Bhujanga Dhur in Jelia Para Lane. The tank was not there in 1914 and the arms were kept in the courtyard, said Barendra Chandra Dhur (the elderly man with a walking stick), Bhujanga Dhur’s nephew. From the Dhur house, the arms were distributed to various groups of revolutionaries 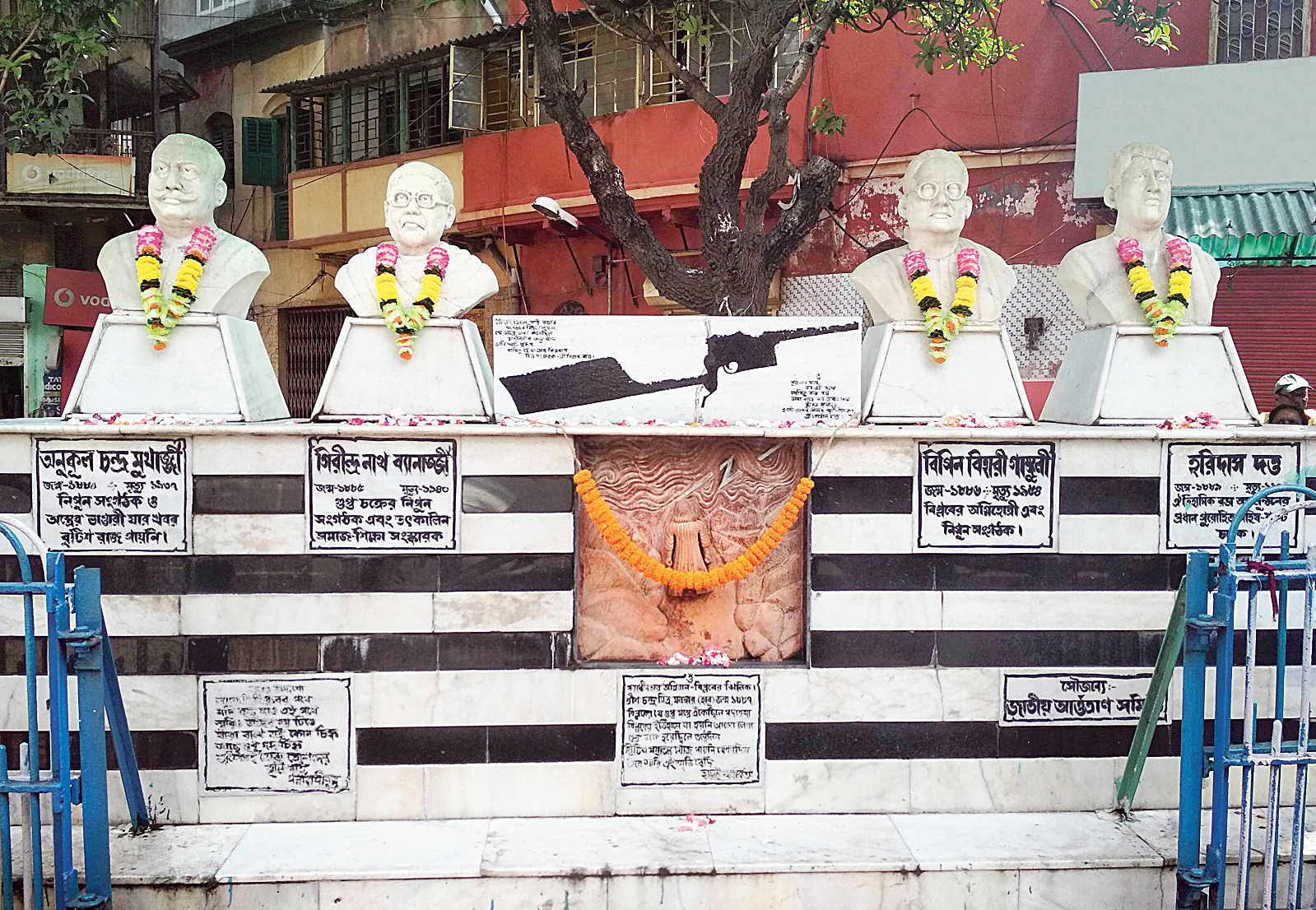 As a reminder to the heist, Gopal Mukherjee (popularly known as Gopal Pantha), the nephew of Anukul Mukherjee, built a memorial on Ganesh Chandra Avenue. The memorial has busts of (from left) Anukul Chandra Mukherjee, Girindra Nath Banerjee, Bipin Bihari Ganguly and Haridas Datta. A plaque bearing the Mauser C96 gun with its wooden shoulder stock is at the centre. At the bottom is an artwork of Srish Mitra walking towards the horizon. Gopal Mukherjee’s grandson Santanu Mukherjee takes care of the memorial, said Gupta.

The walk was part of Break Free Trails, a social media initiative by heritage enthusiasts Gupta and Shaikh Sohail to promote walking tours for heritage awareness.

The consignment of arms targeted by the revolutionaries included 50 pieces of Mauser C96 — a semi-automatic pistol built by the German arms manufacturer Mauser — and thousands of cartridges.

“The guns were easy to use and had a long range, the reasons why they were robbed,” Gupta told the participants, a motley crowd of a dozen.

The group then reached the Standard Life Assurance building on Hemanta Basu Sarani, another Raj-era structure with an arched gateway. A small passage through the gateway ended at what looked like an abandoned factory, with a smaller archway.

It was hard to tell the original colour of the rickety exterior wall that stood in contrast with the fresh coat of a whitish paint on adjacent buildings. Two cars were parked on the passage in front of the archway, the ground strewn with litter.

“This used to be the godown of Rodda, where the weapons were kept,” said Gupta, pointing at the closed collapsible gate. The godown has another entrance on Red Cross Place, adorned by two cannons, the lone pointer to its past.

One of the stops for the group was a memorial on GC Avenue near Hind cinema.

It has the busts of the architects of the heist — Bipin Bihari Ganguly, Anukul Chandra Mukherjee, Girindra Nath Banerjee and Haridas Datta.

The memorial also includes a plaque of the Mauser C96 gun with its wooden shoulder stock and an artwork of Srish Mitra walking towards the horizon.

“Srish Mitra could never be traced after the operation. Nobody knows what happened to him,” said Gupta.

The walkers also met descendants of the freedom fighters.

“This history of the Rodda heist sits behind other famous events and names of later years. But what happened was unprecedented. It was one of the best planned and executed arms heists in pre-Independence India,” said Suranjan Das, historian and vice-chancellor of Jadavpur University.

Tirna Sarkar, 23, who took part in the walk, had never heard of the Rodda arms heist before Sunday.

“I could not believe that they pulled off a heist like that in broad daylight,” she said.