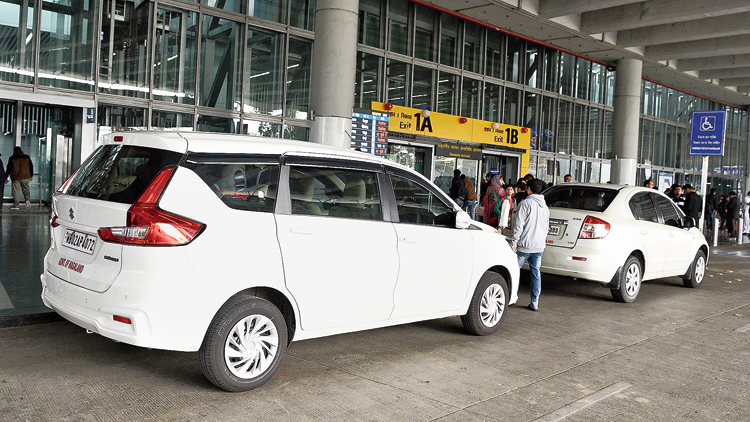 A car with the “Government of Nagaland” sticker pasted on it was parked in front of gate numbers 1A and 1B of the airport for over 40 minutes on Sunday
Picture by Gautam Bose
Snehal Sengupta   |   Calcutta   |   Published 23.12.19, 09:12 PM

Cars belonging to senior functionaries of various governments continue to be parked right in front of the airport’s terminal in violation of rules.

Metro on Sunday spotted a number of vehicles — some fitted with beacons and others had boards fixed on their windshields announcing that they belonged to the government — parked in front of the terminal for around 40 minutes or more.

Vehicles are allowed to stay on the airport premises for 10 minutes. If any car stays for a longer period, marshals deployed by the private agency that runs the airport’s parking lot are to collect a fine of Rs 400 from the driver.

On Sunday, so long this newspaper was at the airport, there were no marshals to collect the fine and no cops to shoo away the VIP vehicles parked for long durations.

Sources said the policemen who would patrol the airport premises and look out for rule-flout cars have been deployed elsewhere to prevent any flare-up over the Citizenship (Amendment) Act and National Register of Citizens and to manage the rush during the Christmas-New Year period.

“A few weeks back, following a meeting with officials of various departments, police were asking the drivers of rule-flout VIP cars to park in the designated area on the premises and turn up in front of the terminal only when the fliers were ready to leave. But there has hardly been any police deployment for a few days and VIP vehicles have returned to their old ways,” an official at the airport said.

“Most of our men have been deployed in New Town and its adjoining areas because of protests (against CAA and NRC) and year-end festivities.... Marshals are supposed to collect Rs 400 as fine from errant vehicles and tell the drivers of VIP vehicles to park in the designated area,” said an officer of the Bidhannagar commissionerate.

Another car with the “Government of India” sticker pasted on it was parked a few metres away.
Picture by Gautam Bose

“Dwell time” refers to how long a vehicle can remain in front of the terminal building without paying any fee and “running time” denotes the time taken to travel to terminal from the gates and back.

According to airport sources, the total time a car spends on the airport premises is taken into account because there is no mechanism to ascertain the “dwell time” and the “running time” separately.

A man who identified himself as a parking marshal said the drivers of “VIP” cars could not be spotted for most of the time. “Most drive in at least an hour before the persons they will pick up are supposed to land. We don’t dare say anything to them,” the man said.

In August, a parking marshal was arrested after he had clamped a VIP vehicle that had allegedly violated the parking rule and shoved the driver. Babulal Yadav, the general manager of the agency that manages the parking lot, was arrested, too.

Yadav said he had asked his men to steer clear of VIP and government vehicles after his arrest.

On Sunday, this newspaper spotted a Mahindra Bolero with a blue beacon on its roof and a red beacon on its front bumper guard parked in front of gate number 2A at the arrival level for at least an hour.

The driver of the vehicle, whose front windshield had the words “Govt. of West Bengal On Duty” written on it in red, was sitting inside but made no effort to move it to the designated parking area.

Around 2pm, a Maruti Ertiga and an SX4 pulled up in front of the gate numbers 1A and 1B. Both cars had the “Government of Nagaland” sticker pasted on them. The drivers walked away and the cars remained parked for more than 40 minutes.