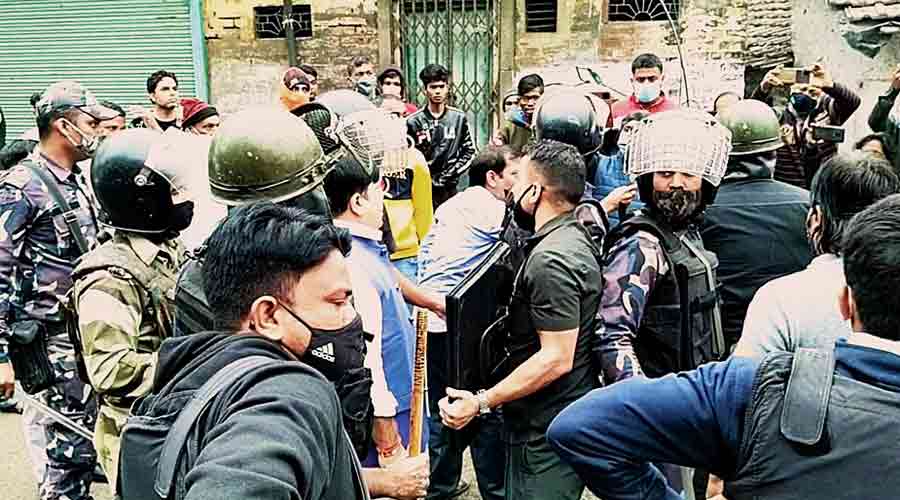 Barrackpore BJP MP Arjun Singh, father of the MLA Pawan, reached the spot after hearing about the clash and got into a scuffle with the Trinamul supporters.

“As Singh and his son jostled with Trinamul activists, CISF jawans assigned to provide security to the MP fired at least seven rounds in the air,” said a witness.

The incident occurred at Manikpir in ward 14 of Bhatpara municipality. Arjun Singh’s residence is barely 2km away. The tension broke out around 9.30am when Pawan paid tributes to a bust of Netaji at Manikpir.

Bhatapara police tried to isolate the Trinamul supporters but they pelted Singh, his son and the security guards with stones. Their vehicle was also ransacked. “Reinforcements arrived and brought the situation under control,” said the police source.

The MLA, at least two CISF personnel and two BJP activists were injured.

Trinamul lodged three separate complaints with the Bhatpara police against Singh and his security personnel. The BJP also filed a police complaint against Trinamul supporters.

Sing said the attack had been “pre-planned” by the local Trinamul leadership. “It was a simple programme to distribute masks and sanitiser on the occasion of Netaji’s birth day. But Trinamul activists attacked BJP workers. When I rushed to the spot, they attacked me,”  said Singh.

Trinamul’s Jagaddal MLA Somnath Shyam, who later raised the national flag near Netaji’s statue, said: “Arjun Singh in his trademark style tried to attack Trinamul workers with the support of antisocial elements. But, local residents and our supporters thwarted his plan. He found no way to escape and used his security personnel who opened fire and tried to kill our workers.”

“The situation once again brought to light the law and order in Bengal”, Majumdar said.

Police commissioner Verma said: “A clash between two youths close to the Netaji statue led to the violence. Police began a probe to find out if there was any provocation. We are also looking into the firing by the MP’s security personnel.”