Gurung faction’s No. 2 slams former ally for ‘doing nothing for 11 years’ 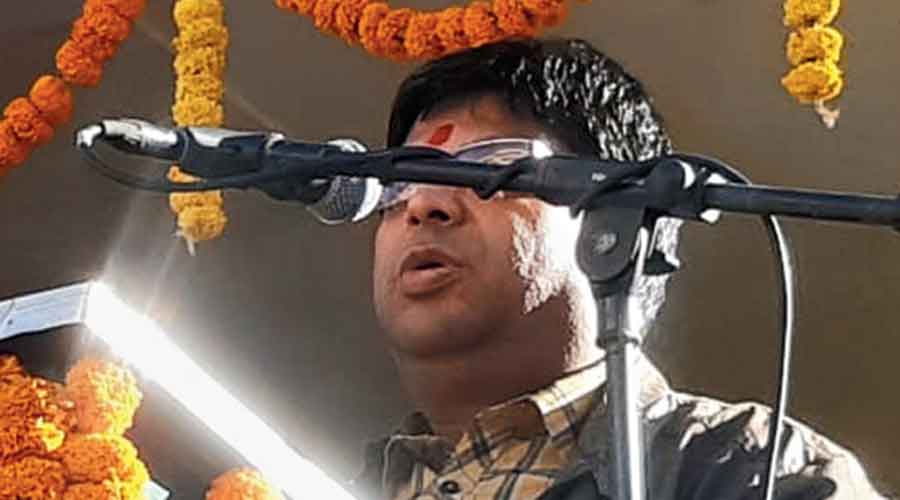 Roshan Giri, the second-in-command of Gorkha Janmukti Morcha’s Bimal Gurung faction, on Sunday appealed to people to “uproot” the BJP from the region.

At the public meeting in Kurseong, Giri’s first in the hills after more than three-and-half-years, he took on the BJP, the party with which the Gurung faction last month severed ties after 11 years to ally with the Trinamul.

For 11 years, no “permanent political solution” came about in the region, Giri said at the well-attended rally that lasted for over three hours from 11.30am.

The meeting had two clear messages —  attack the BJP and the Morcha’s Binay Tamang-Anit Thapa camp, though both Gurung and Tamang factions are now allies of Trinamul.
Their support to TMC was a “political decision, political strategy”, Giri said, adding that they had not sold out the Gorkhaland dream. 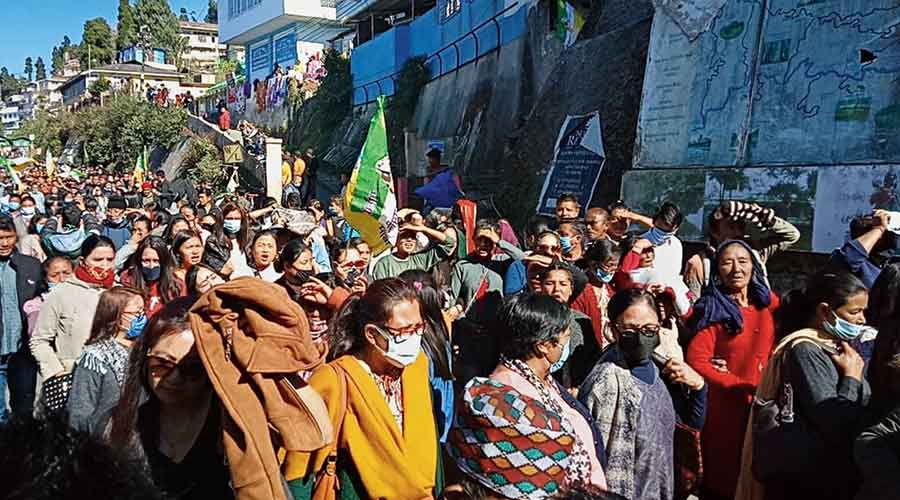 Gorkhaland is as emotive issue from the hills that no party can afford to ignore, but both Trinamul and the BJP state committee are against the formation of a Gorkhaland state.

Giri said that the BJP could not be trusted as their tallest leader Narendra Modi had during his election campaign for the 2016 Bengal assembly polls had specifically talked about starting a process to grant tribal status to 11 hill communities. “But till date nothing has happened,” said Giri. He added that previous Darjeeling BJP MPs also did precious little.

Giri pointed out that the BJP in its 2019 Lok Sabha election manifesto had promised “a permanent political solution” and “granting of tribal status” to 11 communities from the region.

The region did not make any headway despite the BJP-led NDA being in power in the Centre since 2014, he said. “We met Rajnath Singh (the former home minister) 23 times. The agitation was withdrawn (the 104-day continuous strike in 2017) on the assurance that a meeting would be convened within a fortnight, but in vain,” said Giri.

This year, Giri said, Union home minister Amit Shah held a meeting with the Gurung faction in July 21. “A delegation that included party president Bimal Gurung, me, Nima Tamang and Binu Sundas (a professor in Delhi University but from Kurseong), met Amit Shah and he said that he would look into the issue (of tribal status) after Assam assembly elections,” said Giri.
Assam Assembly elections are scheduled for 2021 almost around the same time Bengal goes to polls.

The Bimal Gurung faction also seemed angry that the agenda of tripartite meetings called by the Centre changed from GTA to Gorkhaland to GTA again.

“We wanted discussions on Gorkhaland but the agenda was changed to GTA. This was because of the Bengal BJP,” Giri said trying to explain their need to support Trinamul during the upcoming Bengal elections.

“During the 2024 Lok Sabha election, we will support the party that takes forward the Gorkhaland demand,” added Giri.

“The BJP is only interested in expanding their party base. We have to uproot them from the region,” said Giri.

Attacking the Tamang faction and the GTA, Giri claimed that funds to the tune of Rs 1,700 crore had been pumped to GTA in the last three years and only 30 per cent of it had been utilised. “During our tenure (in the GTA), there were three audits…there must be accountability now,” said Giri.

Allegations of nepotism and corruption, right from teachers’ appointment to development work, were levied against Binay Tamang-Anit Thapa camp.

Giri also said that Bimal Gurung would hold base in Siliguri after the December 6 public meeting and visit different parts of the region.