A day after the results of May 2, the EC had suspended all elections indefinitely in view of the pandemic 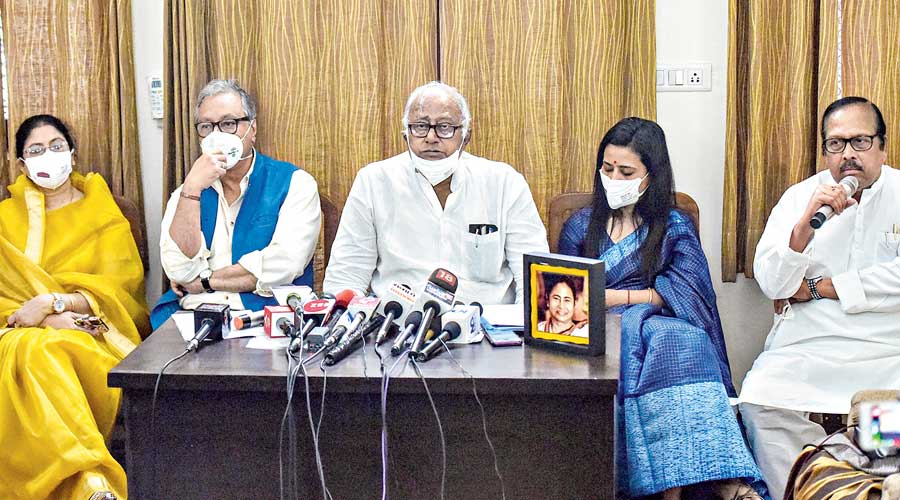 A delegation of Trinamul MPs met the top brass of the Election Commission of India in New Delhi on Thursday, urging it again to hold pending bypolls to seven Bengal’s Assembly seats now when the Covid-19 situation in the state is under control.

The bypolls assume importance as chief minister Mamata Banerjee needs to win an Assembly seat before November 5, 2021, six months from the day she was sworn in, to stay on as chief minister. Mamata had lost Nandigram to Suvendu Adhikari, her former cabinet minister who joined the BJP last December.

“The meeting with the commission was quite cordial. The commission said their purpose is to hold the elections and not withhold them,” said Roy later.

In Thursday’s memorandum, Trinamul attached a graph comparing Covid-19 cases in the seven Assembly seats between April and now.

“We told them the situation right now is conducive for polls as the number of Covid-19 cases has declined drastically across the state. We gave them specific Covid-19 statistics for the seven constituencies. The commission said they would consider it,” Roy added.

The BJP, labelling Mamata as a “non-MLA CM”, has steadfastly opposed the bypolls. BJP state unit chief Dilip Ghosh on Thursday claimed there was “no suitable environment” for bypolls in Bengal.

A day after the results of May 2, the EC had suspended all bypolls indefinitely in view of the pandemic. The decision came at the end of an eight-phase election for Bengal that took over two months, apparently desired by none of the key stakeholders other than the BJP.

Trinamul fears that the EC, despite its assurances on its willingness to hold the bypolls, might cite the third wave of the pandemic as an excuse to defer the process further, something that has been the BJP’s persistent demand, apparently because it does not want Mamata to be able to shed the “non-MLA CM” label.

However, the BJP at the same time has been pushing for elections to the 120-odd civic bodies in the state.

Mamata Banerjee and her party have repeatedly asserted that if the Bengal polls over an unprecedented eight phases could be held during a viral peak, when Covid-19 positive confirmation rate reached 33 per cent by phase eight, there was no ground to withhold the pending bypolls now when that rate is below 2 per cent.

Mamata, who lost to Adhikari by a margin of 1,956 votes, however led her party to a historic 213-seat victory in the 292 seats that went to polls.

She is now likely to return to her home turf of Bhowanipore, vacated by agriculture minister Sobhandeb Chattopadhyay in May for her.

“If the commission does conduct the polls, we will participate. But we have already written to the commission, detailing under several points why bypolls in Bengal cannot and should not be conducted now. We are against the idea,” said Ghosh.

Several sources in the BJP state unit admitted on the condition of anonymity that the party also fears a “0:7 result” in the bypolls if they are held now.