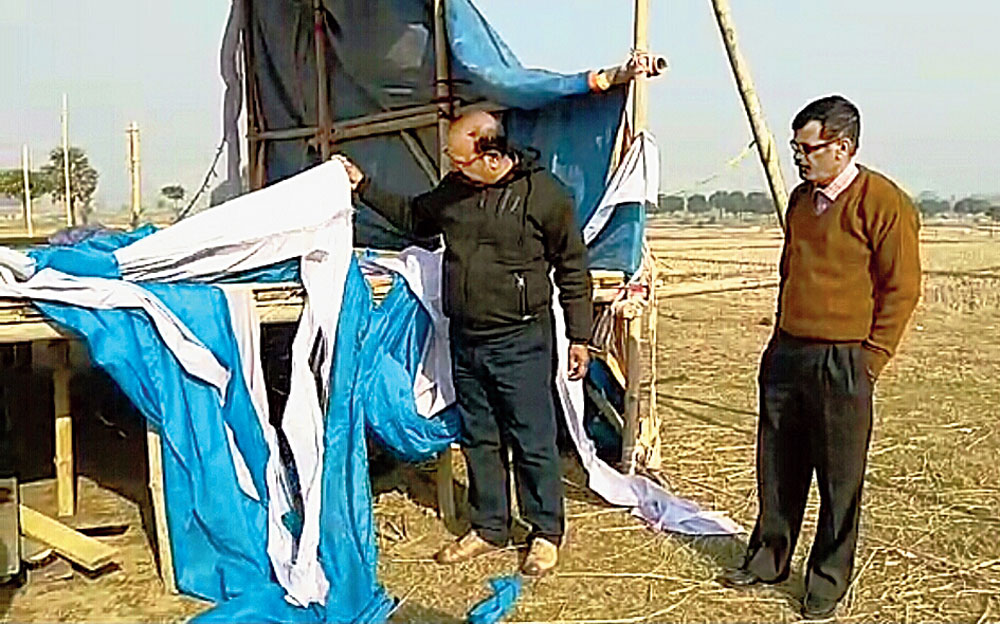 A dais erected by the Trinamul Congress for a public meeting to be addressed by MP Mausam Noor was found ransacked at a ground in Malda’s Habibpur on Wednesday morning.

The ruling party has cancelled the meeting scheduled for Wednesday and alleged that the BJP was behind the vandalism.

Mausam, the Malda (North) MP, had switched from the Congress to Trinamul recently. The meeting was planned at the Rice Mill Ground in Habibpur.

“The meeting would have been the first of Mausam following her switch in the Habibpur block which is under her Parliament constituency. The meeting was important as she had already been declared as the Trinamul candidate in the seat by our party chief Mamata Banerjee. The BJP damaged the dais to foil the meeting,” said Prabhash Chowdhury, the Habibpur block president of Trinamul.

Political observers said Trinamul had been focussing on Habibpur and Bamangola blocks, where the BJP had bagged panchayat samitis and a number of panchayats. The BJP has also won six zilla parishad seats in the rural elections in the district last year.

“Trinamul hopes it can wrest Malda (North), a seat it has never won, this time by banking on Mausam’s popularity. The BJP, too, is buoyed by the rise in its support base in the Habibpur and Bamangola blocks,” said an observer.

Chowdhury and other Trinamul leaders visited the Rice Mill Ground. The platform of the dais was made of bamboo and wood with clothes on sides. The platform was damaged and clothes torn.

“We have filed a police complaint. All those involved in the vandalism should be arrested,” Chowdhury said.

Mausam also blamed the BJP for the ransack.

“Ahead of the Lok Sabha polls, such meetings are held at block levels to strengthen relations with people. The BJP is feeling disgruntled as thousands of people have turned up at the meetings. The party has engaged anti-socials to prevent our political activities,” she said.

The BJP has denied the charge and said factionalism in Trinamul was to blame for the vandalism.

“Many Trinamul members are irked by the leadership’s decision to induct Mausam Noor into the party. The decision to field her in the Lok Sabha polls further agitated them. The schism in Trinamul widens day by day and whatever happened at Habibpur was the fallout of the factional feud. Our party never does such things,” said Ajoy Ganguly, a district BJP leader.

Bipul Majumdar, the deputy superintendent of police of Malda, said searches were on to round up the vandals.