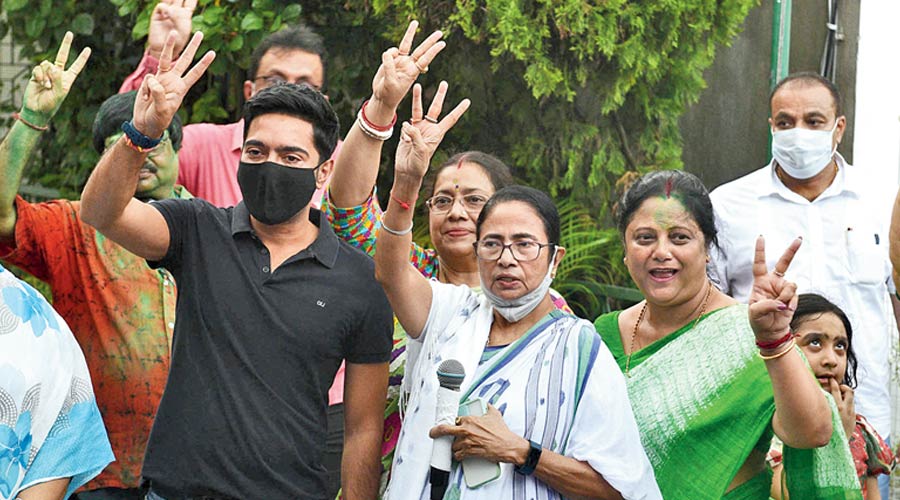 Mamata Banerjee and her nephew Abhishek Banerjee near the chief minister’s residence in Kalighat, Calcutta, on Sunday after her victory in the Bhowanipore bypoll.
Picture by Pradip Sanyal
Alamgir Hossain   |   Berhampore   |   Published 04.10.21, 02:17 AM

The Trinamul Congress on Monday improved its tally in the Assembly as the party bagged two more seats from Murshidabad — Samserganj and Jangipur — that had gone to polls on September 30.

The Election Commission of India had called off the polls in the two constituencies this summer as Congress candidate from Samserganj, Rezaul Haque, and the Revolutionary Socialist Party nominee from Jangipur, Pradip Nandi, had died of Covid-19 in April this year.

“We have won both the seats with handsome margins.… Our party’s victory makes it clear that Tinamul is the only major political force in Murshidabad,” said Mohammed Ali, Trinamul MLA from Lalgola.

Amirul won Samserganj by a margin of 26,111 votes defeating the Congress’s Zaidur Rahaman. Hossain, a former MLA and a minister who had been injured in a bomb explosion at Nitmtita railway station in February this year, won by 92,365 votes defeating the BJP’s Sujit Das in Jangipur.

“This is the first time that Trinamul will be sending 20 MLAs out of 22 from this district.... This is very significant,” said Ali.

Two seats — Berhampore and Murshidabad — in the district went to the BJP in the March-April polls. 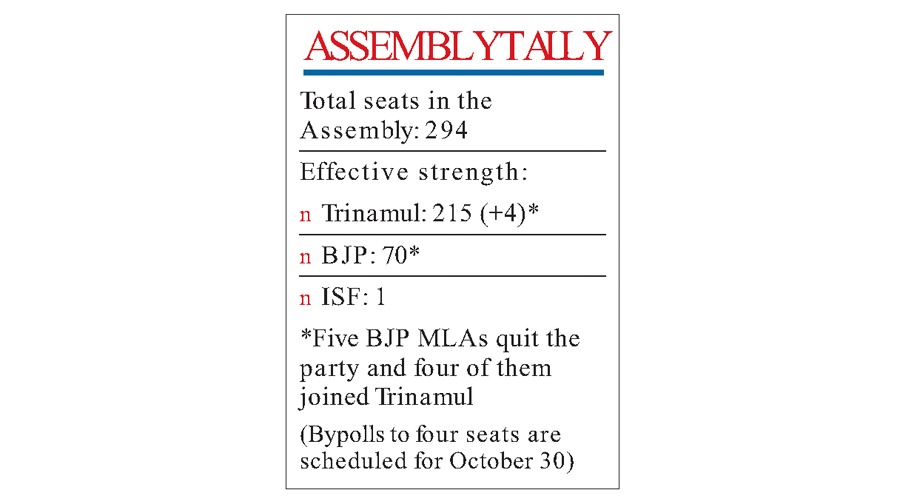 In the 2016 Assembly polls, Trinamul had won only four seats in the district. The party’s tally was just one in the 2011 Assembly polls, which it fought in an alliance with the Congress.

Trinamul sources have said the victory in the two seats in Murshidabad is very significant as the district, which has over around 70 per cent Muslim voters, has always been regarded as a Congress bastion.

“The BJP’s divisive policy helped us significantly in the district as Muslim voters rallied around us realising that only Mamata Banerjee could effectively resist the BJP,” said a Trinamul insider.

Although the twin victories came as good news for the ruling party, sources said the Trinamul leadership was unhappy with the margin in Samserganj.

“Zakir’s victory was stupendous as he won by 92,365 votes, but the margin at Samserganj could have been better.… We have decided to probe the reasons behind lower than expected margin in these two seats,” said a senior Trinamul leader.

The Congress had an alliance with the Left Front in Jangipur and the RSP candidate Jane Alam Mia was fielded there but the party fought separately in Samserganj. In Samserganj, the Congress fielded Zaidur Rahaman, brother of Trinamul MP Khalilur Rahaman.

“The Congress fielded a candidate in Samserganj. But the candidate was confused primarily whether he would contest the polls and we lagged behind in campaigning there. We got only a week’s time to campaign, and we are happy with our performance,” said Adhir Ranjan Chowdhury, the Bengal Congress chief.

After the Bhowanipore bypoll victory, Mamata Banerjee said: “I will forever be indebted to the people of Bhowanipore.” She added she had forbidden victory rallies by her party, asking everyone to celebrate by helping out the flood-affected.

The Trinamul Congress will field for the October 30 bypolls Udayan Guha in Dinhata, Brajakishore Goswami in Santipur, agriculture minister Sobhandeb Chattopadhyay in Khardah and Subrata Mondal in Gosaba. Mamata said her party would appeal to the poll panel against allowing any outdoor campaign by any party from October 10 to 20 in view of Durga Puja.