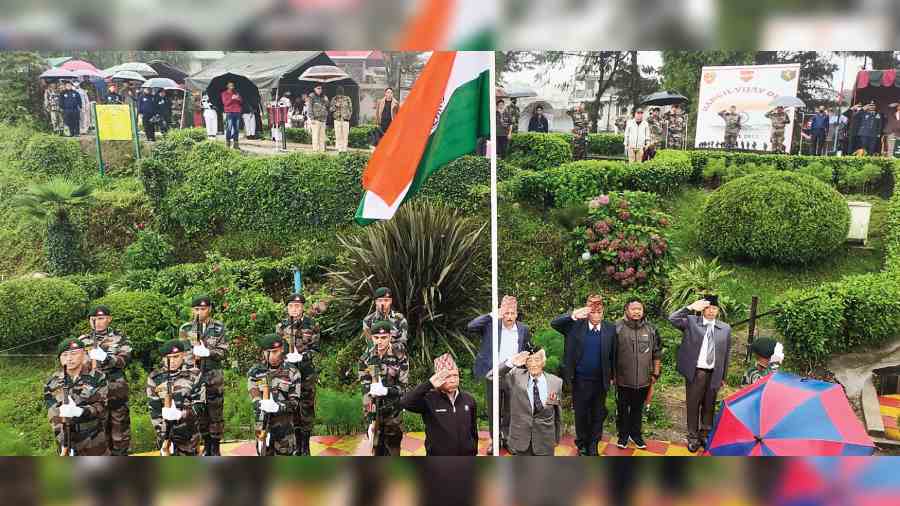 The Tricolour was hoisted (in picture) at the Batasia war memorial in Darjeeling to mark Kargil Vijay Diwas.
The Telegraph   |   Published 27.07.22, 01:46 AM

The Tricolour was hoisted (in picture) at the Batasia war memorial in Darjeeling  to mark Kargil Vijay Diwas.

The day is celebrated every year on July 26 to mark India’s victory in the Kargil War of 1999.

The Trishakti Corps of the Indian Army, headquartered at Sukna, on the outskirts of Siliguri, also held a series of events on Tuesday. Schoolchildren laid wreaths at the Trishakti war memorial and visited the Trishakti Heritage Complex in Sukna.

At Bengdubi military station, schoolchildren visited the Captain Vikram  Batra Motivation Hall and got an insight into the weapons and equipment of the army. Children also watched Shershaah, a film on the life of Captain Batra who lost his life in the Kargil war.

Events leading up to this day started last month in this region. Motivation lectures by Kargil war hero Subedar Mehar Singh were held in schools of Gangtok, Sikkim, on June 26 and 28.  The Shaurya Utsav was held on July 16 in Sukna where Lt Gen Tarun Kumar Aich, the GOC of Trishakti Corps, felicitated war widows and heroes.

On July 23, saplings were planted at the Sevoke military station.

Bengal on Tuesday reported 1,232 Covid-19 cases, 2,595 recoveries and seven deaths. Currently, the state has 21,287 active cases, according to the bulletin.