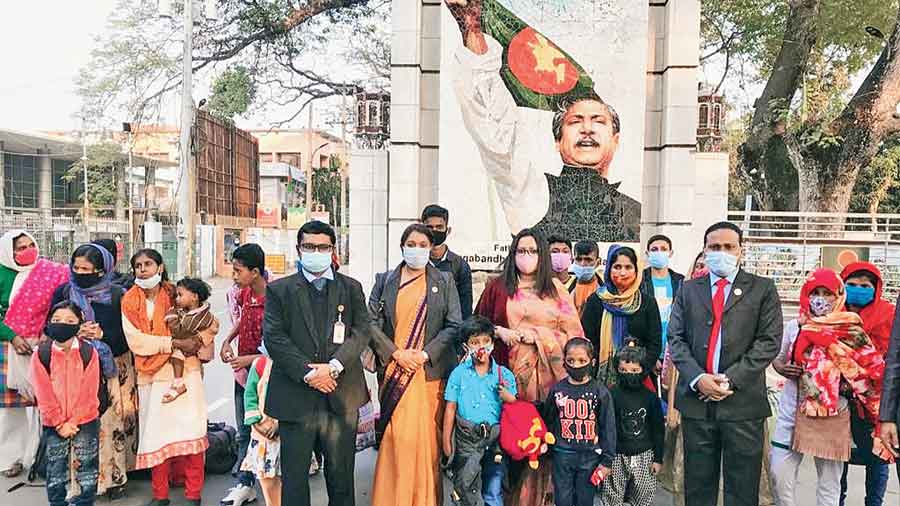 Officials of the Bangladesh high commission and the Bengal government with the women and children at Petrapole land port
The Telegraph
Subhasish Chaudhuri   |   Kalyani   |   Published 09.01.22, 01:38 AM

In a joint initiative undertaken by the Bangladesh Deputy High Commission in Calcutta and Bengal government’s women and children development and social welfare department, 21 Bangladeshi women and children, who had been trafficked to India, were repatriated on Friday.

This was the fourth such repatriation initiative jointly undertaken by Bangladesh and Indian authorities during the past one year.

The team of repatriated Bangladeshi nationals, included 15 women and six boys, who were languishing at various safe homes in Bengal. They were sent back home to Bangladesh through the Petrapole border in North 24-Parganas, where first secretary (political) & head of chancery, Bangladesh, Shamima Yeasmin Smrite was present to complete the repatriation process.

A communication issued by the Bangladesh Deputy High Commission in Calcutta stated that it came to know about many Bangladeshi women and children, who are victims of trafficking and unlawful border-crossings, were stranded at various safe homes in Bengal.

“Later with the support of the Ministry of Home Affairs of Bangladesh, the nationality of those trafficked women and children were verified and accordingly, the Deputy High Commission in Calcutta issued travel permits and initiated necessary processes for repatriation,” the communication stated.

The Bangladesh Deputy High Commission has also welcomed the initiative taken by the Bengal government and the central government agencies to curb the menace of trafficking.

BSF and Bengal home department sources claimed that a few hundred Bangladeshi women are trafficked to India every year through the porous borders. Most of these women, who are trapped by agents back home with the promise of jobs in malls, salons, shops in Calcutta, Delhi, Mumbai, and Bangalore, eventually end up joining flesh trade.

A senior officer of the BSF’s South Bengal Frontier in Calcutta said: “Every month we intercept Bangladeshi women, most of whom are victims of trafficking. In many cases, we as a goodwill gesture hand them over to our Bangladeshi counterparts so that they can return home safely.”