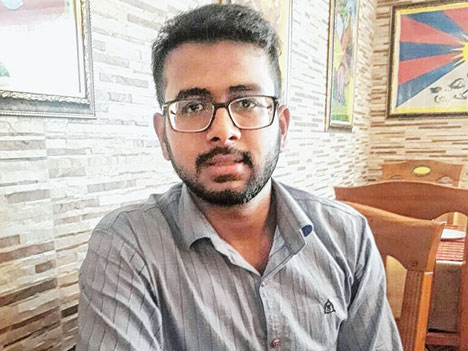 Darjeeling: A research student of IIT Mandi has developed an automated weather system which can also detect soil movements prior to landslides for as little as Rs 20,000.

Subham Agrawal, who hails from Rajasthan, has built a prototype that has been taken from the laboratory to the ground, successfully.

The soil movements can be detected by the use of multiple tools like inclinometer but the cost of the total set-up would run into lakhs of rupees. An automated weather system, which gives real time information on temperature, rainfall and pressure alone comes for about Rs 1.30 lakh.

Praful Rao, the president of the Darjeeling Himalaya Initiative, a non-profit organisation, who has set up an automated weather station in Kalimpong, said: "I got the weather system installed for Rs 1.30 lakh but it does not give real time data on ground movement. If this instrument comes for Rs 20,000, data will be more easily available for people."

Agrawal, 23, who has founded a company, IOTS, has decided to install the equipment at Himali Boarding School in Kurseong on Sunday.

"The system is based on micro electro mechanical sensors and we have already installed it at Gadpa and Hanogi along NH21 in Mandi, Himachal Pradesh, in July 2017. It has been a success and we are looking at commercially manufacturing the machines with customisation," said Agrawal.

He said the real time data were uploaded on landslidemonitoring.esy.es every 10 minutes and "if there is a major deviation from normal readings, a text message can be sent to intended users, or mobile applications and even connected with traffic lights for early warning".

The sensors are bored into the ground ranging from six inches to 6m depending on the region.

Subham and Akash Rohila, the project associate, demonstrated the equipment here during a national seminar on landslides, earthquakes and climate change in the Indian Himalayan region.

Chandan Ghosh, the head of the geo hazards department at the National Institute of Disaster Management, said: "It needs a little bit of customisation before it is comes out in the market."

Agarawal said such micro electro mechanical sensor was also being developed by researches in the Philippines and Italy. "However, it is yet to be come out from the laboratory stage," said Agrawal.

The creators of the equipment said the maintenance cost was minimum. "Sensors can be changed for Rs 800. However, we are working on more factors before we bring it out in the market," Agarawal said.