The apps are available in over 20 languages that include Bengali, an official of the Sunderbans reserve said 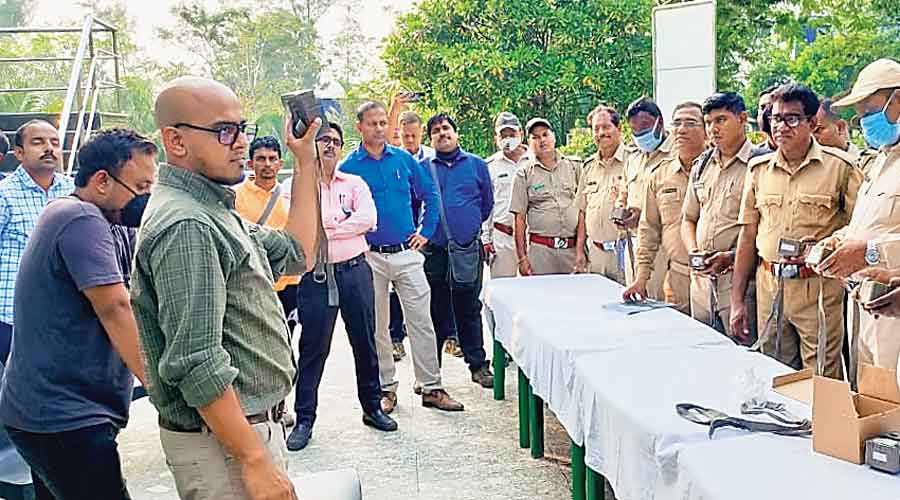 The tiger census across Bengal, part of the big cat count  across the country, will be totally digital and paperless this time.
Data will be recorded from ground zero (inside the core areas) to avoid human error and to save time.

The endeavour, which is set to begin from December 5, will use two applications — Polygon Search and Patrol — conceived and developed by the National Tiger Conservation Authority (NTCA). These apps will be used for the first time across India.

The apps apart, forest personnel are being trained to operate a software, M-STrIPES (monitoring system for tigers -intensive protection and ecological status), which was introduced by the NTCA, among others.

The apps are available in over 20 languages that include Bengali, an official of the Sunderbans Tiger Reserve said.
The estimation will be carried out across south and north Bengal.

At least 12 teams equipped with the devices loaded with the two applications will be engaged for the estimation programme. The personnel will get hands-on training about the application soon. The forest department concluded two days of training of trainers on Thursday at Sajnekhali, one of the crucial sites in south Bengal for the tiger count.
Speaking to The Telegraph, Sunderbans Tiger Reserve’s deputy field director Justine Jones said: “The edition of the tiger estimation programme is absolutely going to be pen-less and paperless due to usage of the two apps. On previous occasions, the apps were used in only a handful of forest areas as a pilot project. But this time this will be a pan-India affair to ensure accuracy in recording data in a short time.”

“Before undertaking the estimation we are imparting training to officials, who will train other team members,” Jones said.

“The objective of the training programme is not just to make the officials aware about the new technology but at the same time to accustom them with the scientific protocols set up by the NTCA and the Wildlife Institute of India (WWI) authorities,” he added.

The national estimation of tigers is done every four years by the NTCA along with the Dehradun-based WWI.

The last national estimation was carried out in 2018, which spotted 88 tigers in the Sunderbans. However, a subsequent in-house estimation during the next two years recorded  96, an official of the Sunderbans Tiger Reserve said.

In the proposed fresh estimation, the existing GIS patrolling module, entire field data relation transect lines, carnivore and herbivore signs will be loaded in the two apps for the actual estimation.

NTCA authorities have planned to release a summary report of fresh estimation on July 29 next year, World Tiger Day.

Actual work of the census will begin with installing trap cameras from December 5 in the Sunderbans.“In the first phase we will install trap cameras at 748 locations to monitor the movement of tigers and other animals. The entire process will be over by February next year,” Jones said.

Budhwaraj Sewa, field director, Buxa Tiger Reserve (BTR), told this paper that tiger estimation was likely to begin in January in all the forests of north Bengal.”
He said methods of direct sighting and indirect evidence collection would be employed in the estimation exercise.

The forest department will place 75-odd trap cameras in north Bengal forests. Though most of Bengal’s tigers are in the Sunderbans, north Bengal’s Neora Valley National Park in Kalimpong has reported big cat sightings.

A few years back, locals had sighted a tiger at Neora Valley, situated at an altitude of around 10,000 feet.

Sources also said that even though no tigers have been recently spotted at Buxa Tiger Reserve in the Dooars region of Bengal, there were plans to introduce the big cats in the region.
Along with the tiger estimation, a census on big herbivores like deer, antelopes, guars, rhinoceroses and elephants among others would also be conducted.