Tenzin Dhondup, 28, and Tenzin Nima, 24, had entered the Himalayan state through Rangpo, about 40km from Gangtok 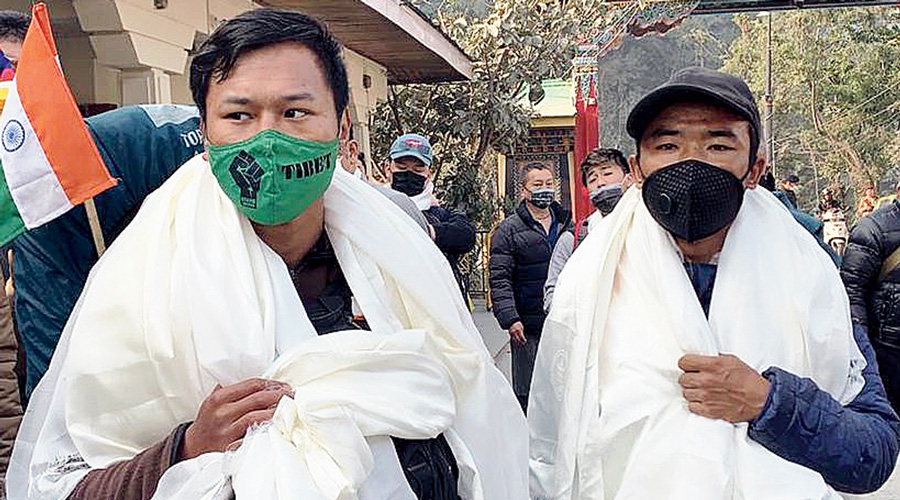 Two Tibetan youths reached Gangtok on Tuesday after trekking for over 2,000km from Dharamshala in Himachal Pradesh and Chandigarh in their mission to spread awareness of Chinese activities in Tibet and against India.

Tenzin Dhondup, 28, and Tenzin Nima, 24, had entered the Himalayan state on Monday morning through Rangpo, about 40km from Gangtok, where they were given a rousing welcome by Tibetan activists and local people. They were offered khadas (traditional scarves) and feted at a small programme where speakers hailed their mission.

Dhondup started the trek, ‘Dharamsala to Nathu La’, from the Himachal Pradesh town, where the Tibetan government-in-exile is headquartered, on November 2. Nima joined him later from Chandigarh. They then jointly traversed through seven states before entering Sikkim.

Dhondup said three objectives of his mission were to spread awareness of China’s continuing degradation of Tibet’s environment, urge the global community to recognise Tibet as an occupied country, and boycott goods made in China in view of the country’s recent attacks against India on the Indo-Tibet border.

“I chose to hike because I felt I would be able to meet and interact with more people and spread my message. I managed to achieve that during my journey till here,” said Dhondup. Asked if he encountered any problem during his long walk, Dhondup said it was not worth talking about them since the mission was more important.

During his and Nima’s onward trek from Rangpo, scores of members of six Tibetan associations based in Sikkim gave them company. They plan to resume their walk to Nathu-la on the Indo-Tibetan border, provided the state government gave them permission. Visitors are barred from travelling to Nathu-la.

Nima said he chose to join his namesake Tenzing on his walk from Chandigarh in order to support him. “Environment is a global responsibility. Human rights, too, is everybody’s responsibility. I did this (walk) to spread awareness (of those issues),” he said

Uden Aukartsang, a member of the Tibetan parliament-in-exile, said any initiative and activism that aided the overall freedom struggle was essential.

“Most importantly, we want India to have a very clear policy on Tibet, and recognise Tibet is an occupied country. It is in India’s interest to really support, you know, Tibetan freedom struggle. I think it is very crucial,” she said.

R. P. Poudyal of the Bharat-Tibet Sahyog Manch lauded the Tibetan youths on their mission and urged all the people to extend support to them.

“The larger message of these youths is freedom for Tibet, halt to the continued oppression of Tibetans and protection of the Himalayan environment. We the Sikkimese people congratulate them,” he said.