Three witnesses give versions on Bogtui carnage to court

14-year-old among three whose statements submitted to Rampurhat judge 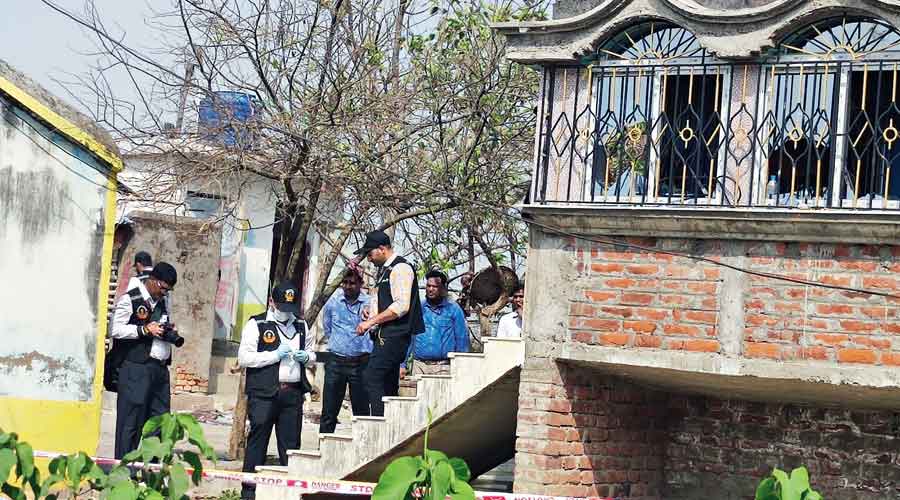 The CBI team probing the Bogtui massacre on Tuesday got the statements of three eyewitnesses, including a 14-year-old boy, recorded in front of a judicial magistrate at Rampurhat court as the agency began preparations to file a report to Calcutta High Court on Thursday.

Sources said the statements of the trio were vital since all of them had witnessed how armed goons had turned up with jars of fuel and resorted to violence and arson at Bogtui on March 21 night. Nine persons, including seven women and a child, were killed in the incident.

“The three are family members of a deceased person. They have shared a few names and details while narrating how the crime was committed,” said a CBI official.

“The statements would be part of the report that the agency would have to submit to Calcutta High court on April 7,” the official added.

The 14-year-old boy, who had taken shelter at a single-storied grocery shop, had shared his experience with The Telegraph about how the goons had brought jars on two totos and emptied them through the gap between the door and the floor of the grocery shop before setting it on fire.

The CBI sources said they were trying to ascertain the source of the fuel that was used for setting the houses on fire and believed that the attackers had possibly purchased it from a pump before carrying it in plastic containers or jerry cans. Experts of the Central Forensic Science Laboratory (CFSL) had already collected samples from the totos.

The CBI collected hundreds of fingerprints from different gutted houses, along with several articles like sharp weapons and plastic containers.

The sources said the sleuths had collected the fingerprints of all the accused and would match them with those gathered from the spot to confirm their involvement in the crime.

The CBI on Tuesday questioned three officers of Rampurhat police station who had recorded the statements of the accused before the case was handed over to the central agency. The sources said all those statements would be also part of their report to ascertain whether the cops had performed their duties to avert the massacre.

The CBI officials, along with a few officials of the central public works department, went to Bogtui village and again mapped the distance of the houses that were set ablaze.

The sleuths again interrogated Trinamul block president Anarul Hossain to know whether he had played a role in the attack.

CBI sources said they were in the process of wrapping up their preliminary probe and it would start a more extensive investigation after submitting the primary report.

The CBI officials  on Tuesday visited the Barshal gram panchayat office and sought details of an accused in the massacre case, who seemed to be a minor. Bhadu Sheikh, the Trinamul leader who was killed on March 21, was the deputy chief of the gram panchayat.

The CBI on Tuesday interrogated Suresh Tiwary, son of former Rampurhat municipality chairman Aswini Tiwari, for over two hours to know how the CCTV footage of the Bhadu Sheikh murder was leaked even after the CBI had seized it.

Aswini said the CCTV footage had been first taken by the police on March 21 night when Bhadu was murdered. The CBI seized the footage five days ago.