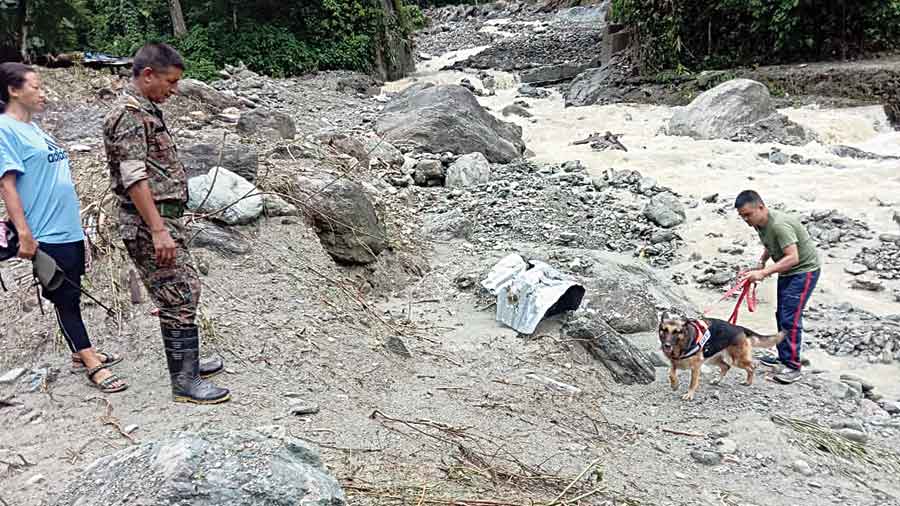 Three workers associated with the Sevoke-Rangpo rail project, whose tent was swept away by the swollen Mamkhola hilly rivulet in Kalimpong district on Friday, are still traceless.

On Friday, as their camp was washed away by the rivulet running between Rangpo and Melli, and debris fell on the site, two workers had lost their lives and two others were rescued.

However, Arun Rai from Tarkhola of Kalimpong, Bikash Tamang of Sangsey, also in Kalimpong, and Damber Ram, who is from Nepal, went missing.

“Search is on to locate the missing workers. Every effort is on to find them,” said Hari Krishna Pai, the SP of Kalimpong said. The site where the incident happened is around 23km from the district headquarters.

The swollen rivulet as well as the debris it brought down have also damaged a number of machinery at the site for laying the railway tracks, senior officials of the Northeast Frontier Railway (NFR) said on Saturday.

“Heavy monsoonal downpour had suddenly swelled the rivulet that is adjacent to the approach of tunnel 10 of the rail project. Three people are still missing. We have urged the NDRF to carry out the rescue operations,” said S.Chanda, the chief public relations officer of NFR.

Chanda added the water and debris choked the approach to the tunnel. Also, equipment like the boomer machine used to dig tunnels, a diesel generator and a concrete pumping machine have been damaged. “Experts will check the machinery,” he said.

Sources in the NFR said senior officers are worried over the back-to-back mishaps in the project in less than a month.

On June 17 this year, boulders had fallen at Bhalukhola, another site of the project. A portion of the tunnel had collapsed, leading to deaths of two workers. Five others had sustained injuries.

The Sevoke-Rangpo rail project is considered to be one of the ambitious railway projects of the country. The plan is to lay railway tracks along 45km to connect Sevoke station, which is some 20km from Siliguri, with Rangpo, the bordering town of Sikkim.

The project was initiated in 2009 by then rail minister Mamata Banerjee and aims to include the Himalayan state of Sikkim on the Indian railway map.

“It is indeed an uphill task (given the terrain). But we are confident that the project will finish by December 2023. The accidents have put us on alert and all necessary precautions will be taken,” said a senior official of NFR..