Group Captain Kishan, Mahendra Yadav and Sumendu were the participants in the expedition, which was fraught with uncertainty because of Covid-19 pandemic 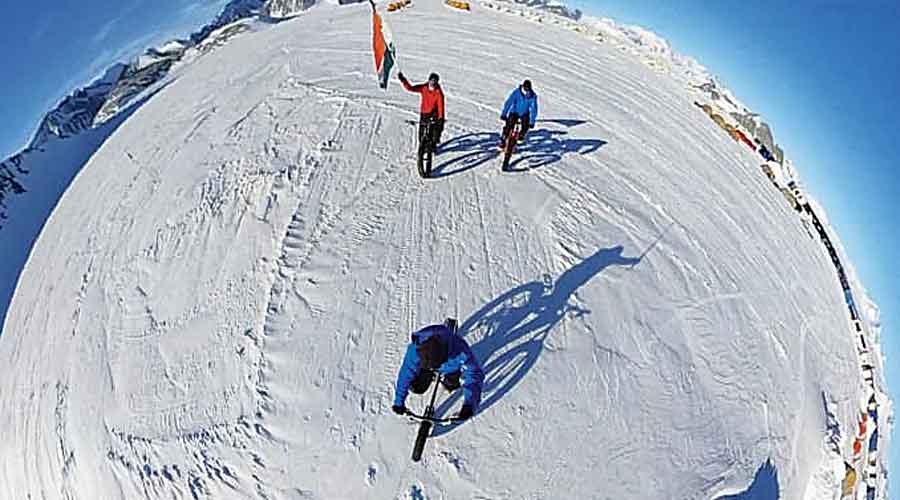 Three mountaineers from the Himalayan Mountaineering Institute (HMI), Darjeeling, went to Antarctica to display a giant-sized Indian Tricolour, performed yoga, cycled on a glacier, climbed the white continent’s highest peak Mount Vinson, and even managed to skydive over the Andes.

“The multi-feat expedition named Mission Antarctica 2021 was aimed at promoting patriotism through adventure among the youth and countrymen,” said Group Captain Jai Kishan, principal of the HMI and leader of the expedition. “The expedition had been approved by defence minister Rajnath Singh on August 17.”

Group Captain Kishan was accompanied by Mahendra Yadav and Sumendu of the HMI in the expedition, which was fraught with uncertainty till the last moment because of Covid-19 pandemic.

“Till November 18 (two days before the team’s scheduled departure to Antarctica) we had not received our visa. Indian officials at various levels worked really hard to make this expedition a success given the Covid pandemic and various restrictions in different countries,” said Kishan. “This is the reason why we kept the expedition team small.”

However, once the team reached the Union Glacier in Antarctica on November 26, 2021, there was no stopping them. Union Glacier is the landing point for all flights to the white continent.

Without taking a break, the team again flew to the base camp of Mt Vinson, the highest peak in the continent situated at a height of 16,050 feet, and unfurled a 7,500 sqft Indian flag, on November 27. Temperature there was hovering around -25 degree Celsius then.

“This flag had been unfurled at Mt Rhenock in the Sikkim Himalayas on April 25, 2021, to commemorate 75 years of India’s independence,” the air force officer said.

The team then started their climb to conquer Mt Vinson and hoisted India’s flag — not the giant-sized one — atop the peak on November 30, 2021, only to be greeted by a polar storm.

“For three nights, we had to brave and survive the storm. There were only around 12 people in the peak at that time. We were instrumental in rescuing two German climbers and getting them down safely to the base camp,” said Kishan.

On December 4, the Indian team performed yoga at the base camp and two days later, the team once again displayed the 7,500sqft national flag

at Union Glacier, with a Russian team agreeing to take drone shots of the event. They brought back this flag with them.

The team decided to cycle on the Union Glacier on December 7 before moving on to Santiago, Chile.

The HMI principal and his team successfully skydived over the Andes in Chile from an altitude of 13,500 feet, displaying a banner of 75 years of Indian Independence on December 12. They reached Darjeeling on December 17.