The way forward for East-West Metro 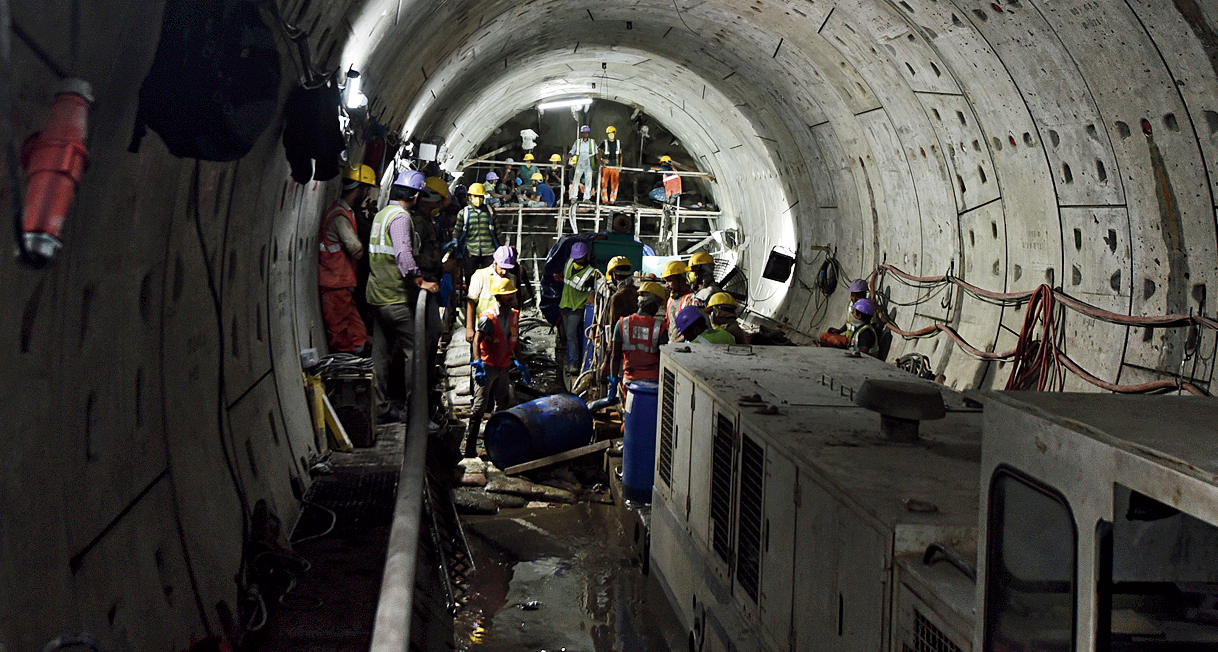 Engineers are considering the option of digging the remaining part of the affected tunnel of East-West Metro using the machine that is burrowing the other tunnel of the project.

One option is to let the machine, stationed close to the one that became defunct after hitting an aquifer in Bowbazar on August 31, burrow till Sealdah. There, it will make a U-turn and start burrowing the rest of the affected tunnel, proceeding towards Bowbazar.

Both machines were moving from Esplanade towards Sealdah till work was stopped indefinitely after the mishap.

Another option under consideration is to build a shaft through which parts of the damaged boring machine can be retrieved and a new one lowered into the tunnel.

Engineers supervising crisis management in Bowbazar are working on various options to complete the underground link.

A team has been set up with engineers from Hong Kong and Australia, and led by British engineer John Endicott, to suggest how to continue with the tunnel-boring work, officials said.

The 16.5km East-West Metro corridor will stretch between Salt Lake Sector V and Howrah Maidan and run under the Hooghly.

The machine that ran into the giant aquifer was boring the tunnel through which Howrah Maidan-bound trains will run. Water from the aquifer entered the tunnel, triggering subsidence and damaging many houses.

More than 650 people have been evacuated.

The machine that hit the aquifer had burrowed 1,654 metres from Esplanade and is lying defunct about 750 metres from its destination, Sealdah station.

The second machine, burrowing the tunnel for Salt Lake-bound trains, is lying under Nirmal Chunder Street, about 400 metres from the defunct machine.

“The soil under the damaged machine has become soft following the accident. The soil needs to be strengthened before the other tunnel-boring machine can start moving again,” said Endicott, who has been involved in boring tunnels since 1975 and has worked in Hong Kong, Taiwan, Singapore, Thailand, Indonesia and also in Mumbai and Delhi.

He said the soil could be strengthened by injecting grout — a mixture of sand, cement and other items — from above.

“The problem is the second tunnel-boring machine could get stuck and become unusable if it remains stranded for long. If the machine remains stationery after another three or four weeks, the situation can become tricky,” said Endicott.

“I am mobilising my team to implement a long-term plan for completion of the tunnelling work.”

One of the members of the team is from Australia and three are from Hong Kong. There will be local engineers, too, in the team.

The options before the team of engineers:

Once the soil is strengthened after tests, Endicott said, the second machine (the one stranded in the unaffected tunnel) could move through the damaged section safely towards Sealdah.

“After it completes the tunnelling work till Sealdah, it can make a U-turn. There is a connection between two tunnels in Sealdah and that can be used for the U-turn of the machine,” said Endicott.

It can then start burrowing from the opposite end and finish construction of the tunnel till the damaged portion in Bowbazar.

A shaft can be built in Bowbazar to pull out portions of the damaged machine. But the challenge is to build a shaft in such a congested area.

“The machine has to be cut into pieces. Its 9metre-wide front shield and the first few metres of the concrete rings can be pulled out through the shaft. The remaining portions can be taken to Esplanade and pulled out from there,” said Endicott.

Metro has reported that portions of the two machines that had burrowed the twin tunnels under the Hooghly from Howrah Maidan till Esplanade were taken back to Howrah Maidan and retrieved from there.

“Once the machine is removed, the wall created (in the tunnel) to prevent seepage of water can be dismantled. Then the soil, leftover of concrete and parts of the tunnelling equipment can be cleaned through the shaft. We can make connection between the two tunnels,” Endicott said.

A second option is to launch a new tunnel-boring machine through the shaft. But the problem is a huge crane would be needed to transport the machine parts. Each machine part weighs around 300 tonnes, said Endicott. It will take a 1,000-tonne capacity crane to lift the parts.

Engineers think Bowbazar, a congested neighbourhood, lacks space for the movement of a big crane.

“The shaft through which the machine will be lowered needs to be bigger than the ventilation shaft. It should be at least 25 metres long and 10 metres wide and directly on the line of the tunnel,” said Endicott. He said the machine can burrow the tunnel till Sealdah and then reverse towards Bowbazar. The engineer said it would take more than a year to complete the tunnel.

2 A new tunnel-boring machine will be lowered into the affected tunnel through a shaft in Bowbazar. But transporting the machine parts through the crowded central Calcutta neighbourhood may pose a problem

3 The new machine will be lowered through a shaft built at a place which has more space than Bowbazar. A ventilation shaft, narrower than the one required to lower the new machine, is being planned between Bowbazar and Sealdah. Engineers said the ventilation shaft could be made bigger for lowering the machine