Advertisement
Home / West-bengal / ‘The party decided against Jyotibabu becoming PM... and later, Somnath Chatterjee was expelled... that is when our downfall began

‘The party decided against Jyotibabu becoming PM... and later, Somnath Chatterjee was expelled... that is when our downfall began 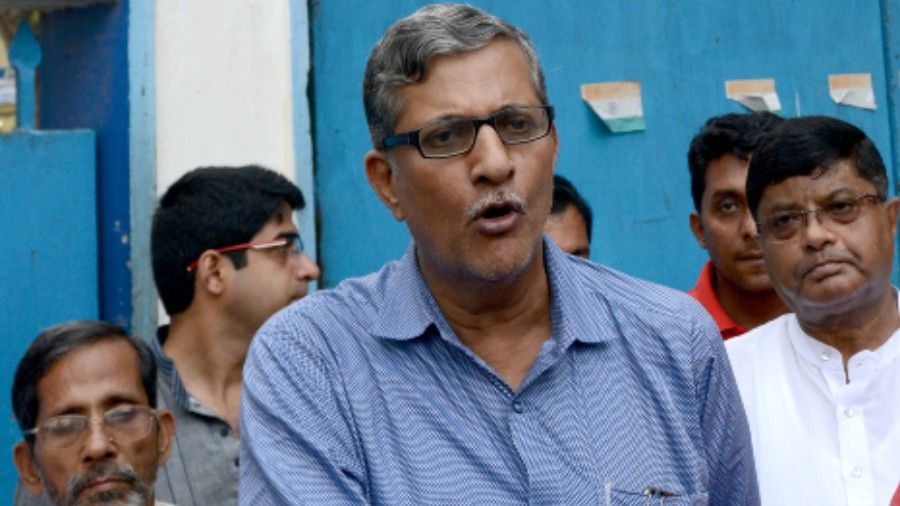 As the absolute defeat of the Left Front (LF) in the Bengal elections became clear on May 2, 63-year-old Tanmay Bhattacharya, sometime DYFI president, retired bank employee, former MLA from Dum Dum North and member of the district committee of the CPM, laid the blame at the feet of the state leadership on live television. The district committee has distanced itself from the views. Excerpts from a conversation with him:

Q: What according to you is the reason for the LF not winning any seats in this election?

A: This vote was a vote against Modi and the people did not have faith that the LF would be a viable alternative against him. The people gifted the captainship of this state’s fight against Modi to Mamata Banerjee. We can argue whether they are right or wrong but the truth is the people have entrusted Mamata Banerjee with the captainship of the state. So the first and most important thing for us is to bow down before this verdict of the people.

Q: Was aligning with the Indian Secular Front (ISF) a mistake?

A: The ISF is an umbrella organisation of nine different outfits, seven of them champion Hindu backward castes and tribes while two of them champion Muslim backward castes. The problem is that no one knows that ISF is a collection of these nine organisations. The only one everyone knows is Abbas Siddiqui, a pirzada. When both the BJP and the TMC are indulging in competitive communalism, the use of the word pirzada actually strengthens the hands of polarising forces. We were unable to establish the reality of the diverseness of the ISF and, unfortunately, Abbas himself failed to mention the various organisations and their demands in any of his speeches. In fact, he is not the secretary or president of the ISF but only its prishtoposhok or patron. He is a great speaker and a lot of people attended his meetings to hear him. But it has already been proven that attending meetings and voting for a party are not connected. We failed to take the truth to the people.

Q: Why do you think the LF has lost credibility in Bengal? Has the Left lost touch with ground realities?

Q: What is the way forward? Can the Left ever recover lost ground in Bengal?

A: The way to recovery will be long. In historical terms 15 years is a very small span of time, though it may encompass the entire youth of an individual. Communists will have to walk a long way. And, like Kakababu [Muzaffar Ahmed], I believe that you have to walk all the way on the path you choose, you cannot take any shortcuts. I do not expect the way to be paved with roses, part of the path will naturally be covered in thorns but we will have to cross it nevertheless. But before we start on this long journey, we will have to do a little planning. First is the need to set up a separate cell for data analysis, planning and execution. Second, to prepare for the next elections we should have workshops and should start preparing for them right now. Responsibilities should accordingly be delegated right now and possible candidates put to work in their respective constituencies.

The importance of social media cannot be underlined enough in these times and we need a professional team running it. We should stop depending on people who do it as a hobby. It is time to run the social media team professionally and in accordance with the party line.

I don’t know if the top leaders have this, if they don’t then we should have a statewise geographically defined demographic breakdown for each district. We should already be having this but I do not know whether everyone has all of it.

While we have had an infusion of youthful candidates for this election, many of them have not yet learned to read the voting process — bhot bojha. There should be workshops to address this weakness. There is something called a vote manager. These people work on the ground all through the year to gather data for candidates.

Instead of depending on cheap, gimmicky city-based politics, we should focus on our main labour organisations such as Citu and Krishak Sabha. We should be more proactive about building up movements based on definite, defined demands. Students and the youth are emotional, sensitive but a political fight cannot be based on emotions alone. A political fight demands maturity and awareness. What the party needs is not only new faces but an infusion of youthful thinking, of fresh ideas. If the party thinks that it will conduct an election the same way it did 30-40 years ago, it will think the same old thoughts and the only thing young will be the candidates, I am sorry but that does not mean it is thinking afresh.

Q: Is there a genuine sense of correction in the party? Does the party brass discuss the problem frankly?

A: This question can only be answered by the state leadership of the party. I am not a state leader, therefore I cannot and should not answer this question. That will be overstepping my limits. From where I am in the party, at my level, all I can say is that there is a very large gap between discussion on the issue and taking corrective measures. We are discussing a lot but implementing little.

Q: When did you think things began to go wrong with the Left? Was there frank introspection and criticism in the party over the direction?

A: People wanted Jyoti Basu to become the Prime Minister after the 1996 Lok Sabha elections but our party decided against it. I don’t know whether the decision was wrong or right but I personally believe it had an adverse effect on Bengali pride. The Left lost votes in the 1998 and 1999 Lok Sabha elections. Fortunately, we still had leaders like Jyoti Basu, Anil Biswas, Subhas Chakraborty. The leadership realised that votes were bleeding away, realised the potential of future losses and took corrective steps. Jyoti Basu finally retired, handing the baton to Buddhadev Bhattacharya. I think the 2001 Assembly elections was the toughest the Left had faced till then. According to analysts, there was a very large chance that the Left would lose the election. But timely corrective measures and able leadership prevented that. The expectations raised by the 2001 state government brought the LF its biggest victory in the 2004 Lok Sabha elections. We were asked to join the government but preferred to support it from the outside. Somnath Chatterjee became the (Lok Sabha) Speaker. But then, in 2008, we withdrew support from the Manmohan Singh government for a reason that people could not comprehend. We may have been correct on principle but people were unable to understand why we withdrew support and were disgruntled. The reaction was amplified when Somnath Chatterjee was expelled from the party for doing what many people thought was his duty.