The man who presides over a magic biryani 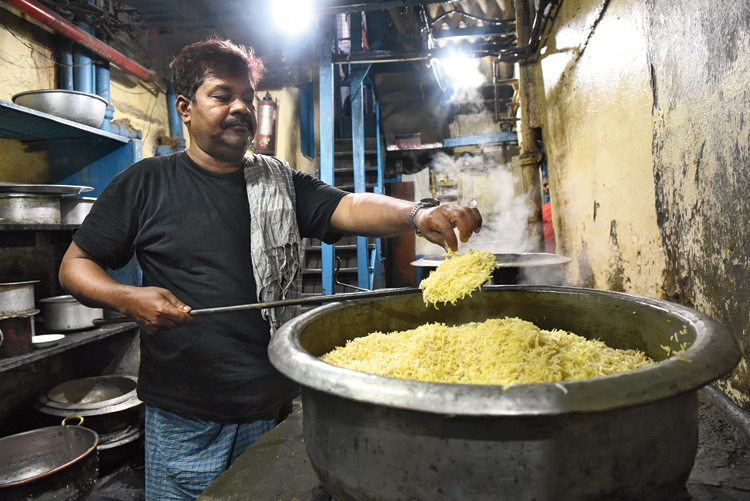 In Calcutta, there are as many schools of thought on the best biryani in this biryani-sensitive town as there are landmarks. But those who know — and they may not be the majority — swear by Aliah’s.

New Aliah, or Aliah, as we know it, stands at the crossing of Bentinck Street and Waterloo Street, and one could have passed it without noticing it, had it not been for the heady smells and a small crowd that pour out from it steadily. And when you are inside, and the biryani lands on the sturdy old marble tabletop with a soft thud, smoke wafting up from it gently, you know again that you were right. The biryani is robust yet light, full of flavours yet subtle. It is the best.

This, too, can be considered a Calcutta landmark.

The man presiding over it, however, refuses to think too much of himself. He just sees himself in charge of a menu in a restaurant that serves hundreds of customers every day. He is a little surprised about the interview.

Md. Karim, the head cook at Aliah, or master, now also referred to as chef, came to Calcutta when he was about 13. He thinks he is about 53 years old now. A soft-spoken man of small build, he tells his life story simply and briefly.

He came to the city from his village Dewtan Kharsan in Giridih, now in Jharkhand, then in Bihar, with his brother-in-law and joined the kitchen of a Mughal food restaurant in Free School Street.

In 1984, he joined Aliah as an assistant cook. He rose through the ranks quickly and became the head cook by ’87, when he was perhaps not yet 20. By then, he was already married. His wife lived mostly in the village, where she lives still, though she would visit him in Calcutta quite often.

At first, Karim used to live in the Taltala area in a shared room. Now he has got his own place in Alimuddin Street, where he lives with his youngest son, who is in college and wants to start his own business. His two elder sons are both working in Saudi Arabia, in the food business, and his daughter is married.

“What else do you want to know?” he asks, still quite surprised about the interview.

What makes Aliah biryani so special? “The quality of the ingredients,” he says. “Do you want the recipe?” Of course I do. He rattles off the spices, the amount of dahi, the ghee, in great detail. Yet nothing explains the magic of the biryani.

He also shares with me eagerly the recipes of the other Aliah masterpieces: the delicate, light rizala with a succulent piece of meat and a long, lean, solitary red chilli floating on it; the sizzling crispy mutton tikiya (the keema is mixed with sattu); the mutton stew, a most delicious, hot, spicy, onion-rich thick gravy; and the murgh musallam, a whole chicken cooked tenderly in a rich creamy spicy gravy.

And the firni. In Aliah, the milk is thickened to a caramel denseness for the firni. The same milk is used for the humble tea, which feels like velvet on the tongue, but is not too sweet.

With the biryani, all these qualify as the city’s best. Many may cite other restaurants, but again, the majority may not always be right.

Aliah was started by two brothers, Haji Md Ali Bux and Md Ali, in 1929, says the restaurant website. At the beginning, it was a small tea-and-snack place.

Aliah took its final shape when Md Ekram took over. The establishment became bigger when two adjacent bicycle shops were acquired. Ekram also set up the menu which continues unchanged, more or less, till date.

The only big change that happened was the addition of an “AC” upper floor to the brisk, bustling “non-AC” ground floor about a decade ago.

How is it that Aliah has withstood giving in to trends, not even starting a roll counter? Karim says that that is not his business; that is the way the establishment owners have thought. He is just a keeper of time-tested formulas, if a hawk-eyed one.

But yes, everything outside Aliah has changed, he says. It pains him.

The entire Bentinck Street area and the streets have been gobbled up by change drastically from around 2006, after the dance bars were closed down in Mumbai. Many of the dancers came to Calcutta for work, and dance bars began to be set up in this area.

Most of the affordable watering holes in the area were turned into dance bars. Since then the entertainment and the clientele for the restaurant business in the area has changed. The streets have also changed.

Between the Eighties, when Bentinck Street was lined with Chinese shoe stores, and now, when Aliah is flanked by dance bars, the place has changed utterly. “The cinemas have also shut down or are in a poor state: Orient, Paradise, Opera, New Cinema, Metro…” says another Aliah old-timer.

At the crossing of Bentinck Street and British Indian Street, parallel to Waterloo Street where Aliah stands, an alcohol store has replaced the old shop that made delectable small kachoris served with alu sabzi.

But biryani, as we know it now, is also a Calcutta invention, smiles the old-timer. “When we were young, we would have mutton kaliya with khuska, a pulao. It is from the Eighties that biryani began to be so popular in the city.” He thinks that the city, really, dreamed up the perfect food: rice, meat and alu, all together, at their best.

The popularity of halim, too, is a recent phenomenon. Now, one has to rush to Aliah during the halim season before four in the afternoon. Otherwise it is sold out.

This is change. Aliah has dealt it with well.