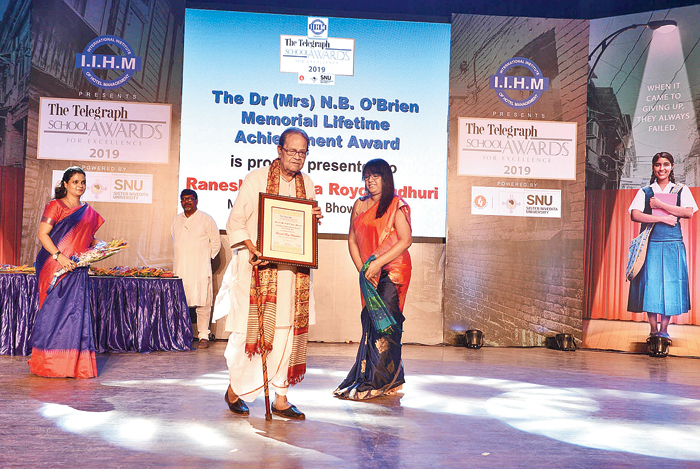 A teacher who prepared himself for class till the last day of his 30-year career and never hesitated to admit to students if he did not know the answer to a question has been flooded with messages from his students on his smartphone since Saturday.

Ranesh Chandra Roy Chaudhuri, 85, received The Dr Mrs NB O’ Brien Memorial Lifetime Achievement Award for a Teacher at The Telegraph School Awards for Excellence 2019, presented by IIHM and powered by Sister Nivedita University, and was escorted on stage by his students.

From Afghanistan to England, the congratulatory messages have been pouring in from far and wide. “Some of my students attended the awards ceremony but many others could not because of professional commitments and they have been calling me up or sending me messages and circulating photographs of me receiving the award,” said the former teacher of Mitra Institution, Bhowanipore.

Roy Chaudhuri believes a teacher’s job is not to teach but to “help the student to learn”.

“I have only helped them in their journey towards their goals. Even now, almost 25 years after my retirement, students remember me and some of them, with grey hair themselves, come to meet me and spend time with me. That is my asset,” said Roy Chaudhuri, who stays in Netaji Nagar.

Roy Chaudhuri borrowed much of his teaching methodology from Rabindranath Tagore, to whom he was introduced by his father, also a teacher of Mitra Institution. “My father used to read out Tagore’s advanced literary pieces to me and my sister when I was hardly 10. I only understood parts of it and wondered why he was reading such tough things to me,” said the former student of Mitra Institution.

After he joined his alma mater as a teacher in 1965, Roy Chaudhuri started reading Tagore’s writings about teaching. “The idea is to give young minds as much as possible; they will grasp whatever they can, and the urge to know the rest will push them to learn more,” he said.

Not only did he push his students to know more but he pushed himself as well. “If I had to make myself worthy of teaching I had to keep learning. If I didn’t know something my students asked me, I would say as much but find it out and share the answer with them later,” said the Asutosh College student.

A Bengali teacher who also taught Sanskrit and English, Roy Chaudhuri was as feared as he was revered. But he was always there for students when they needed him.

“I used to ask academically weak students to open their books and find the answers themselves; which kept them engaged and interested,” said Roy Chaudhuri, who used drawings to teach grammar to make a lasting impact on students’ minds.

A singer himself, Ranesh babu is the quintessential Bengali in his spotless white dhuti-panjabi and loves to sing Rabindrasangeet and classical music.