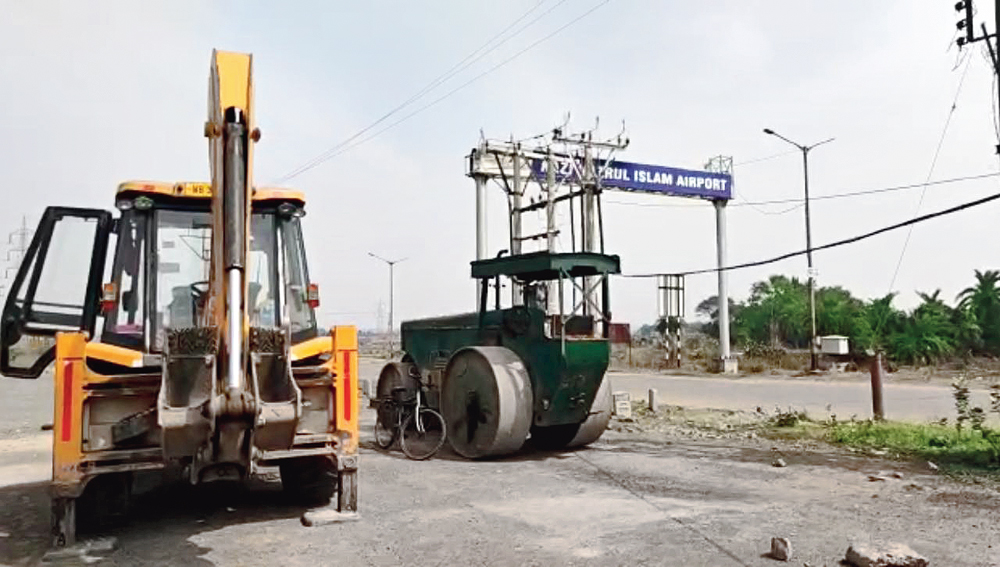 An excavator and a road roller brought for the repair of the approach road to the airport
Picture by Swapna Barua
Abhijeet Chatterjee   |   Durgapur   |   Published 20.02.20, 10:42 PM

Execution of chief minister Mamata Banerjee’s order to repair the approach road of Kazi Nazrul Islam Greenfield Airport at Andal ran into trouble when members of a syndicate forced the contractor to halt work for almost 10 hours on Thursday.

During her West Burdwan district review meeting here on February 14, Mamata had asked the public works department to repair the road soon.

“The condition of the road connecting the airport is very bad. I’m instructing the PWD to repair it soon,” she had said at the meeting.

Within a week of the order, the PWD took up the task of repairing the 4.1km road that connects NH2 with the airport. Sources said Mamata had received several complaints about the bad condition of the road that is used by airport-bound vehicles. The road is maintained by the PWD.

The PWD-appointed contractor went to the site on Thursday with workers for the repair but some local youths stopped them. The contractor had brought in stone chips and other road construction materials on trucks around 6am that had angered the youths.

“The youths told us that we would have to take construction materials from them or else, they would not allow us to work,” said an employee of the contractor.

The contractor told the youths that they were carrying out the repair on orders from the PWD. The youths, however, refused to listen. “They told us that they were supporters of Trinamul and construction materials had to be taken from them,” he said.

The contractor took up the matter with PWD higher-ups who sought Durgapur sub-divisional officer’s assistance.

SDO Anirban Koley said he had instructed the local BDO to hold a meeting between the contractor and the youths to resolve the problem.

Koley later said the matter was solved and work began around 4pm.

“We have told the youths that such hindrances will not be tolerated. The problem has been resolved,” the SDO said.

A youth, who was part of the blockade, said: “We had supplied materials when the road had been built seven years ago. We always supply materials to any project here and it is the practice in the area.”