In the Sunderbans, fishermen are often forced to fish in unlawful territory 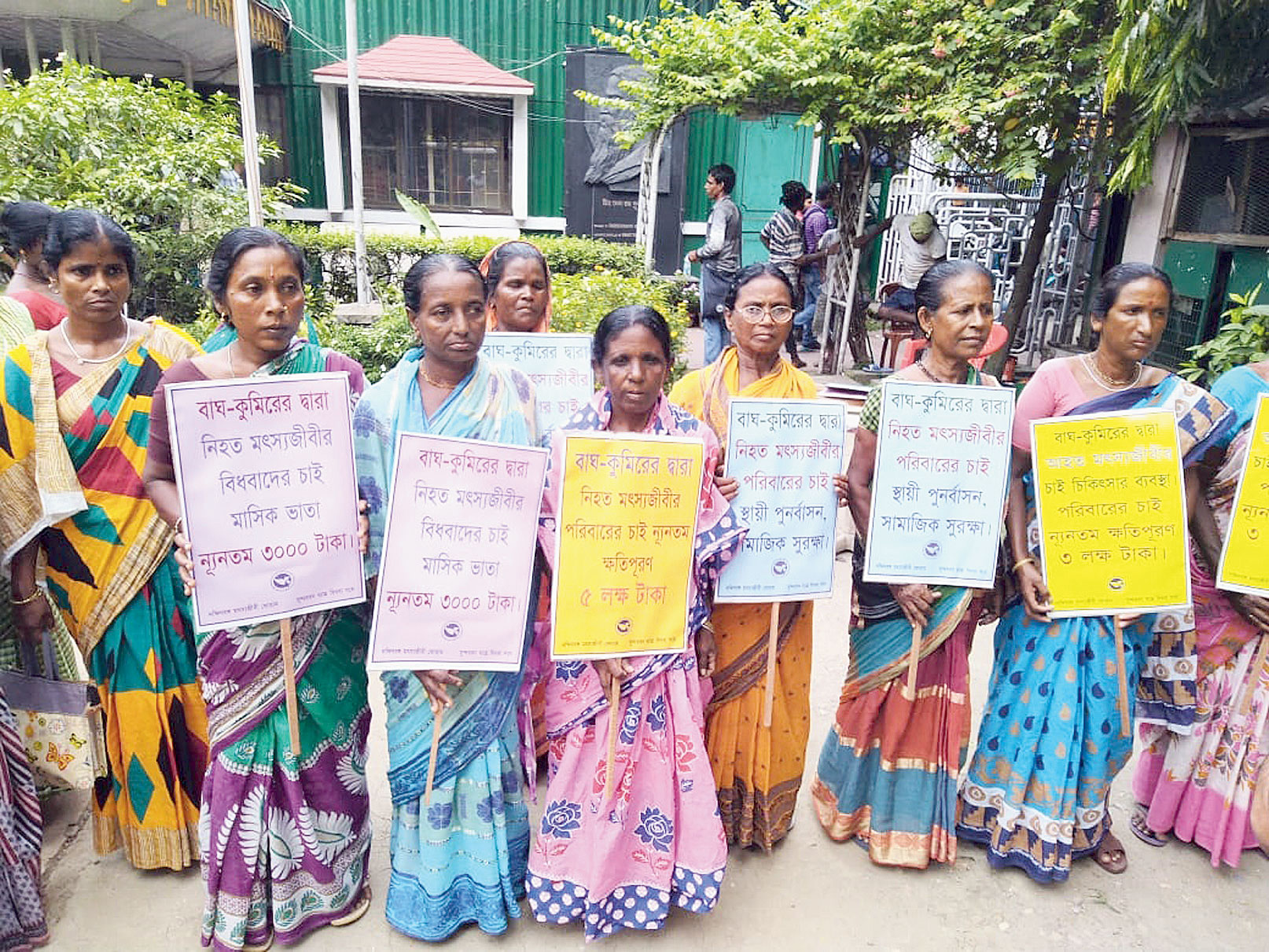 If a fisherman in the Sunderbans is killed by a tiger, the family not only has to deal with his death but faces intense harassment from the authorities, in case he was fishing in unlawful territory.

In the Sunderbans, fishermen are often forced to do so.

“But when a death occurs, government officials, instead of helping us, want to lodge a case against us,” said Gita Mirdha from Lahiripur in Gosaba, who had lost her husband in a tiger attack.

She was one of the 20 women from various places in the Sunderbans who were in the city on Thursday at Press Club, when the NGO ActionAid launched a small study on single women from economically backward sections in Bengal. The “tiger widows”, as they are labelled, spoke about the severe hardships they and their families were subjected to and the utter neglect they received from the authorities.

Any talk of compensation will not be tolerated because the dead fisherman could be in unlawful territory.

The women spoke forcefully about their loss of dignity, when they were interacting with officials. “Ora galigalaj kore (They abuse us verbally),” said Mirdha.

Kaushalya Mandal, from Dayapur in Gosaba, who lost her husband to a tiger attack as well, also spoke about the loss of dignity and the harassment that follows such a death.

Accompanying the women was Milan Das of Dakhin Banga Matsyajibi Forum (South Bengal Fishermen’s Forum). He said the number of tiger attacks was on the rise in the Sunderbans, and those dependent on forest resources for their livelihood, such as fishermen and honey-collectors, were more vulnerable than ever.

Though no official record is available, researchers working on tiger attacks feel there have been about 3,000 such deaths since the 1980s. The number has risen steadily in the last few years.

The declining number of fish and the market demand push fishermen deeper into the forested parts.

“It is a fact that the fish catch has been gradually declining over the last few years, forcing the fishermen into waters close to forest areas, particularly within narrow creeks adjacent to wild islands, thus increasing their risk to tiger attacks,” said Das.

Several deaths have occurred of late near the Gosaba block, adjacent to the tiger territory.

While the animals are protected under the Wildlife Protection Act, the Sunderban area does not come under the Forests Rights Act, which would allow them access to forest resources, pointed out environmental activist Naba Dutta. This conflict of law forces men into prohibited territory. Both man and animals need protection; but can one be at the expense of another?

The women who have lost their husbands said they wanted to form an organisation to make their demands heard. “We do not want any ‘core/buffer’ differentiation (lawful/unlawful territory for fishing). And we want Rs 3,000 to Rs 4,000 from the government to help us,” said Mirdha. “If required we will go on a hunger strike.”

Climate change impact and market demand have been combining to push up man-tiger conflict in the Sunderbans.

Climate scientist and Sunderbans expert Sugata Hazra linked the decline in fish to climate change. “Due to impact of climate change, particularly sea surface temperature rise, the salinity of the Sunderbans water is steadily increasing. This further enhanced because of recession of fresh water flow from upstream. Fish are generally sensitive to such micro-environmental change,” said Hazra, who teaches at the oceanographic department of Jadavpur University.

“The surge in crab demand in the Sunderbans is also responsible,” added Hazra. Crab catchers often go very close to the forest, in the adjacent mud flat or low level water, to catch crabs.

Das agreed that crab demand is on the rise.”This year one quintal crab was sold even at Rs 1 lakh.”