Stories of the ubiquitous but the invisible, stories of folks that nobody much cares about 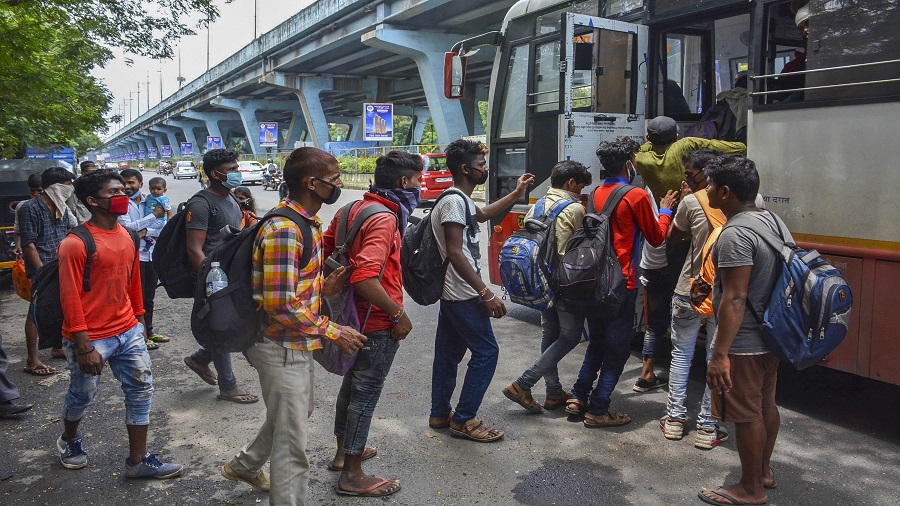 Samtali Chaudhuri takes a few seconds to recall the name of her elder son. “Sambhu,” prompts someone, as Samtali looks this way and that absentmindedly. It is not easy to have a conversation with her, not because she is uncooperative, but because of her general air of resignation. Her standard response to any question seems to be: “How would I know?”

We are in Malda’s Shukurullapur. Three hundred years ago, one Shukurulla Sheikh had arrived in this part of Bengal from Motihari in Bihar, purportedly in search of new fishing opportunities. More people from the Bind community followed Sheikh to Malda and there they remained and their successive generations too. Samtali speaks in Bengali, but her accent betrays the olden tether.

Sambhu, her eldest son, was a migrant labourer. The mother cannot say for sure where exactly her son took up a job. “Perhaps Delhi. Or was it Haryana? Some place that side,” she says. It turns out Sambhu had tagged along with some relations. Those same relations later informed Samtali about his death. “They told me he was returning home from work. He had gone to the marketplace with a little boy and then they said he was no more,” Samtali continues.

Was Sambhu’s body sent home? Samtali shakes her head. “No.” Did the family receive any compensation from the employers? “No,” she says, this time forcefully. “Who would have brought the body home from that distant land? Who would have paid? We didn’t even get to know if he fell off a building or someone did away with him. The thikadar (middleman) here said, ‘Your son is no more’.”

Samtali and I are sitting in the open and talking, just behind us is a bamboo contraption, some teenage boys are sitting on it, hanging around it, chatting. I am told they are home from their different job stations in other states. Sambhu had gone away when he was that age. News of his death came five years ago. Soon after that Samtali’s younger son also left, in search of a living.

In North Dinajpur’s Mandipara neighbourhood, they thrust before me a rain-drenched photocopy of a voter ID card. It belongs to a Gandu Soren. In 2005, he was 45 years old. Soren had left home in search of work. He has been missing for the past three-and-a-half years.

His wife believes he is alive. She has been told so. Where did your husband go, I ask. She replies, “The thikadar from Pratappur told me, ‘Your husband has gone away in search of work’. Where to, he didn’t tell me.”

Soren’s three children crowd around me. What I gather from their loud lamentations and constant questions is that their father went missing before he could reach wherever it was that he was headed for. There was no point pinning blame on the local thikadar as he was responsible for the daily wagers only up to Malda; thereafter, they had been handed over to another thikadar.

Soren had disappeared into thin air and what was left with his family was a voter ID card wrapped carefully in plastic and a worn-out photocopy.

Shaji Mohammed’s house is at the other end of Raiganj, barely three kilometres away from the Indo-Bangladesh border. The sons and daughters of this household start work as daily wagers in distant lands from early childhood. One son left years ago and never returned; the others have. The daughter was barely eight when she was sent away to Punjab where she works as a household help. Shaji Mohammed too had gone away to Mumbai; when he returned, he had a kidney missing.

According to Shaji’s wife, her husband fell ill after someone fed him something. The thikadar had him admitted to the hospital. He was told he needed to get a blood test. Fast forward many weeks. Shaji was back home and keeping poor health. When he went to see the local doctor, he prescribed an ultrasonogram and that was how he came to know that he was missing a kidney. He was missing his full wages as well — had been paid only Rs 20,000 of the promised Rs 1,40,000 by the thikadar. That was 15 years ago.

At the time of my visit, Shaji was not there to tell his story. He was away in Delhi, where he was employed at a construction site. After all, a kidney is not like a missing hand or leg; it does not come in the way of mixing cement and hauling bricks, neither is it needed to scale heights.

A 50-something Rabindranath Debsharma sips tea as he tells me his story. His refrain is, “They died, but I managed to survive.”

Debsharma had left his home in South Dinajpur when he was 18 and travelled to Haryana to work as a stone crusher at “kresher” mill. A crusher is one where stone is crushed and mixed with cement to make concrete. A lot of men and boys from these parts worked in the mill those days. Debsharma and all of the others knew it was a risky job, crushing stones; led to a premature and painful death by haemorrhaging — a natural corollary of tuberculosis.

The bodies of labourers were always disposed of. Others returned home to die. Like an incantation, Debsharma names his dead mates — Jayanta, Rupa, Shankar, Sukumar... Rajbangshis all. All of them died within three or four years of starting work at the mill.

The men of house No. 2 of Satjeliya Island in the Sunderbans spent long years working in the Andamans and neighbouring islands. A lot of them were there when the tsunami struck in 2004. Nicobar, Diglipur, Kamota, all these places had been decimated by the tsunami. Homes, offices, courthouses, everything had been wiped out; everything would have to be rebuilt. Those days, thikadars would scour the Sunderbans for cheap labour.  According to Paritosh Sardar, there was also a need for labour to clear the piles of dead bodies. The labourers bargained with the thikadars to let them return home at the end of two months, but way before that they started to die like flies, of infection brought on by the contaminated water and rotting bodies all around.

Urun Murmu, 52, has only half a left arm; the forearm is missing. He lives in Kanot in Malda district. We are standing at a spot with bamboo groves behind us. The bamboo branches sway in the wind and Urun too swings his half arm as he narrates his experience as a “tower worker”.

Urun lays out high tension voltage cables. He tells me about the time he was on the job in some place near the Sone river, close to Allahabad. He was in his early 20s those days.

He and a whole gaggle of men from Malda had left home to make a living while they were still in their late teens. As the high-tension wires zig-zagged through Haryana, Lucknow, Benares, Urun journeyed with them.

Urun describes his work through a patchwork of phrases — “transmission lines”, “11,000 volts”, “shut-down work”. He explains that whenever he and the other men would climb the electric towers, someone on the ground would shut off the electric supply.

The handle of the transmitter had to be pul-led down and then it had to be locked till the work was over.

If one kept to the rules there was no problem. But that particular project had been contentious from the start. The people of the village, where the tower was being installed, had been promised a payout by the power company. Urun was on the job, which was supposed to last three days. The first two days remained uneventful. The third day brought with it unrest. The villagers hadn’t received any payment from the company and were fuming.

Urun climbed the tower. The power company man hollered from below, “Shutdown ho gaya. Ab pilot pass kar lo.” Urun kept climbing the tower, the wire coiled around the palm of his left hand and covering a fair portion of his arm right up to the elbow. Urun refers to the man from the company as “saheb”. He tells me, “Saheb made a mistake that day. He forgot to lock the transmitter when he left his station to buy a packet of gutka.” Urun’s voice holds no rancour, no bitterness.

Angry villagers went to the unattended transmitter and pushed the handle up for two to three minutes and then brought it down again. In their eyes Urun too was part of the power company that had cheated them of their payout. The live current pierced the fingers of Urun’s left hand, travelled down the arm making his whole body tremble. He fell from the tower and on to the sandy bank of River Sone. When help arrived, he was still unconscious. He was unconscious when he was packed into a boat which carried him to Benares. After the seven-hour ride, when they finally reached the hospital, the arm had turned septic.

Urun still works with power companies, journeys to other states. He has learnt to do the job with his one-and-a-half hands.

On March 28, 2020, the sight of thousands and thousands of labourers at Delhi’s Anand Vihar Bus Terminal catapulted an otherwise invisible people to the middle of public consciousness. It elicited sustained media coverage, government announcements and public outrage. Truth is, when lockdown is over and corona can be conquered with a shot in the arm, even then the march of the migrants will continue. There will be new stories of disappearance and silence, painful deaths and missing organs. But most likely they would have ceased to make headlines then.

Saha is the author of the Bengali books Borderey Meyera (2017) and Chhotoder Border (2018), on the lives of women and children of Bengal’s borderlands. She is currently working on a book on migrant labourers titled Labour Train

Invisible people and their stories

Grief for all times