Grief for all times

A German artist, an Indian mother, and how life imitates art 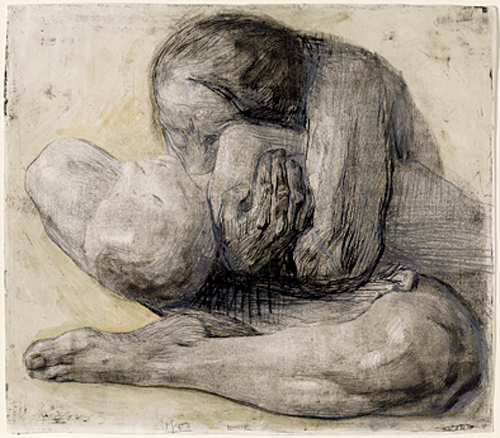 The analogy may sound bizarre, far-fetched and improbable but, ever since the spectre of the novel coronavirus has shrouded the world with its long, dark shadow, whenever I see words creeping out simultaneously like ants from different WhatsApp display pictures of netizens living in varied time zones and locations thousands of miles apart, somehow I think of the great German Expressionist artist, Käthe Kollwitz (1867-1945). Her monochromatic graphic works were like a silent howl of despair of the agonized masses anywhere caught in a cataclysmic situation where death is the only dénouement. Like never before, fear of an invisible and insidious enemy has brought together the entire world and its people. And like many great artists, Kollwitz seems to have been prescient enough to depict the nightmare we are living through and the untold sufferings of toiling humanity through works of such power and stark beauty that they can shake us out of our complacence even in ordinary times.

Kollwitz had lived in traumatic times that witnessed great social upheavals, ills of industrialization, degrading poverty of the working classes and the two great wars. She realized that women suffered most during these times as they protected and mourned the loss of their children to violence, wars, hunger and scourges. Death was a theme that stayed with her throughout her career as a printmaker; as she noted in her diary: “I must do the prints on Death. Must, must, must!”

And death is so central to our experiences that Kollwitz’s graphics reach out across time and space. She had lost her son in World War I, and while Woman with Dead Child  is modelled on the Pietà, where Virgin Mary holds the mortal remains of her son, Jesus, Kollwitz makes no attempt at aestheticizing the image of the woman, stripped of her clothing, clutching on to the corpse of her child with the desperation of an animal that has lost its offspring. The primal quality and despondence of her agony is such that she has dropped her human veneer and has turned into an icon of abject suffering, almost animal-like in the ferocity of her torment. We are not surprised when we learn that Kollwitz had used herself and her seven-year-old son as models for this image.

And when I looked at the images on television of the young, keening mother of Jehanabad in Bihar cradling the lifeless, tiny body of her child as she went mad looking for an ambulance for her severely ill son when several vehicles were lying idle, I realized how life, on occasion, seems to imitate art. Kollwitz had come close to unlocking the mysteries of our existence and human suffering through her timeless art.

While being trained as an artist in Munich, Kollwitz realized that not painting, but graphic art was her forte and she was trained as a draughtswoman. In Berlin, where she encountered the working class patients of her husband, a physician, she realized that she was moved more by the “beauty” of the proletariat than by compassion for them, although without humanness Kollwitz’s images of suffering would have been unable to move us as strongly as they do even now.

As we see electronic images of the misery of thousands of migrant workers caught unawares by the lockdown, trudging back home to distant villages, we realize that Käthe Kollwitz’s depiction of hopelessness and grief is for all times.