Steps to avert accidents on Eastern Bypass in Siliguri

Last week, a truck carrying boulders had lost control and rammed into shops along the bypass at Jaleswari 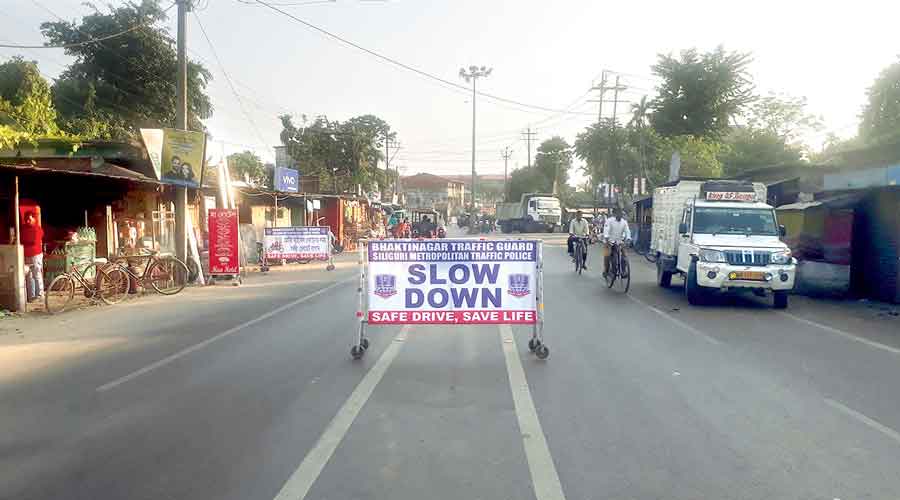 Authorities have taken a number of initiatives like removal of illegal shanties and installation of reflectors and direction boards to avert accidents on the Eastern Bypass in Siliguri.

The steps were prompted by an accident that claimed four lives at Jaleswari last week.

The 9km-long Eastern Bypass connects northern and southern ends of Siliguri. It is one of the arterial routes used by vehicles moving towards the New Jalpaiguri station from the Darjeeling hills and from Salugara and other areas in the northeast of Siliguri.

Last week, a truck carrying boulders had lost control and rammed into shops along the bypass at Jaleswari. Four persons were killed in the accident.

After the accident, the traffic wing of Siliguri Metropolitan Police cleared illegal stalls and shanties which had come up on either side of the bypass.

“Illegal structures were removed from both sides of the bypass in areas like Kankata More, Naresh More and Jaleshwari. Our men are constantly keeping vigil along the entire stretch of the bypass to prevent any encroachment,” said a police officer.

Besides, traffic police have been deployed at important intersections.

“The display boards also mention parking and speed restrictions. The vehicles should maintain a speed of 40km per hour on crowded stretches. Boards have been put up along the bypass to help the drivers with directions. We will also deploy more men at the intersections for smooth and safe movement of traffic and people,” the officer said.

After the accident, chief minister Mamata Banerjee had expressed concern over the movement of vehicles along the bypass and passed specific instructions to launch the “safe drive, save life” campaign of the state government in the route.

She had also called up Gautam Deb, chairperson of the board of administrators at the Siliguri Municipal Corporation, to monitor the initiatives which would be taken by the police and agencies like the Siliguri Jalpaiguri Development Authority, on the bypass.

“I will soon hold a meeting with the police and administration of Darjeeling and Jalpaiguri on the Eastern Bypass issue. The police have already taken certain initiatives and some more plans would be drawn to ensure that road safety is maintained throughout the bypass,” said Deb.

The accident had also made locals point out the lack of street lights in most stretches of the bypass. This has made the SJDA – the agency that had built the road years back – to plan installation of lights in the road.

“We have inspected the road along with engineers. We are waiting for their reports and would then take the initiative to install lights across Eastern Bypass so that the road remains properly lit,” said Sourav Chakraborty, the SJDA chairman.