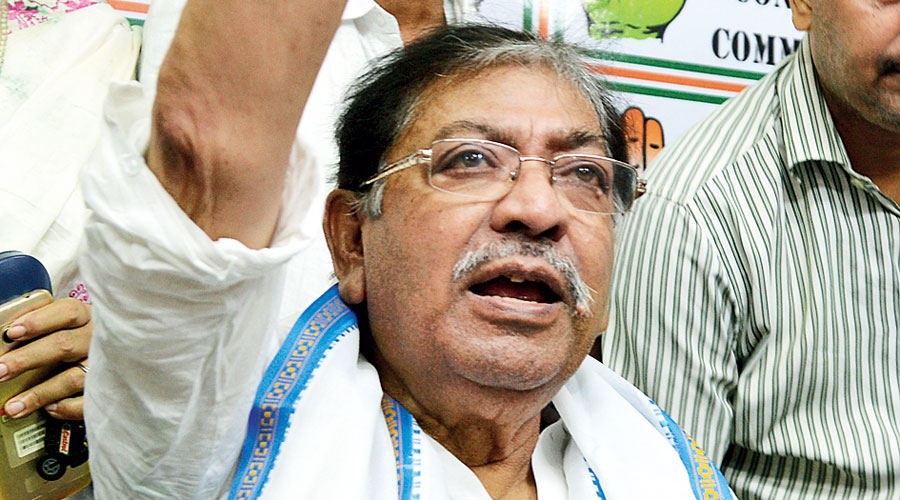 Bengal Congress president Somen Mitra, or Chhorda (youngest elder brother), as he was fondly called by his followers, breathed his last at a Calcutta hospital on Thursday early morning, leaving the beleaguered state unit of the party rudderless months before the Assembly elections.

The 78-year-old was undergoing treatment for ailments related to heart and kidney.

Mitra was among the last of the old guard from a state that produced countless stalwarts in the party’s 134-year history. He is the first chief of the historic Bengal unit to die in office.

In his chequered political career spanning six decades — he began as a student leader in 1967, Mitra has been known as a master craftsman who could make friends with ease.

One of his failures, however, had been to prevent a split in the party by Mamata Banerjee. Differences with Mitra was one of the major reasons for Mamata leaving the Congress and launching Trinamul.

Mitra is survived by his wife Shikha, a former Trinamul Congress MLA from Sealdah and Chowringhee, and son, Rohan.

Several senior Trinamul leaders, all once colleagues of Mitra in the Congress, were seen with his cortege at various points of his final journey.

Sources in the state unit have said unless the high-command surprises everybody with an unexpected selection, Rajya Sabha member Pradip Bhattacharya is a frontrunner for the post of the Bengal Congress president. He had held the post previously.

Born on December 31, 1941, in what is now Bangladesh’s Jessore district, Mitra cut his teeth in politics as a student leader in the turbulent 1960s and rose through the ranks quickly along with Congress stalwart Priya Ranjan Dasmunsi.

At the age of 31, Mitra — backed by the iconic Congress leader A.B.A. Ghani Khan Chowdhury — became a member of the Assembly from Sealdah (which no longer exists) in 1972.

He left the Congress in 2008 to form his own Pragatisheel Indira Congress and surprised everybody by merging it with Trinamul the following year.

However, he rejoined the Congress in 2014.