The fishes, valued at Rs 4.25 lakh that were being smuggled into India from Bangladesh through a riverine border in Murshidabad district 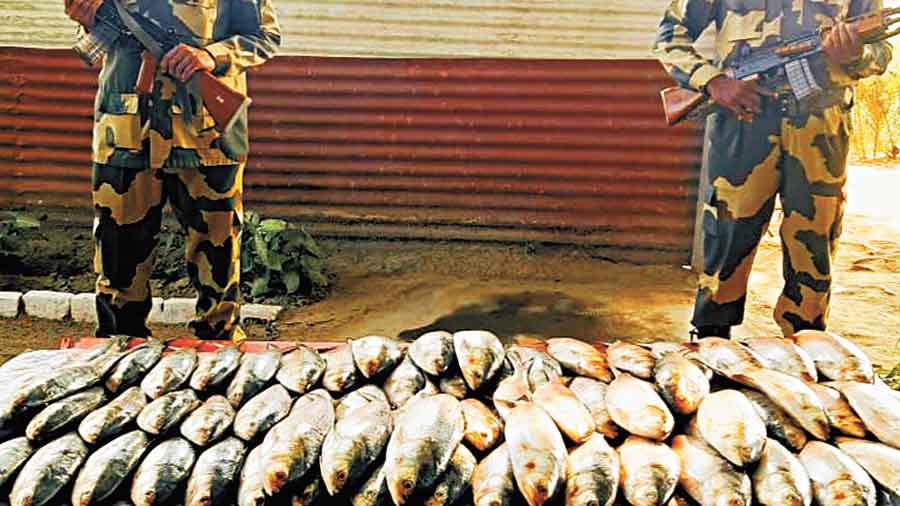 Some of the hilsa seized by the BSF in Murshidabad district on Friday evening
Telegraph picture
Subhasish Chaudhuri   |   Calcutta   |   Published 15.08.21, 02:04 AM

Border Security Force personnel on Friday evening seized over 250 kilos of hilsa valued at Rs 4.25 lakh that were being smuggled into India from Bangladesh through a riverine border in Murshidabad district.

The BSF sources in Calcutta said a patrolling team of the 141 Battalion attached to Dayarampur outpost in Murshidabad intercepted six small boats with 257kg of hilsa packed in bags brought through the Padma river.

A BSF officer said: “Initially, it appeared some villagers were fishing. But since their body language appeared suspicious, we challenged them near the river bank. They fled leaving the six boats. The team seized 257 kilos of mature hilsa from the boats.”

The consignment was handed over to Customs, officiating commanding officer of the 141 Battalion Arvind Kumar said.

A major drop in the catch of the prized fish has been seen for the second consecutive year in Bengal, apparently owing to the rising level of the riverbed because of silt that has shrunk breeding space, trapping of juvenile fish and excessive harvesting through “bottom trawling” or scooping hilsa from the bottom of the sea with nets.

Fishermen, who ventured to catch hilsa from Namkhana-Kakdwip fishing harbour, said the gross catch this year has been 25 per cent of the projected catch till August. This shortfall has created a huge demand for the hilsa. BSF officials said smugglers were trying to cash in on the demand by smuggling the hilsa from Bangladesh.

Last year, the BSF had thwarted smuggling of the hilsa from around Bangladesh and seized about 800 kilos of the prized fish.