Under the banner of the Uttarbanga Safai Karmachari Samiti, they have raised a number of demands, which include permanency of their jobs and hike in wages 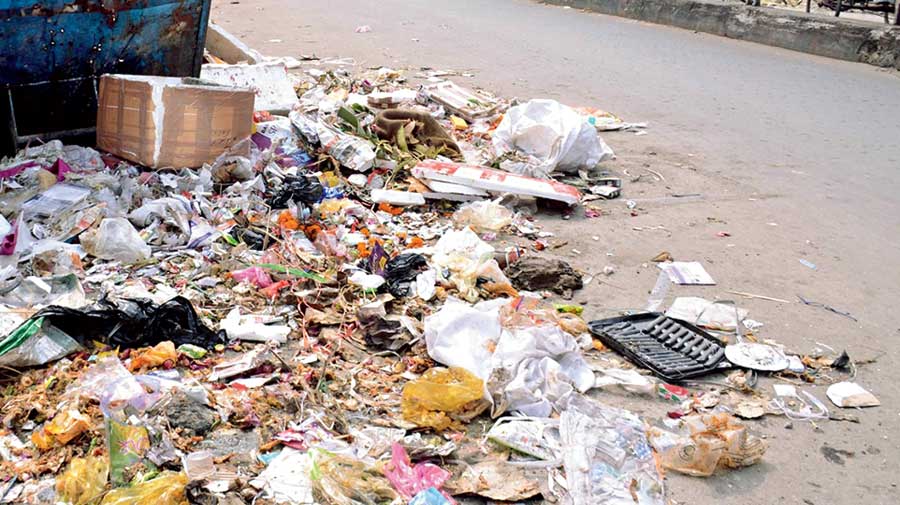 The ceasework by conservancy workers of the Siliguri Municipal Corporation continued for the third day on Friday, which worsened the situation across the city as more and more garbage piled up in different corners.

Since Wednesday, over 2,500 workers of the civic body have been on strike. Under the banner of the Uttarbanga Safai Karmachari Samiti, they have raised a number of demands, which include permanency of their jobs and hike in wages.

On Thursday, they had a meeting with Asok Bhattacharya, the chairperson of the board of administrators at the SMC.

But no decision was made at that meeting. State tourism minister Gautam Deb had called them for talks on Friday but none of the workers turned up at the meeting.

“He is the tourism minister and we believe that he can only forward our demand to the state municipal affairs department. That is why we did not join the meeting and sent a letter to the minister (Firhad Hakim) concerned instead for his intervention,” said Rauth.

Altogether 2,571 workers provide conservancy services in the SMC area. Among them, 371 are permanent employees while the remaining workers serve on daily basis.

The permanent employees have also joined the ceasework, which has led to complete collapse in the waste collection and disposal system in all 47 wards of the city.

In fact, an effort by the civic authorities to engage new workers for clearing the garbage has also faced resistance from the agitators at a number of places. They have also stopped SMC vehicles from carrying away the garbage.

The SMC authorities as well as the subdivisional administration held emergency meetings to discuss the situation.

“Specific complaints will be lodged against the workers who have damaged some vehicles of SMC and have threatened some of our workers as they joined their duties. Also, if the permanent workers do not join their duties from Saturday, we will mention that there has been a discontinuation of service in their service books,” said Asok Bhattacharya, who is also the Siliguri MLA.

He also mentioned that on Saturday, a meeting with civic employees’ and workers’ unions affiliated to Citu, Intuc and Inttuc would be held in SMC.

“We are trying to end the stalemate and have also sent a letter to the agitating workers, asking them to withdraw the movement and resume their services,” added Bhattacharya.
Meanwhile, the sub-divisional administration of Siliguri held a meeting in the Mainak Tourist Lodge complex here on Friday. State tourism minister Gautam Deb was present at the meeting.

After the meeting, Deb said that they have sympathy with the conservancy workers but their cease work can lead to serious consequences as the Covid 19 pandemic is not over.

“If required, along with all the ward coordinators irrespective of their political affiliation, will come out and initiate a cleanliness drive in the city,” the minister said.