Advertisement
Home / West-bengal / Show your degree and ask for job

Show your degree and ask for job 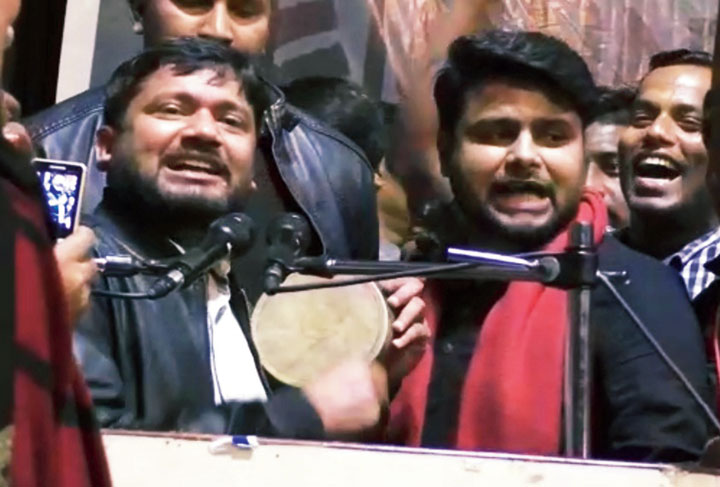 CPI leader Kanhaiya Kumar has an advice for youths should enumerators of the National Population Register come knocking — show your educational certificates and ask them if they can give you jobs.

“Aap sirf aapki degree dikhayein. Iske baad puchhiye ke sahaab naukri kahaan hai? (You only show your degrees to them. Then ask, sir, where is the job?),” said Kanhaiya, a former president of the Jawaharlal Nehru University’s students’ union.

Launching a frontal attack on the Narendra Modi government, he said when a government refused to accept its own citizens, the people should stop treating it as the one elected by them.

The government, he said, has crafted the new citizenship matrix only to hide the fact that there are no jobs in the country.

“People of this country are going abroad to work as they cannot survive here. But the government is busy framing laws with the motive to divide the citizens on the basis of religion,” Kanhaiya said.

He described the Citizenship (Amendment) Act as a ploy to steal the fundamental rights of citizens.

“The NRC exercise in Assam had cost Rs 1,600 crore and it will take another Rs 60,000 crore to cover the entire country,” he said.

“There is a massive economic slowdown. There are no jobs and the government wants to spend this much money on a futile, divisive exercise that will not be beneficial for the nation in any way.”

A similar drive to issue Aadhaar cards, too, had been an exercise in futility. The government had promised that only one card (Aadhaar) would be enough but we still have so many cards, he said.

Similarly, the government had promised that demonetisation would wipe out terrorists but “now policemen are seen escorting terrorists to Delhi”.

“This makes it clear that it (demonetisation) had no effect whatsoever on those who spread terror,” he said.

Later, at a public convention in Barrackpore, Kanhaiya gave the call for “non-cooperation” with the Centre and urged the people to replicate the Shaheen Bagh protest everywhere till the Modi government withdrew the “divisive” CAA, NPR and NRC.

“If possible, our government will make another Jallianwala Bagh at Shaheen Bagh... when they failed to fire bullets, they started bullying digitally… now they are digitally lynching protesters.”

He called for greater use of the digital space by youths against the divisive policies of the Centre and added that “only refusal to show papers will not work, we have to reach every home to unite the voice of protest”.

Kanhaiya accused Prime Minister Narendra Modi and Union home minister Amit Shah of “trying to divide our country on religious lines for the sake of votes”. The Modi government, he said, was engaged in deflecting the attention of the people from burning national issues through projects like the CAA and the NRC. People of India now want independence from them, he said.

“While our country’s economy is sinking… the BJP leaders have been preaching us fake nationalism. They know well that the people of the country has realised their ploy and have came out on the streets,” Kanhaiya said.

He said the BJP was going slow ever since the NRC project in Assam suffered a setback with 12 lakh Hindus failing to make it to the citizenship list. “So, to confuse people it has introduced the CAA, which will not help at all, rather divide us on religious lines,” Kanhaiya said.

Hours before the convention began, police arrested eight BJP activists in Titagarh for allegedly putting up “malicious” posters against Kanhaiya. BJP supporters blocked the Barrackpore road for an hour in protest.