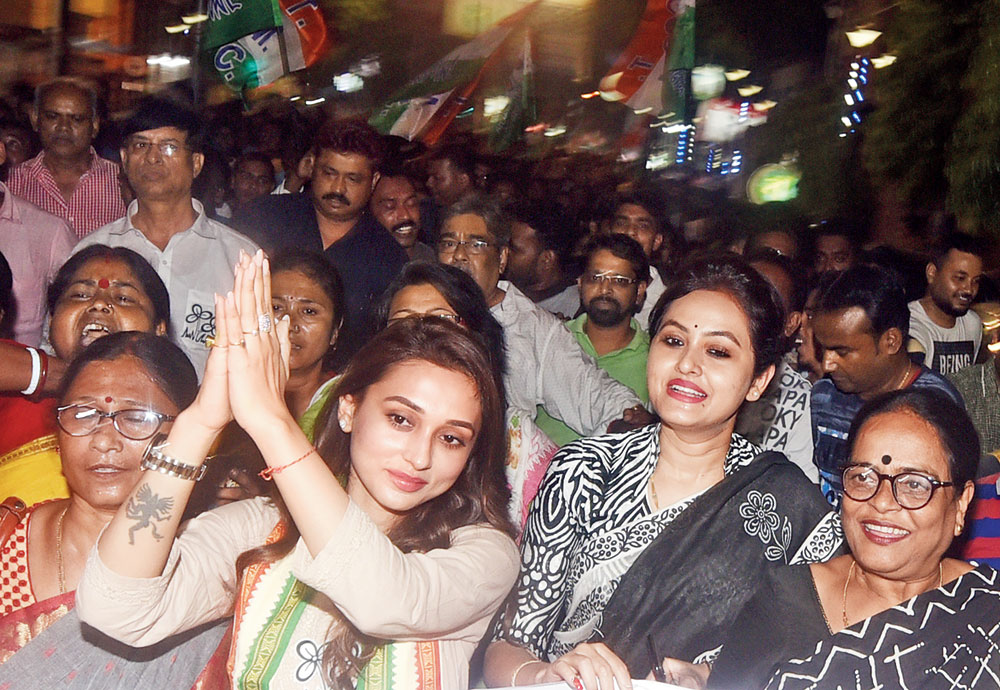 Actress Mimi Chakraborty on the first day of her election campaign in Jadavpur on Tuesday
A Telegraph picture
Arindam Chatterjee   |   Calcutta   |   Published 15.03.19, 11:47 PM

Tollywood actress Mimi Chakraborty, who will contest from Jadavpur as a Trinamul Congress candidate in the Lok Sabha elections, has “stepped down” from Birsa Dasgupta’s film Bibaho Obhijaan, whose shoot begins soon.

Speculations on her availability for the film had been ripe since chief minister Mamata Banerjee announced Mimi’s name as a Trinamul candidate on Tuesday.

The actress put all speculations to rest with a tweet on Friday morning.

“Recently it was announced that I would be a part of SVF’s next film, Bibaho Obhijaan, directed by Birsa Dasgupta. Since the announcement of my candidature this week for upcoming elections, I have, in due interest of the film and production team, decided to step down from the role. I feel it was necessary to honour my immediate commitments without disrupting the film production schedule. I wish the entire team of Bibaho Obhijaan much luck and success!” Mimi tweeted.

The tweet led to more speculations — on who will replace Mimi and what will happen to the film.

“We respect Mimi’s decision. She has always been an integral part of SVF and will always be,” said a spokesperson for the company.

Bibaho Obhijaan is a comedy that follows two friends — Anupam Banerjee (Ankush) and Rajat Das (Rudranil Ghosh) — who study together and live in the same locality.

Anupam is a shy youth who avoids all female gaze but falls head over heels in love with a woman named Rai (the role that was to be played by Mimi) after hearing her inspiring speech at a cultural event.

Much against the wishes of his family, Anupam decides to marry Rai and move in with her.

Mimi started her acting career with the serial Champion in 2008 and rose to fame as Pupe from the mega-serial Gaaner Oparey in 2010. The serial’s success and the appeal of her character helped Mimi launch her film career.

Among the films she acted in are Proloy, set in the interiors of Purulia, Shudhu Tomari Jonyo and Gangster.

Mon Jaane Na, in which she stars, releases on Holi.

On being asked how she would balance work and political commitments, Mimi had said on Tuesday that she was good at multitasking.