The structure near Hariharpara caved in around 3.30pm 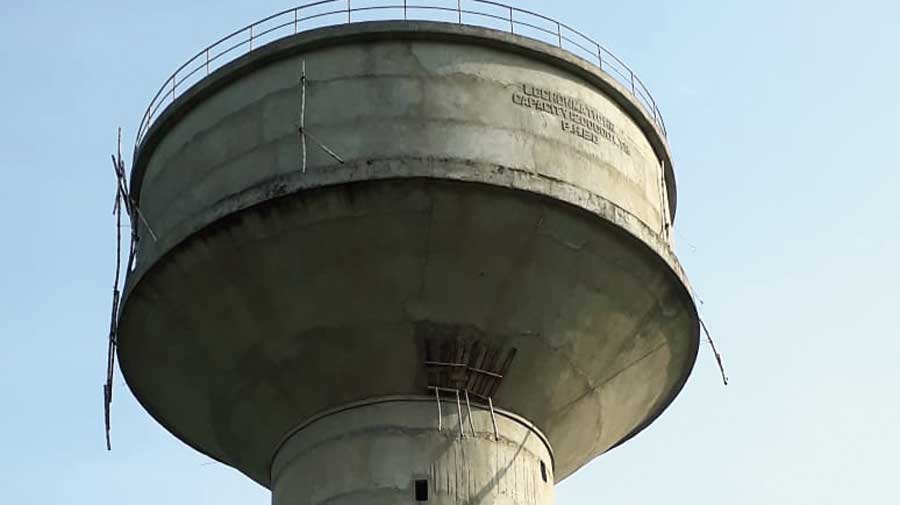 The administration’s wish of fresh water supply as a “New Year’s gift” for a village in Murshidabad district came crashing down when a new overhead reservoir with a capacity of 12 lakh litres collapsed on Friday afternoon, minutes after its pump had been switched on for the first time.

The structure near Hariharpara caved in around 3.30pm.

Sources said the tank had started leaking and collapsed before even 25 per cent of the capacity had been filled. Work on the project, an initiative of the public health and engineering department, had started in 2018.

“I switched on the pump and started walking home. Within minutes, I looked back and witnessed the horrendous sight of the tank crumbling,” said operator Abdus Selim Mondal, who owned the land that was let out for the project.

“We were all eager for the operation of this new reservoir because we had been promised fresh water as a New Year’s gift from the district administration,” the Imamnagar resident added.

There were no casualties in the incident.

Sources said the Hariharpara block development officer Raja Bhowmick and police had visited the site on Friday evening. Public health engineers from Behrampore were on their way to the spot.

“I informed police right away and rushed to the site. We are awaiting the arrival of engineers to know the exact cause of the crash,” said the BDO. He declined further comment citing “technicalities” associated with the incident.

Executive engineer of the Behrampore public health and engineering department, Asit Roy, said: “We will launch an inquiry and await official results before going into conclusions about the incident.”

On January 22 last year, an overhead reservoir with a capacity to store 700 cubic meters of water had crashed in Bankura’s Sarenga, raising questions over the structure that had been completed at a cost of Rs 165 crore just three years before. Engineers of the state government had cited the design fault as the cause of the collapse.

The tank collapse had resulted in severe water scarcity at 20 villages in Sarenga, which is known as one of the most arid and dry zones in Bengal.