Advertisement
Home / West-bengal / Reel to real: Water for all

Reel to real: Water for all 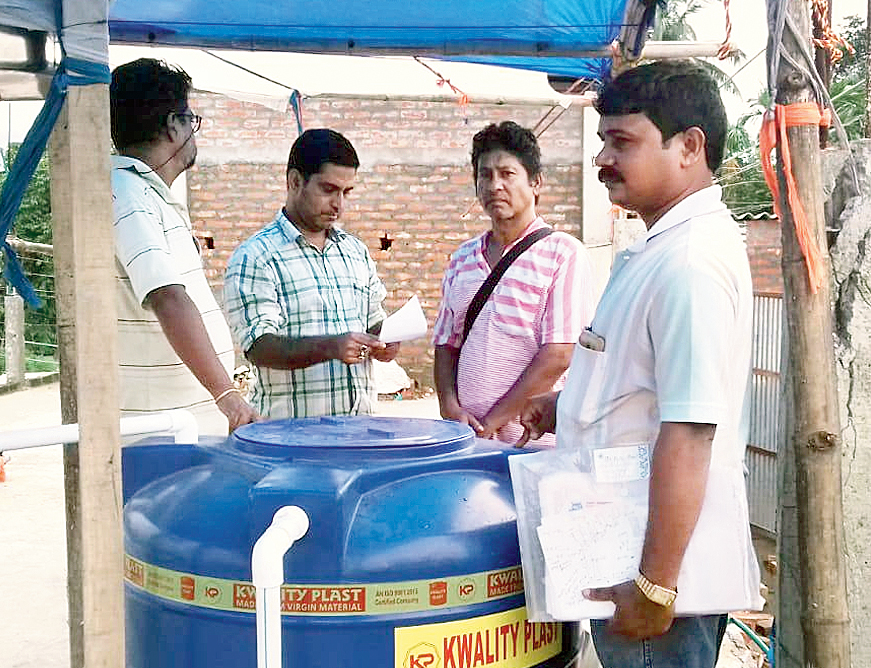 A rainwater harvesting system that was part of a film set has turned into a major source of drinking water for around 2,500 residents of a Cooch Behar village.

Rop Akter Ahamed, a mechanical engineer who works in Mathabhanga municipality, and his friend Mahabul Hossain, a businessman, had set up the apparatus at Sikarpur village for the shoot of their film Ek Phonta Paani (A Drop of Water), which revolves around water scarcity and the need for conservation.

While Rop Akter has directed the film, which is to release on October 18, and also written the script, Mahabul has part-financed the movie and also acted in it.

The two friends did not dismantle the water harvesting apparatus, which filters rainwater for drinking, after the shooting was over as many villagers approached them with the request to collect drinking water.

The only source of drinking water in is a tube-well, and the water has high iron content.

“A resident of our district agreed to finance our film. We roped in some more people from Cooch Behar and also got actors and technicians from Bangladesh,” Rop Akter, a resident of Sitalkuchi in the district, said.

The water-harvesting apparatus that was part of the film set was built by Rop Akter and his team in a vacant area on the compound of Mahabul’s house.

“After we finished the shoot, some villagers asked us whether the rainwater that had been filtered and stored in the tank was really safe for drinking or whether it was just a prop. When we assured them that the water was safe, they began collecting water from the tank and taking it back home,” he said.

More and more people from the village followed suit.

“We won’t dismantle the plant. In fact, we are projecting it as a model and encouraging people to set up similar apparatus so that they have adequate drinking water,” Mahabul said.