The soil beneath more than 60 per cent of Calcutta faces a significant hazard of liquefaction, a process that can put buildings at risk of damage or collapse during earthquakes, a study has found. 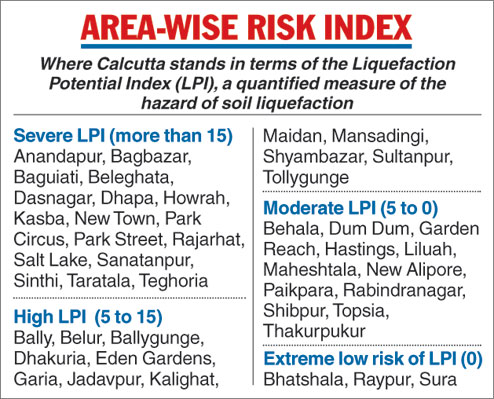 New Delhi: The soil beneath more than 60 per cent of Calcutta faces a significant hazard of liquefaction, a process that can put buildings at risk of damage or collapse during earthquakes, a study has found.

Scientists at IIT Kharagpur, who set out to assess the impact of earthquakes on the city, have classified 34 per cent of its area at high risk and 28 per cent at severe risk of soil liquefaction.

The team combined their research with documented effects of a historical reference event - the 1934 Bihar-Nepal earthquake that measured 8.1 on the Richter scale - and created a hazard map for a 6.7 magnitude earthquake within 300km of the city.

The team's liquefaction hazard map, developed through geotechnical investigations at 654 sites across a 435sq km swathe of Calcutta, is expected to guide construction and building-protection activities.

"Structural engineers may now tailor the foundations of buildings for specific sites, depending on expected soil behaviour there," said Sankar Kumar Nath, professor of geology at IIT Kharagpur, who led the research.

The study, just published in the Journal of Seismology, provides new quantitative estimates not available in the seismic microzonation reports for Calcutta and New Delhi that were released by the Union earth sciences ministry in February 2016.

Microzonation uses local soil information to generate estimates of earthquake-triggered ground movements and provides a more reliable assessment of hazards than available from the existing seismic risk map that merely classifies different parts of India into one of four zones.

Calcutta rests on sediments containing clay, silt, sand, gravel and decomposed wood in the Ganga-Brahmaputra-Meghna delta region, where geologists say earthquakes may cause the soil to behave like water - soil liquefaction - and threaten structures on the ground.

But some structural engineers are worried that construction regulations have yet to take advantage of such hazard maps which, without enforcement by regulatory agencies, could largely remain academic exercises.

Some experts are concerned that even existing building engineering codes are not enforced by civic planners. "Local authorities need to enforce engineering codes, just as they do fire codes," said Sudhir Jain, professor of civil engineering and director of IIT Gandhinagar. "A number of microzonation studies have been taken up in India, but I haven't seen any benefits on construction."