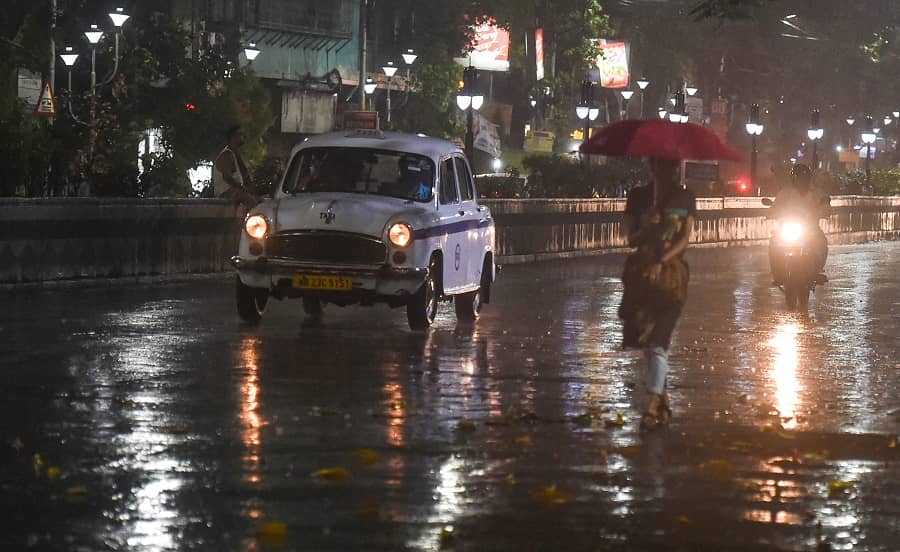 Rain brought relief from sweltering heat in the southern districts of West Bengal on Saturday.

Moderate rains hit Calcutta and its neighbouring Howrah and North 24 Parganas districts and other parts of south Bengal in the evening.

A squall passed over Calcutta from the northwest gusting up to 64 km per hour around 7:20 pm, a weather department spokesperson said.

Thunderstorm accompanied with lightning and rain is likely to continue over some parts of Calcutta, Howrah, Hooghly, Nadia, the North and South 24 Parganas districts for the next few hours, the MeT office said.

A Kolkata Municipal Corporation official said at least five trees were uprooted during the storm in different parts of the city but there was no report of anyone being injured.

There was also no report of water-logging but traffic moved at snail's pace along Chittaranjan Avenue, AJC Bose Road and other major thoroughfares in the city, a traffic police officer said.

Commuters had a harrowing time as there were fewer buses on roads and taxis and app cabs charged higher fares.

"The heat in the last one month has been unbearable. The rain has brought some relief. I don't even mind waiting for transport," Sambuddha Sen, who was waiting for a ride back home in Behala from Rabindra Sadan, said.

Crowds on the Nandan-Rabindra Sadan-Sisir Manch compound for the ongoing Kolkata International Film Festival thinned as rains lashed the city. However, screening of films or panel discussions were not affected.