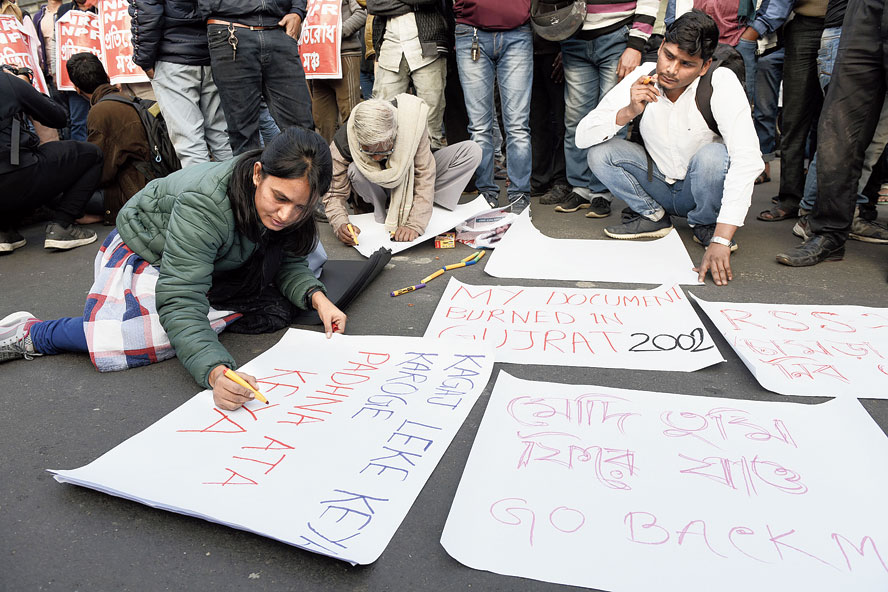 Prime Minister Narendra Modi landed in Calcutta at 3.33pm on Saturday and took a helicopter to reach the heart of the city to escape the hundreds of protesters who had gathered near the airport to prevent his convoy from rolling out.

The protesters included schoolteachers, students, professionals and business owners who had no association with any party but all of whom wanted Modi to know they were opposed to the amended citizenship act and the proposed National Register of Citizens and National Population Register.

Among the protesters was a biology teacher who has started teaching the Preamble to the Constitution in class before starting biology lessons, a farmer from Haroa in North 24-Parganas, a post-doctoral student and a professor.

They all wanted to march to the airport. Instead, they blocked the Ultadanga-bound flank of VIP Road at the Kaikhali crossing after police prevented them from going any closer to the airport.

Modi’s chopper took off from the airport at 3.57pm. As news came that the Prime Minister had chosen to take the air route, the slogans became louder.

“Modi has fled in a helicopter because he knows he cannot make his way through here. We would all go to where Modi will stay for the night. We will not let him sleep in peace tonight,” said a young man who was giving a speech.

Schoolteacher Kazi Ruma Quntum squatted on the road and was writing posters at ease. She had attended the first rally in her life a few days ago — a gathering to protest CAA and NRC.

One of the posters she wrote read: “Three words the government should not worry about — NRC, CAA, NPR”. Below it a tick mark beside the word “GDP” signalled what should be the government’s priority.

Quntum, a high school biology teacher, said she never felt the need to teach students the Preamble to the Constitution, which was printed on the first page of the books.

“I would always turn that page and start from the first chapter. But for the last few months I have been asking students to read the Preamble and also explaining them the words therein and their significance,” said the teacher, who asked her husband to take care of their child at home because she wanted to attend the rally.

Hospitality management student Sayantani Banerjee had come all the way from Lake View in south Calcutta. Sayantani has been an active participant in the No-NRC Movement’s Facebook page. “Since I write against the CAA, NRC and NPR, some people reported my profile and Facebook had blocked it for some time. But nothing can deter me. I will keep protesting,” she said.

Azizuddin, a farmer, had travelled close to two hours to reach the protest venue from his Haroa home. “How could I have sat back today? The man who is leading the attack on our Constitution should not get a welcome here,” he said.

The rallyists, who had organised under the banner of the “No-NRC Movement”, shouted slogans such as “Go Back Modi” and carried banners and posters with the same message.

After a while, the protesters allowed vehicles to pass in a single file through the flank, but every time the sound of hooter rang, they blocked the passage to check whether the Prime Minister’s convoy was approaching.

Some in the group kept telling the more excited lot that Modi would not go by road.

The group was sensitive enough to let an ambulance pass quickly. “Let the ambulance pass. We would not act irresponsibly,” an elderly man was heard saying.

A large number of cops had been deployed on the roads leading to the airport. They were checking each and every car taking the flyover that connects VIP Road with the airport. 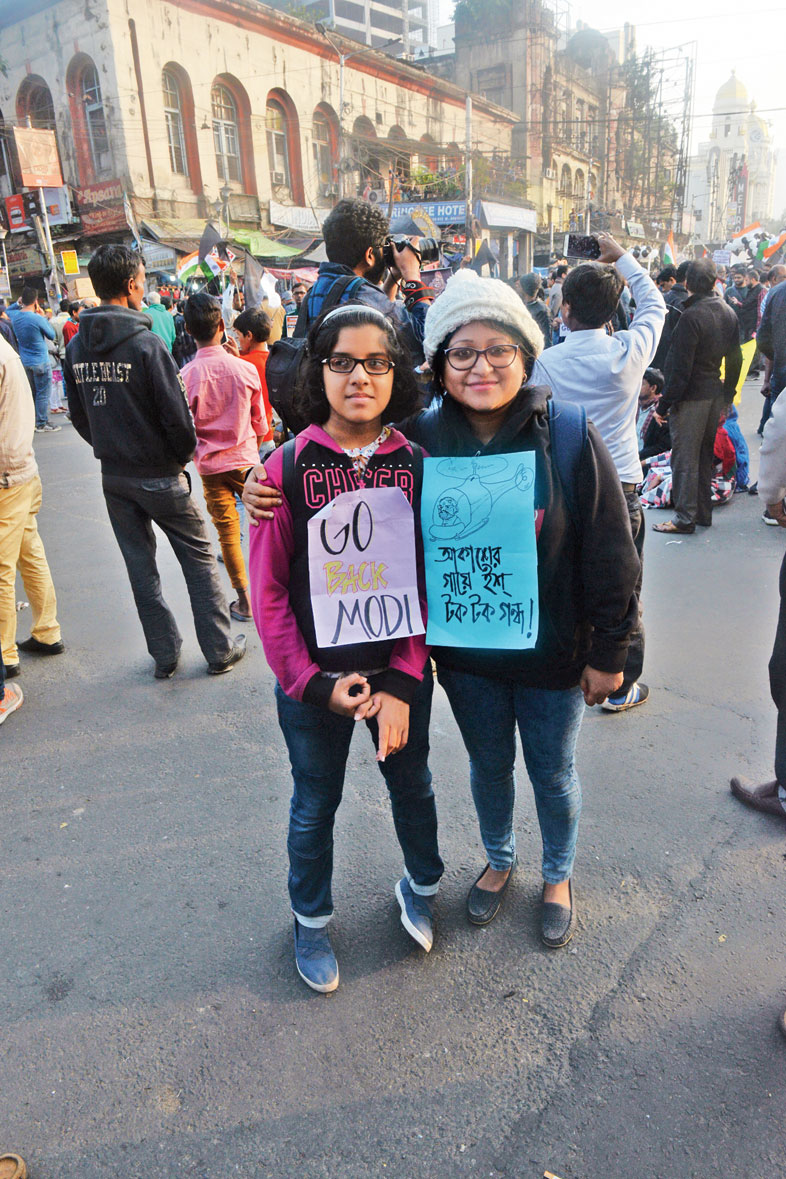 Raya Debnath, a freelance writer, had come with her niece Rupkatha. Debnath was working in New York but came back a year ago because she wanted to “live in her own country”. “This is not the India I had left. The divisive policies of the government have to be stopped at any cost,” she said 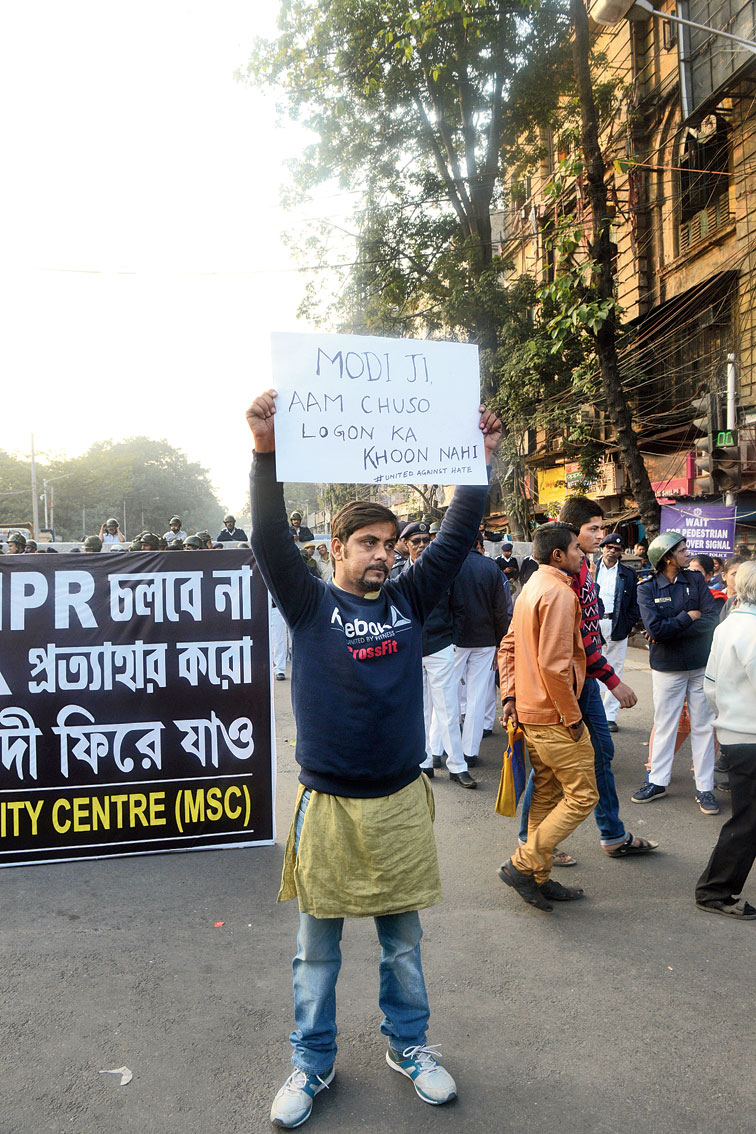 Farrah Shakeb had come from his hometown Munger in Bihar to join the march from Statesman House on Friday. On Saturday, he was at Esplanade carrying a poster that read: “Modiji, aam chuso, logon ka khoon nahi (suck mango, not people’s blood)” 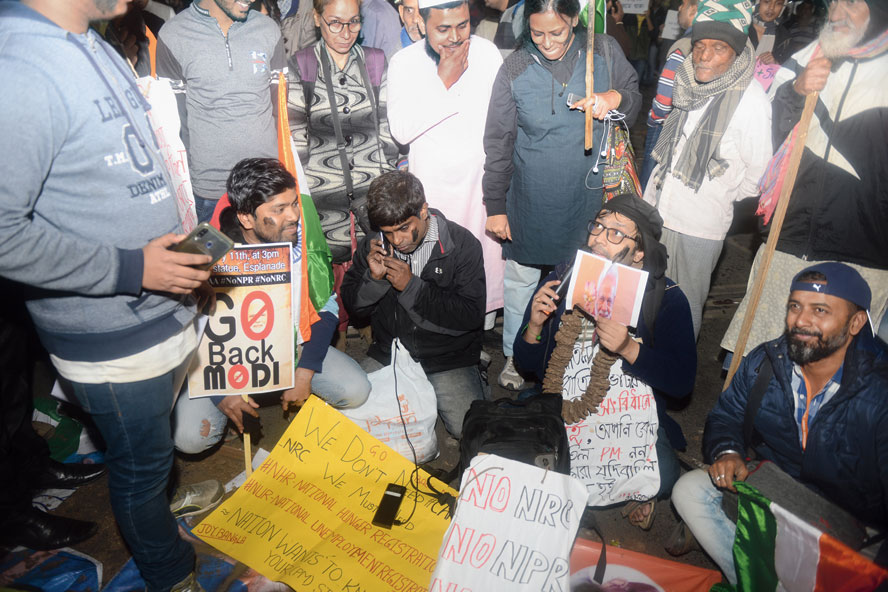 A group of protesters staging a skit on JL Nehru Road on Saturday evening. “I am the first Prime Minister to have lied from the Red Fort….,” said one of them, his face hidden by a Modi mask 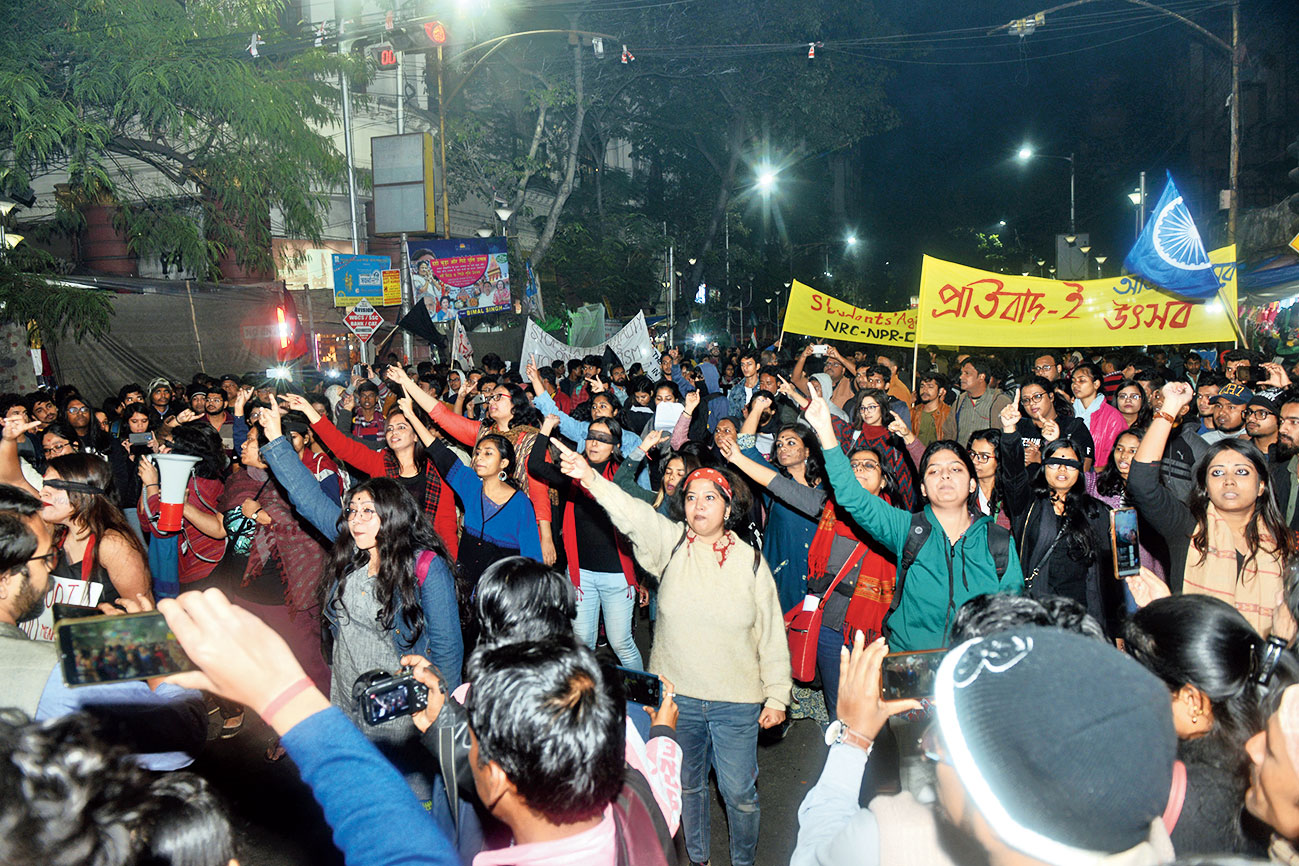 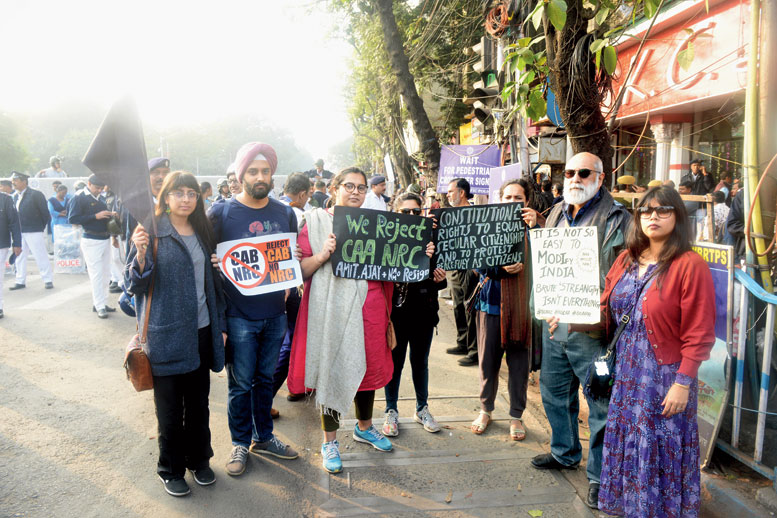 Abeer Chakravarty (second from right), a retired advertising professional, was standing near the KC Das outlet with family and friends. “This is like a family outing, but one of protest. The present situation is worse than the Emergency,” he said 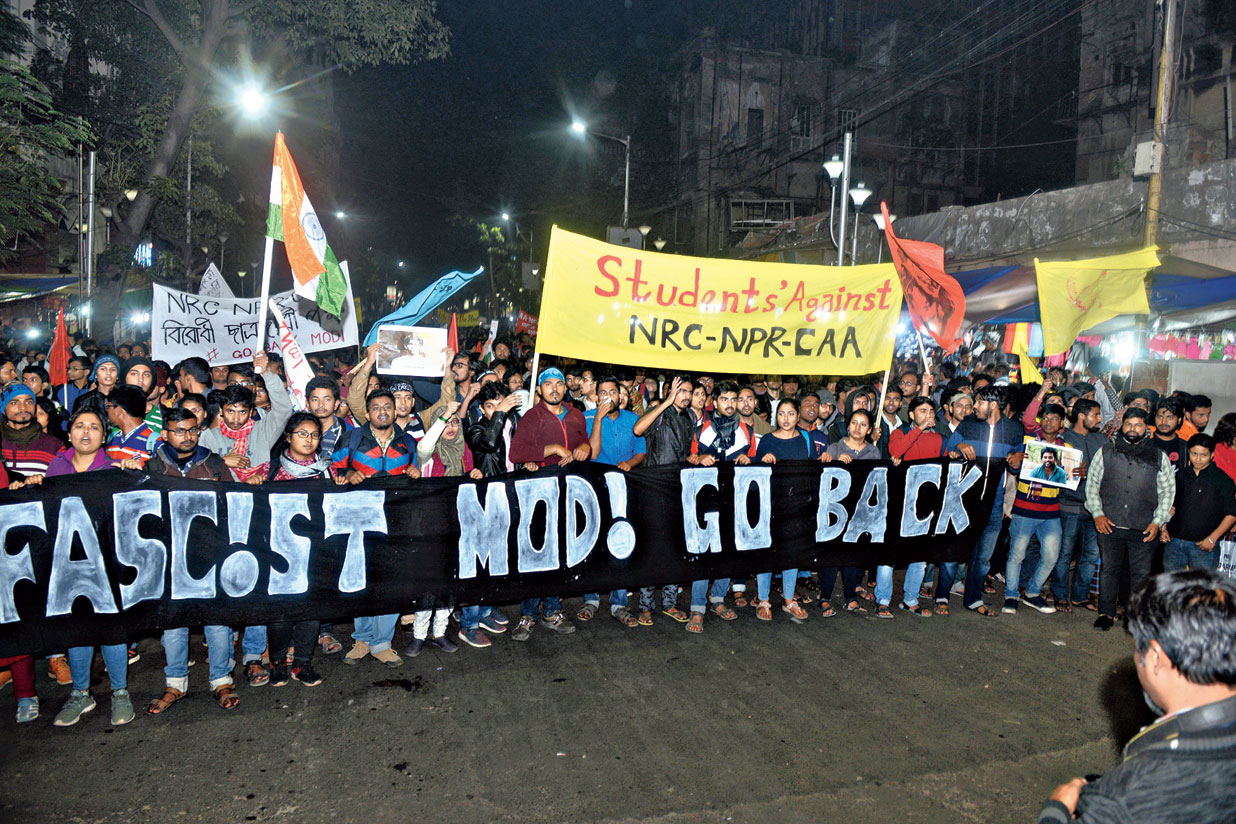 The largest group — a rally of over 2000 students — reached Esplanade at 6.30pm, close to four hours after it started from the Academy of Fine Arts. The students, mainly from Jadavpur University, were diverted at least thrice and came via Park Street and Rafi Ahmed Kidwai Road. But the rally was undeterred by the long detour. When it arrived in front of SN Banerjee Road, a thunderous roar of “halla bol” shot through the sky.
Pictures by Bishwarup Dutta
Kolkata Narendra Modi Protest National Register Of Citizens (NRC) National Population Register (NPR) Citizenship Amendment Act (CAA)
Share
Advertisement
Advertisement
Advertisement
Copyright © 2020 The Telegraph. All rights reserved.