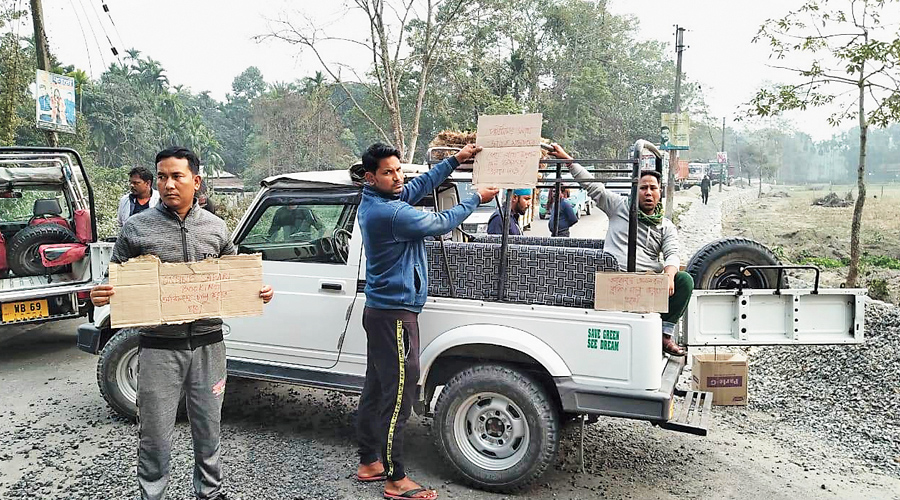 Cab owners who could not take tourists on safari block the Chilapata-Sonapur Road on Monday.
(Anirban Choudhury)
Our Correspondent   |   Alipurduar   |   Published 12.01.21, 01:30 AM

The jeep safari into the Chilapara forest of Alipurduar district — a popular tourist destination in eastern Dooars — has come to a halt for around six days because of a demonstration that has been launched by a section of villagers in front of a range office of the state forest department in protest against an alleged anomaly over recruitment of contractual workers in the department.

However, as the recruitment started, a section of villagers dwelling on the fringes of Chilapata raised questions and alleged that instead of locals, the department is engaging people who are associated with Trinamul and also relatives and acquaintances of forest employees.

Last week, some of them walked up to the range office in Chilapata – the same office from where permits are issued for the jeep safari, locked it down and launched an indefinite demonstration.

In a similar manner, range offices of East Rajabhatkhawa and Damanpur of Buxa Tiger Reserve and the Madarihat range office of Jaldapara wildlife division were also closed by foresters.

While on one hand official works at these offices got affected due to such closure, the tourism sector was also hit in Chilapata as cab owners who take tourists on the safari, could not manage to obtain the permits.

Those associated with tourism in and around Chilapata said every day around 200 tourists enter the forest in safari.

“In Chilapata, jeep safari is the prime attraction for tourists. Now that tourists could not enjoy the safari, many of them are cancelling their trips. The cab owners, resort owners and many others are bearing losses. It is unfortunate that at a time when tourists have started pouring into the region, we have to face such a situation,” said Ganesh Sha, secretary, Chilapata Lodge Owners’ Association.

According to him, around 1,500 people are directly or indirectly associated with tourism in Chilapata.

As the villagers continued their demonstration, the cab owners, who ferry tourists to the forests, raised a token road blockade for an hour along the Chilapata-Sonapur Road on Monday.

A section of them appealed to forest officials to open the range office. The latter, however, made it clear that unless the demonstrators move away, they cannot open the office.

“We are also local residents. Why should we suffer for another protest? The state forest department and the district administration should look into the issue,” said a cab owner.

A forest official, when asked about the impasse, said they have passed the information to their senior officers.

“We understand the situation. But unless there is any specific instruction from higher levels, we cannot make a move,” he said.