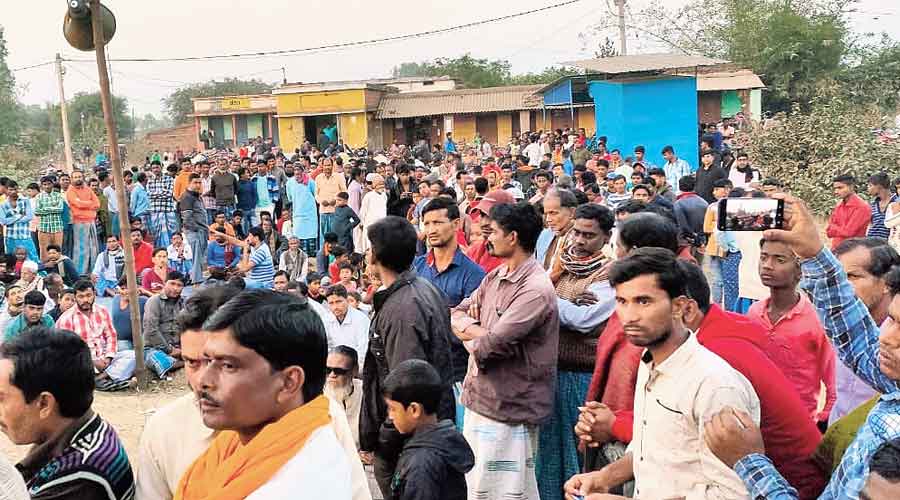 A meeting by villagers on Monday afternoon to discuss the survey related to coal mine
Telegraph picture
Snehamoy Chakraborty   |     |   Published 01.12.20, 02:36 AM

Social impact assessment survey of the Deocha-Pachami coal mine project was halted at Saluka village in Birbhum’s Mohammedbazar after over 100 residents protested on Monday morning against alleged omission of some families from the list of people who could be affected  by the  venture.

The Deocha-Pachami coal block is spread over 11,222 acres with coal reserves of around 2.2 billion tonnes in Birbhum’s Mohammedbazar.

The coal block is so vast that it can generate jobs for at least 1.5 lakh people, said sources.

A 20-member team of an agency hired by the Power Development Corporation Limited (PDCL) was carrying out the survey at Saluka, Kabilpur and Makdamnagar villages when a group of people stopped the work at Saluka and accused the officials of leaving out several families from the ambit of its assessment.

“The surveyors were skipping many families even though they are landholders. There are also many families that live on government or private land but have no papers. We had requested the team to include those people in the survey, but the surveyors did not heed our appeal. We fear that many villagers would be deprived of compensations,” said Ratan Singh, the secretary of Bhumi Raksha Committee, an apolitical platform that was formed a week ago to protect the rights of land losers.

The villagers on Monday afternoon held a meeting under the banner of the committee and decided not to allow the survey till there was clarity about the process.

“We are not against coal mines but we have objections if poor people are left out of the list only because they have no land record,” said Mohammed Hasibuddin, a villager and member of the committee.

The sources said there were a very large number of tribal people in Mohammedbazar who would be affected by the coal mine project.

Even though the government wants to implement the project without any hindrance and had deployed top officials from Nabanna for the purpose, a section of tribal people under the banner of a faction of the Birbhum Adivasi Gaonta had already expressed their displeasure with the coalmine as they did not want to lose their land rights.

“Many people are opposed to the coalmine project and Monday’s protest at Saluka is an example. The protest will become bigger if the government tries to force the project on us,” said Sunil Soren, a convener of the tribal outfit.

“The project is in its primary stage and there could be some misunderstanding,” Birbhum district magistrate Vijay Bharti said when asked about the halt in the survey. “We will overcome this hurdle also.”

Apprehending opposition to the project, the government had in July sent the then chief secretary Rajiva Sinha to Mohammedbazar to hold a meeting with the villagers. Sinha had assured the people that the government’s priority was to ensure that the land losers’ rights were protected.