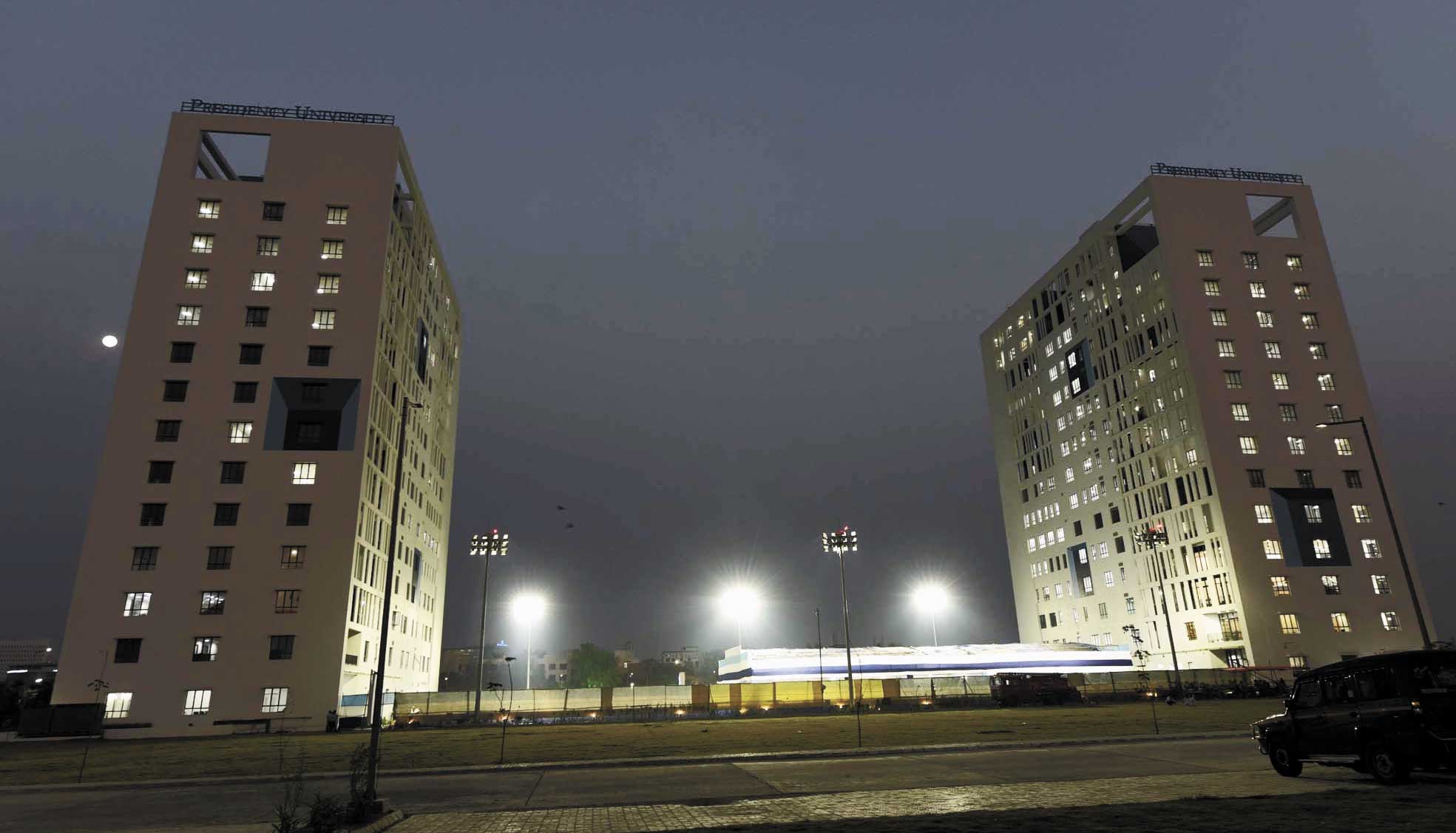 The New Town campus of the iconic College Street institution was inaugurated by chief minister Mamata Banerjee on Monday evening.

Classes on the new campus — two 14-storey towers with a field in the middle — are expected to start in July.

Both towers are centrally air-conditioned and equipped with fire alarms and “state-of-the-art” firefighting devices.

The campus built at a cost of Rs 183 crore over the past two years boasts smart classrooms, advanced laboratories and even a telescope where students will be able to map the night sky and study constellations, vice-chancellor Anuradha Lohia said at the inaugural ceremony.

Chief minister Mamata Banerjee wraps a stole that was presented to her around Presidency University vice-chancellor Anuradha Lohia at the inauguration of the institute’s campus in New Town.
Picture by Sanjoy Chattopadhyaya

“We have been able to take Presidency University to such levels only with the support of our chief minister. We received funds to the tune of Rs 372 crore. We are also building a third campus, Himalayan Centre, at Dow Hill in Kurseong,” Lohia said.

Mamata lauded the new courses on offer, describing them as “interesting subjects”.

“I often ask students why they are leaving Bengal to study. They always reply that the courses they want to pursue aren’t offered in any university here. There is big demand for data sciences and I am happy that new subjects are being offered here,” the chief minister said.

Lohia was initially reluctant to take the stole gifted to the chief guest but relented on Mamata’s insistence.
Picture by Sanjoy Chattopadhyaya

The future of the more than 200-year-old institution is secure for the next 200 years as it is progressing at a rapid pace, Mamata said.

“We should try and ensure that Presidency and Cambridge University are on a par. Likewise, when people think of Oxford University they should also think of Jadavpur University. We gave 10 acres to Presidency University for free. We also provided free land to St Xavier’s University, Jadavpur and Aliah universities as we want New Town to become an education hub,” she said.

The school of public policy of Presidency, Mamata said, will be instrumental in creating civil servants from the state.

“IAS and IPS officers run the country. If we have a set-up where we can groom young men and women from the state to join the civil services, I am sure students from the state will excel,” Mamata said.

She said an exchange programme is on the cards among professors of various universities of the state. Debashis Sen, additional chief secretary of the IT and electronics department and Hidco chairman, and higher education secretary R.S. Shukla were present at the inauguration.