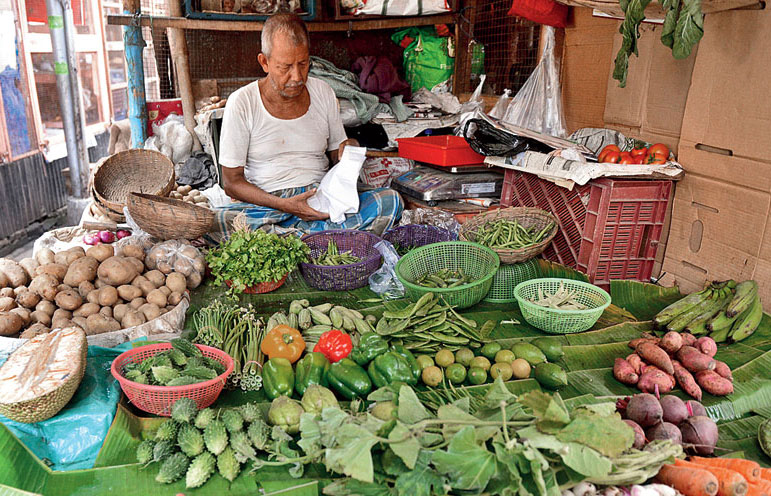 Prices of vegetables have gone through the roof following the unseasonal rain in the last week of February.

Large swathes of low-lying cultivatable land in North and South 24-Parganas, Howrah, Nadia and East Midnapore remained inundated for days following the downpour, which continued in phases for four days, striking a blow to the farmers who were about to reap their produce.

A section of farmers said unlike paddy, most vegetable-bearing plants would turn grey and begin to wilt if water accumulated at the base.

The period between end-February and early-March is the harvesting season for several vegetables, such as green chilly, ladies finger and potato.

Among the worst-hit are ladies fingers, which sold at Rs 100-120 a kg across the city on Monday. Vegetable sellers said ladies fingers would usually sell at Rs 25-30 a kg around this time of the year.

Bottle gourds, which would sell at Rs 10-15 a piece during this time, sold for Rs 30 at Lake Market and Gariahat on Monday. The price of pointed gourds shot up from Rs 40 to Rs 100 a kg at some of the markets.

Traders and farmers blamed the rise in vegetable prices on the rain between February 25 and 28.

According to the weather department, areas in some of the south Bengal districts that grow vegetables received more than 100 mm of rainfall during the period.

Calcutta on those days received 159.1mm of rain.

“I went to Koley Market in Sealdah to buy vegetables. I spent a little over Rs 8,000 on my usual stock, which usually costs around Rs 4,000,” said Madan Mohan Ghosh, a retailer at the Gariahat market.

Around 60 per cent of the ladies fingers sold in Calcutta is sourced from the Diamond Harbour sub-division in South 24-Parganas.

Some of the pockets in the sub-division that grow the vegetable are Mathurapur, Mandirbazar and Kulpi.

Ladies fingers, farmers said, are sensitive and need to be reaped twice a day. Else, they loose tenderness.

“You can understand what happens if water collects at the base of the plants,” said Bimal Kumar Das, a farmer in Mathurapur.

The end-February rain also resulted in a sudden fall in temperature, which prolonged the wintry spell to the delight of most people but delayed the harvest of pointed gourds, especially in parts of the Bongaon sub-division in North 24-Parganas.

“The yield of pointed gourds is directly proportional to heat. The warmer, the better,” said Kamal Dey, a trader at Koley Market, a wholesale hub. “Just when the wholesale markets were expecting a bumper harvest of pointed gourds, the fall in temperature delayed the yield by several weeks. As a result, the price shot up.”

Farmers and agro-producers said the prices of some vegetables, including green chillies and onions, might increase in the next few weeks. The green chilly plants in Kakdwip (South 24-Parganas), Basirhat (North 24-Parganas) and parts of Hooghly district lost their flowers in the rain.

Bengal has had a huge harvest of onions — around 9 lakh metric tonnes — this time and prices would have dropped. But the dampness caused by the rain came in the way of preserving some of the produce.

“The rain in the last week of February and a sudden change in weather have taken a toll on the prices,” said Pradip Majumder, advisor to chief minister Mamata Banerjee on agriculture and agro-produce. “Hopefully, things will look up in the next few weeks.” 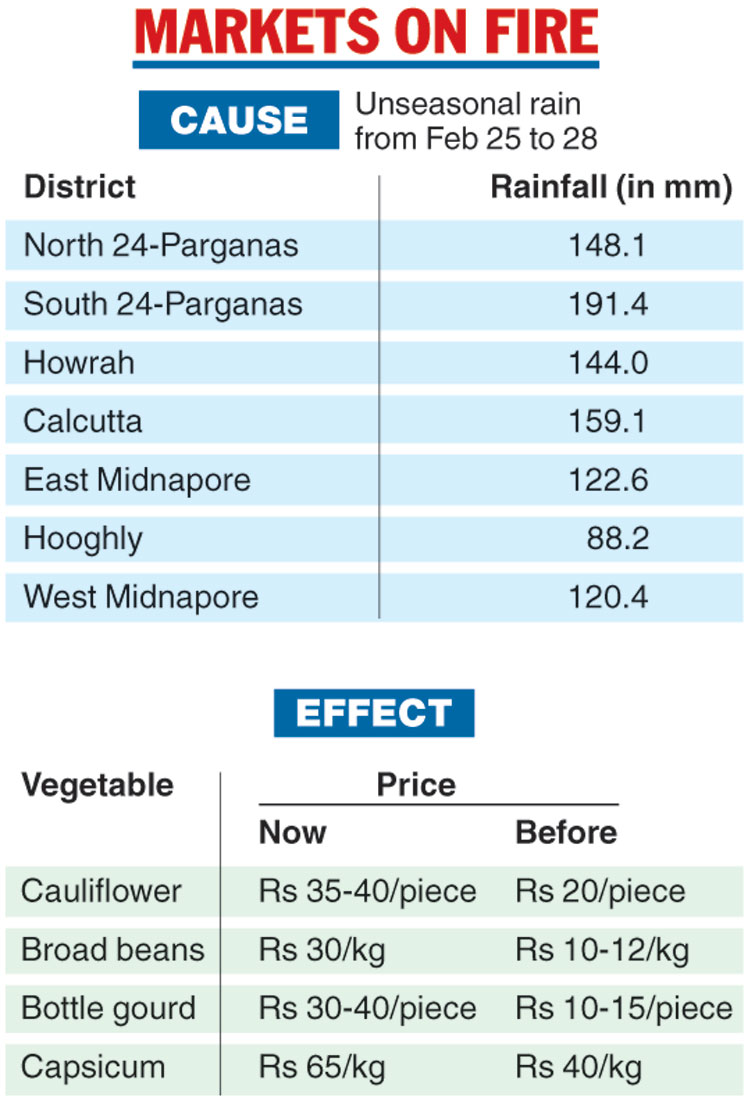