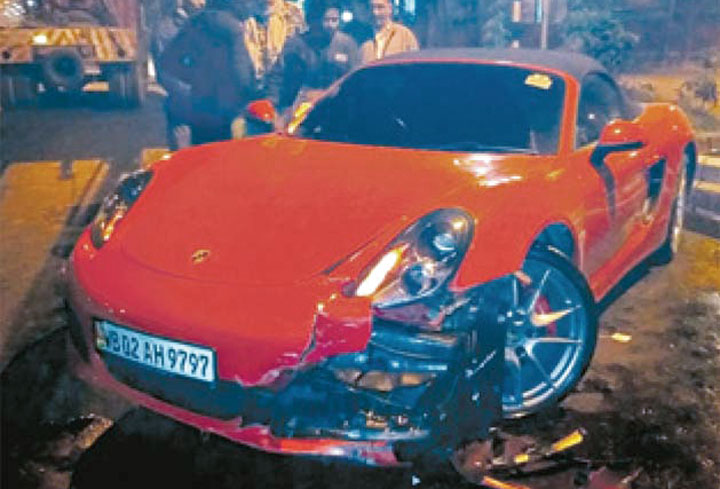 A speeding Porsche 718 Boxster S had spun out of control and hit a median divider near the ATI bus stop at Salt Lake’s Sector III in the dead of night more than two years ago.

Seconds after the crash, the driver had locked the car that has a sticker price of around Rs 1 crore in Calcutta and fled from the spot.

The police have not been able to identify the driver of the Porsche till date.

Police said Arsalan had walked away leaving the Jaguar at the Loudon Street-Theatre Road intersection, where the car had crashed into a Mercedes sending it hurtling into two Bangladeshi visitors waiting near a police kiosk and killing them on the spot.

Metro had reported on January 17, 2017, how the police could not figure out who was driving the sports car that can accelerate from 0-100kmph in 4.9 seconds flat and hit a top speed of 275kmph.

When the police had reached the accident site in Salt Lake, there was nobody except a crowd of startled residents and motorists. Several in the crowd had whipped out their cellphones to click the car’s photograph.

A team from the Bidhannagar South police station had later towed the car away when they could not find the owner.

The next day a representative of the RAA Arsalan Enterprise had landed up with a flat-bed trailer at the police station and took the car away to the service station.

A senior officer, who was posted at the Bidhannagar commissionerate two years back, recalled the night a resident of EC Block rang him up and told him about the crash.

“The caller told me that he had heard the sound of a very high-revving engine coupled with a throaty exhaust note from a distance prompting him to stare out of his balcony that overlooked the roads. He then said that the car tried to take a right turn before the driver lost control and the car spun crashing into the divider,” said the officer.

The officer said that the resident told him that seconds after the crash a man had stepped out of the car, locked it and walked away briskly towards Labony Island. “That was the last that he saw of him,” the officer told Metro.

Soon, a crowd had gathered in the area. The police had to deploy a crane to tow the vehicle away but the driver had faced difficulties as the car did not budge. The disc brakes of all the four wheels had locked and it was only when a steel cable was put around the nose of the car to lift it did it start moving with the rear tyres screeching in protest.