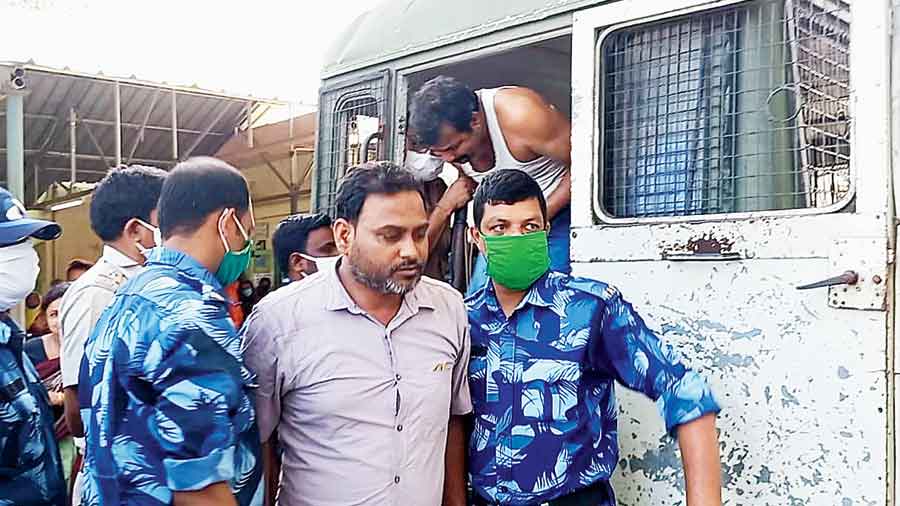 A person arrested for the violence being brought to Raiganj Medical College & Hospital for a medical test on Wednesday.
Kousik Sen
Kousik Sen   |   Raiganj   |   Published 29.07.21, 02:01 AM

Nearly 60 people, including some local Trinamul leaders in Karandighi, North Dinajpur, protested the arrest of two teachers accused of stealing funds, by blocking NH12 on Tuesday night and attacking a police station early on Wednesday.

Nine policemen were injured. Nine protesters were arrested for attacking policemen and for blocking a national highway, the district police chief said.

The protesters had been demanding the release of two teachers of state-aided high schools, arrested on Tuesday afternoon, for siphoning money given by the state government as scholarships to physically challenged and minority community students.

The arrests of Sakir Ali, a computer teacher of Raghabpur High School, and Ehsaan Ali, a contract teacher of Sabdhan High school, galvanised people to gather in front of the police station, demanding the duo’s release.

“When this protest did not work, the demonstrators, some of whom were intoxicated, blocked NH12 near the police station at midnight. This continued till 4am on Wednesday. Suddenly, protesters armed with bricks, stones and sticks attacked the police station,” said Sumit Kumar, the North Dinajpur SP.

Nine policemen, including the inspector-in-charge, were injured. The policemen chased the attackers with batons who fled. The highway was cleared.

It has been also found that two Trinamul leaders of the block, including a youth leader, led the protests and the attack, said sources.

The incident left district Trinamul leaders in an awkward position.

“We have come to know some Trinamul workers were present at the protest in front of the police station. But we have to find out if they were involved in the attack,” said Kanaialal Agarwala, the district Trinamul president.

Sayantan Basu, a state general secretary of the BJP in Raiganj, highlighted the incident. “A group of Trinamul leaders in Karandighi have taken the law in their own hands and attacked the police. It was done to hide the scam in which many of these leaders are involved.”

The teacher duo and the other nine were produced at a local court in Islampur.

The court has sent the teachers to police custody for 12 days and nine protesters to judicial custody for nine days.