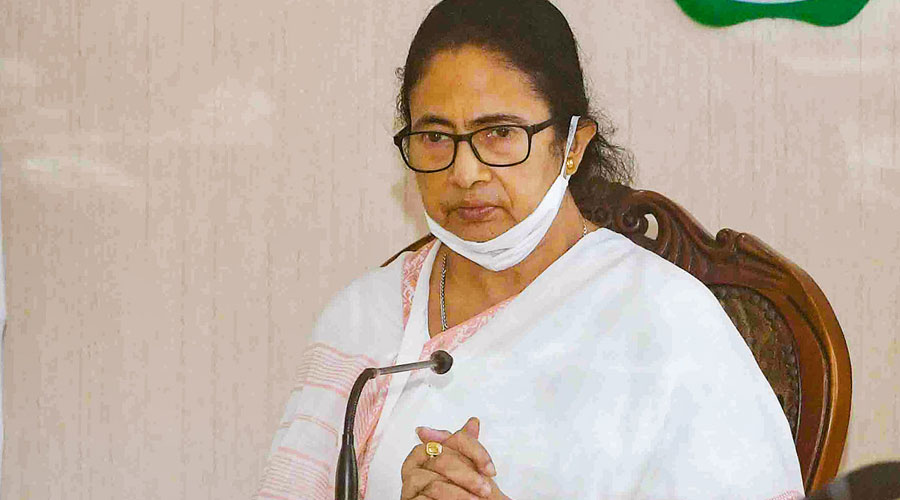 The All India Kisan Sangharsh Coordination Committee, an umbrella organisation of more than 250 farmers’ organisations, on Thursday sent a “draft Minimum Support Price Bill” to Bengal chief minister Mamata Banerjee demanding its implementation in order to safeguard the interests of cultivators in the state.

The AIKSCC has prepared 28 such draft bills, with minor changes, which will be sent to all chief ministers in India. However, the initiative was launched in Bengal since Mamata has pledged her support to the ongoing farmers’ protests against the three contentious central farm laws, leaders of the committee said.

“The chief minister has said she supports the farmers’ movement. MSP is one of the key issues of the movement and hence, we are hopeful that she will be true to her word and implement this legislation in Bengal,” said Avik Saha, the national secretary of the committee.

The draft legislation demands the setting up of an independent commission which will determine the MSP for all farm produce in Bengal, ensure that the farmers can realise the MSP for their yield and also make provisions for redressal of grievances in case one is forced to sell the crop at a lower rate. “The commission will not act under the government. It will consist of members from the farming fraternity, private players and the government,” Saha said while addressing a news conference in Calcutta.

As of now, the MSP of 23 agricultural products is decided on by the Commission for Agricultural Costs and Prices (CACP), an attached office of the Union ministry of agriculture and farmers welfare. The organisation has demanded the inclusion of all farm products, including those related to horticulture, pisciculture and beekeeping, in the ambit of the independent commission, along with 23 items overseen by the CACP.

The Bengal government runs the Krishak Bandhu scheme which ensures an annual monetary help of Rs 10000 to farmers with a cultivable landholding of an acre or more. For farmers holding less than an acre of land, the sum assured is Rs 4,000 per annum.

However, sources in the state government said the demand of fixing an MSP for all farm produce in Bengal was “a difficult proposal”. Officials told The Telegraph that the government procures only two kinds of agricultural produce, rice and jute. In case there is a distress call from farmers, the government has procured potatoes as well.

However, for almost all other produce, Bengal has to depend on other states. “The open market functions in its own way. If the government intervenes in products other than rice and jute, the natural flow of the economy will be disturbed. Since, we don’t produce a surplus of other products such as fruits and vegetables and largely depend on imports, there is not much logic in defining an MSP for these goods,” a source in the state’s agriculture ministry said.

This person added that it was also practically impossible to procure all or even a large share of all that was produced for the government, since it didn’t have enough cold storage chains and other allied infrastructure.

“For the potato, we have enough cold chains. Hence, in times of crisis, we can procure it directly. But the same isn’t true for say the tomato or the brinjal. These are all perishable goods. The state will have to incur huge expenses for setting up new infrastructure for these products,” this official said.The AIKSCC, however, said it didn’t want the government to procure the state’s produce. Rather, it wants the state “to perform its responsibilities” towards the farmers by ensuring a minimum earning for them.

“Even if the private players are purchasing the farmers’ produce, they must not pay them below the fixed MSP. That is what the government has to ensure,” AIKSCC’s Saha said.

“Even if the farmer has to sell his goods below the fixed rate in the open market, the draft law has provisions for redressal. The government just has to enact the law,” he added.The AIKSCC has said it will launch a Singhu-Tikri like farmers’ protests in Bengal if the state government fails to enact the MSP law.

“The state doesn’t share the data of farmers’ suicide. It claims the earnings of the farmers have multiplied three times, which is wrong. We hope it will at least accept our draft legislation. Otherwise, we will launch major protests in Bengal,” said Kartik Pal, the state secretary of the AIKSCC.

The Sanjukta Kisan Morcha, the organisation spearheading the farmers’ movement across the country, has decided to write to all chief ministers of the country urging them to support the September 27 nation-wide strike called by the Morcha.