Mismatch in the Persian and the English translations 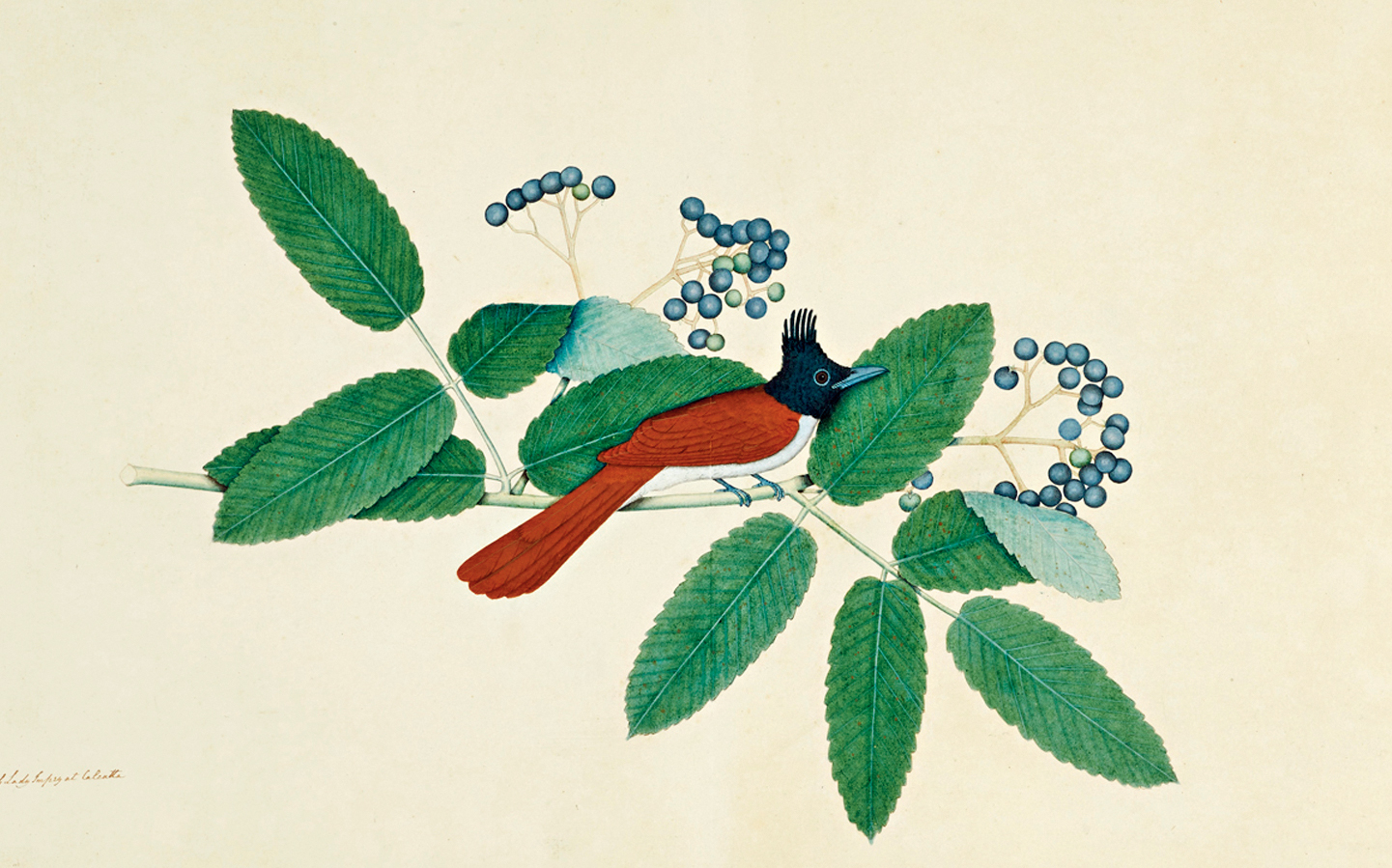 The two paintings by Zayn al-Din that went under the hammer in Sweden’s Stockholm. The Persian name of the bird in the picture above is shah bulbul, which according to natural history and conservation experts is paradise flycatcher.
(Stockholm Auction House)
Debraj Mitra   |   Calcutta   |   Published 23.06.19, 09:37 PM

The bird is the picture above is madna tota. Its English name, according to an expert, is red-breasted parakeet
(Stockholm Auction House)

Natural history and conservation experts have pointed out to Metro that the English names of the birds and flora in the two 18th century Calcutta paintings that were auctioned in Sweden on June 12 might not have been the best translation of their accurate Persian description.

The watercolour and pencil-on-papers by Zayn al-Din, one of the pioneers of the Company School of Art, include a description of the subjects in Persian — Darakht ban falsa, Shah Bulbul in the first and Madna Tota, Darkaht Pakar in the other.

The Stockholms Auktionsverk (Stockholm Auction House) had titled the two artworks — procured from a Swedish family — Falsa Tree with King’s Nightingale, dated 1782, and Parrot in a Parkar Tree, dated 1779.

After a report on the two paintings was published in Metro on May 25, Ananda Lal, a former professor at Jadavpur University, wrote to this newspaper pointing out what he said was an inaccuracy in the translation.

“The rufous bird with crest is a female paradise flycatcher (Terpsiphone paradisi). The artist had labelled it correctly by its Hindi/Urdu name, shah bulbul. Whoever translated that as king’s nightingale did so literally, without trying to identify the bird,” wrote Lal, who has a keen interest in the subcontinent’s natural history and its documentation.

“Similarly, the other bird’s name, madna tota, is Hindi/Urdu for red-breasted parakeet (Psittacula alexandri), not just any generic parrot. The painting matches its colours perfectly, except that its reddish front is hidden from view,” Lal wrote.

Told about the alleged mismatch in the Persian and the English translations, Stockholms Auktionsverk said the translation was not done by the auction house.

“We have used the titles that were written on reverse of the artworks when we added them to our catalogue, which is the common procedure. The titles on the reverse were most probably written by a family member of the current owners, as the artworks have been in the same family’s hands for generations. We are unsure of who did the previous translation, and when this was added to the artworks,” said Victoria Svederberg Bojsen, a specialist in classic and modern art at the Stockholms Auktionsverk.

According to Lal, there are gaps in the “precise botanical nomenclature” of the trees in the paintings as well. “The falsa, properly transliterated as phalsa, is Grewia asiatica. The parkar is wrongly spelt; it is obviously a pakur, or Ficus virens, synonymous with Ficus infectoria. The painter had carefully delineated its white figs,” he wrote.

This newspaper had also sent the pictures to Bikram Grewal — ornithologist, author and conservationist. “Nightingales are not native to India. The first bird is a paradise flycatcher. It is either a female or an immature male. The other bird is a parakeet,” said the Calcutta-born Grewal.

Birder Sujan Chatterjee said a major difference between parakeets and parrots lies in the tail. “Parkeets have long slender tails while parrots have a square-cut tail,” he said. The madna tota in Zayn al-Din’s artwork does have a long tail.

A teacher in the UK who is researching on the natural history drawings produced between the late 18th and early 19th centuries in Calcutta echoed Lal on the “inaccuracies” in the English titles.

“The Persian titles are accurate names of specific species (of birds and trees) local to the Bengal region, whereas the English titles are somewhat inaccurate. For example, the first painting is that of a shah bulbul in a ban phalsa tree. If we search by these names, we find the leaves of the tree have medicinal properties. This was the main rationale of collecting information — nearly all of the trees and plants in Zayn al-Din’s paintings have medicinal or food value,” said Nandini Chatterjee, an associate professor of history at the University of Exeter.

“The bird in the second picture is actually madna tiya (in Bengali) and the tree is pakur (in Bengali). It seems to me that the Persian names were written by someone who was not a native Bengali; they heard Bengali names and wrote them in Persian just as a north Indian person would, with some automatic translations (tiya became tota and pakur became parkar). It’s like a Chinese whisper,” said Chatterjee.

The pictures were commissioned by Mary Impey, an English natural historian and patron of the arts in Bengal. The wife of Elijah Impey, the first chief justice of the Supreme Court at Calcutta, Mary was among Europeans who commissioned paintings of Indian natural history.

The Impeys moved to India in 1773. They set up a menagerie at their house in Calcutta’s Middleton Row. When they shifted to Fort William two years later, they started a collection of native birds and animals. Mary’s three principal artists were Sheikh Zayn al-Din, and brothers Bhawani Das and Ram Das. All three had come from Patna.

“Apart from the pictorial documentation of flora and fauna, such patrons kept notes about their classification and nomenclature,” said Jayanta Sengupta, the curator of the Victoria Memorial.

The monument has a collection of paintings commissioned by John Fleming, a British medical doctor who hired a team of Indian artists to paint plants and animals. The Fleming Collection has a separate list of inventories that describes the English name of every subject.

The list has the names of the birds and animals in three languages. Some have the local Bengali names written in English, some have the Persian names and some have their Latin names.

Sengupta said Persian was the official language of the administration in India when Zayn al-Din was painting. “There is every possibility that Mary Impey knew Persian. For her, shah bulbul could have been more acceptable than the term paradise flycatcher, if it was in use back then,” Sengupta said.

He said the pictures might have passed several hands before reaching Sweden. “That could be the missing link about the description.”

Bojsen from Stockhom said changes would be made in the online catalogue on their website. When Metro checked days before the auction, the first painting was titled “female paradise flycatcher in phalsa tree”. The title of the second picture read “Red-breasted parrot in a Pakur Tree”.

The collection went to England with the Impeys in 1783 and were sold at a London auction in 1810. Several pieces are in various museums, including the Metropolitan Museum of Art in New York and the Victoria and Albert Museum in London.