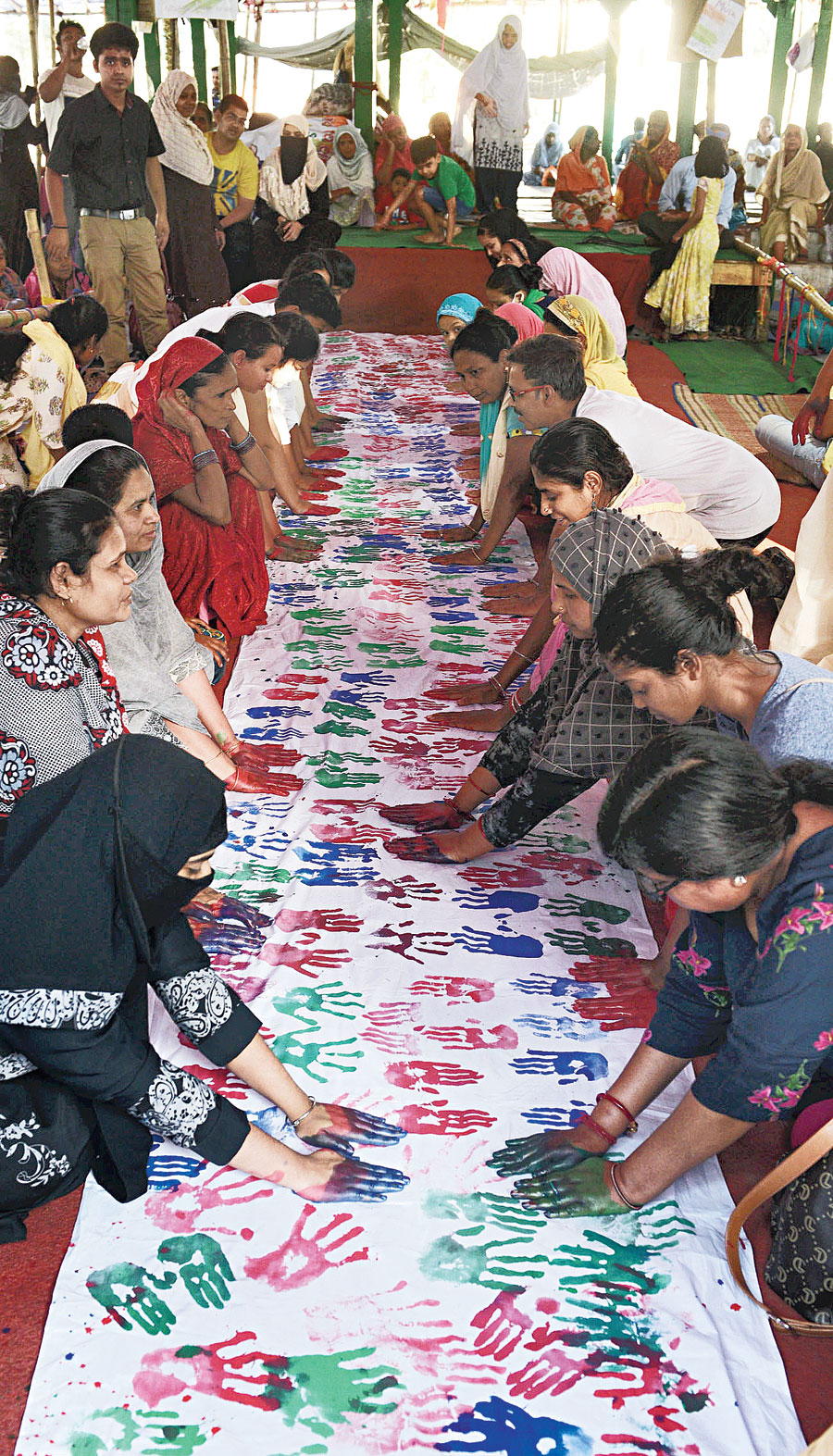 Park Circus Maidan, where a women-led protest against the new citizenship regime has been on since January 7, witnessed scenes of camaraderie with people celebrating Holi.

On Tuesday, the women on vigil against the Citizenship Amendment Act and the National Register of Citizens dipped their hands in buckets filled with colours and placed their palms on a 20ft-long white cloth. They were joined by a number of visitors.

The result was a colourful collage of palm impressions, which was put up along the perimeter of the ground, while Tagore’s poem “Chitto jetha bhoyshunyo” was being recited along with its English rendition (“Where the mind is without fear”).

Gurmel Singh, 74, walked into the ground with wife Bimla Rani around 4.30pm. The couple is on a 28-day vacation in Bengal and has visited the Sunderbans, Murshidabad and Belur Math. 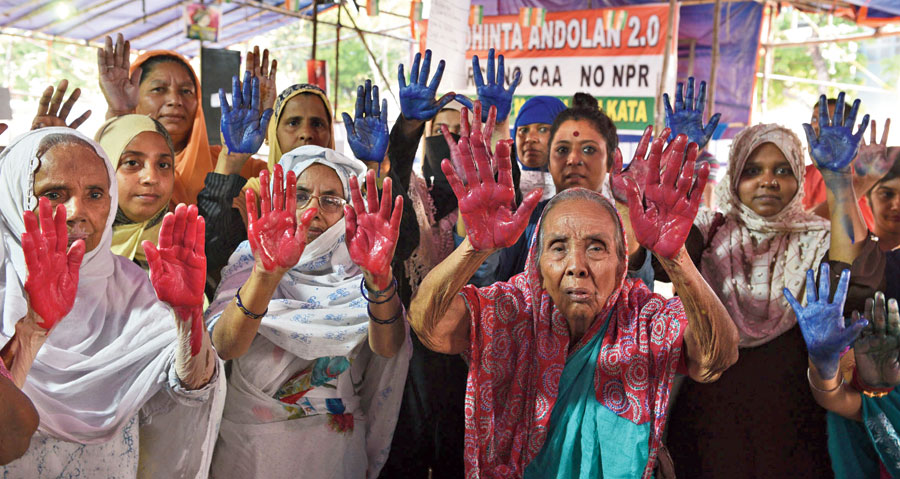 Singh said he had kept all of Tuesday to be with the protesters at Park Circus Maidan.

“I have been reading about the vigil at Park Circus and was longing to come here and be a part of it. We came in a car arranged by our hotel,” said Singh, who retired as a chief medical officer at a government-run hospital in Punjab.

The couple filmed the proceedings on a cellphone and joined the protesting women in leaving their palm impressions on the white cloth.

“This (the citizenship regime) is a discriminatory move by the government and we must take part in protests. What has happened in Delhi is scary, to say the least. But here I am happy to see people from all walks of life come together and show solidarity with the protesting women,” said Singh.

As Singh tried to get the hang of the cultural programmes, Sujata Mukherjee, a resident of Kasba and a teacher, explained to him the significance of the songs and dance sequences.

The two were strangers till they met at the ground.

Samarpita Chanda and her group staged a dance sequence based on Hum Dekhenge, a poem by late Pakistani poet Faiz Ahmad Faiz. The poem has been in the centre of a storm since December 17, the day a group of students of IIT Kanpur sang it to protest the Citizenship Amendment Act and faced the wrath of the administration. 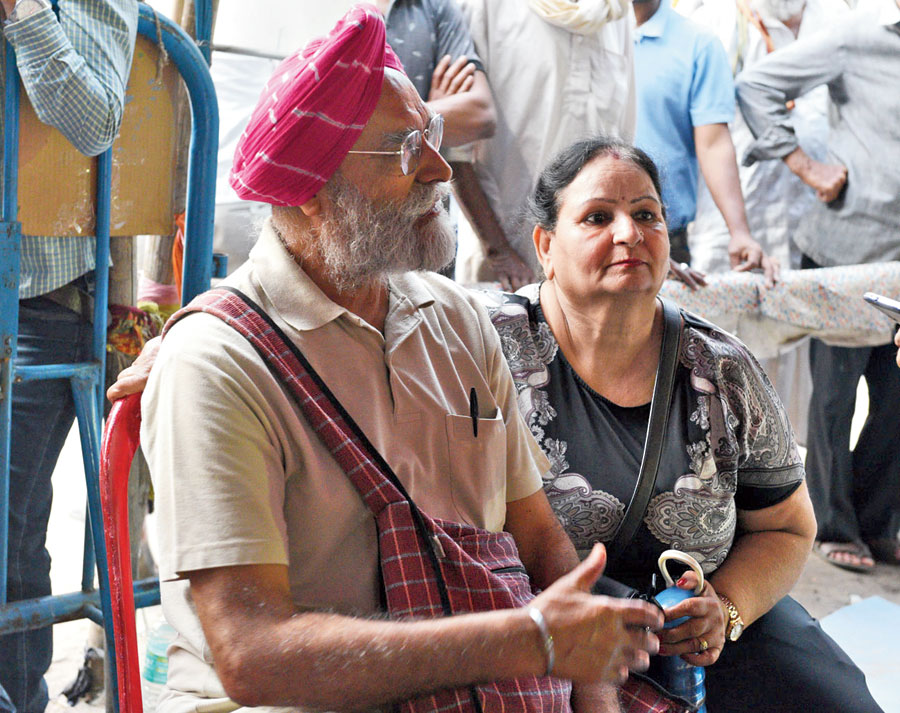 “Dance is a powerful medium and we chose this (the poem) to register our protest. We also threw abir in the air and played Holi with the women and children here,” said Chanda.

Mohammed Babar, 42, was one of those who turned up at Park Circus Maidan with the Tricolour, his son and daughter in tow.

Babar, a resident of Ismail Street in Entally, said he made it a point to be at the protest site as he was worried about the future of his four-year-old son Mohammed Aatir Babar and daughter Afseen, who studies in Class I. 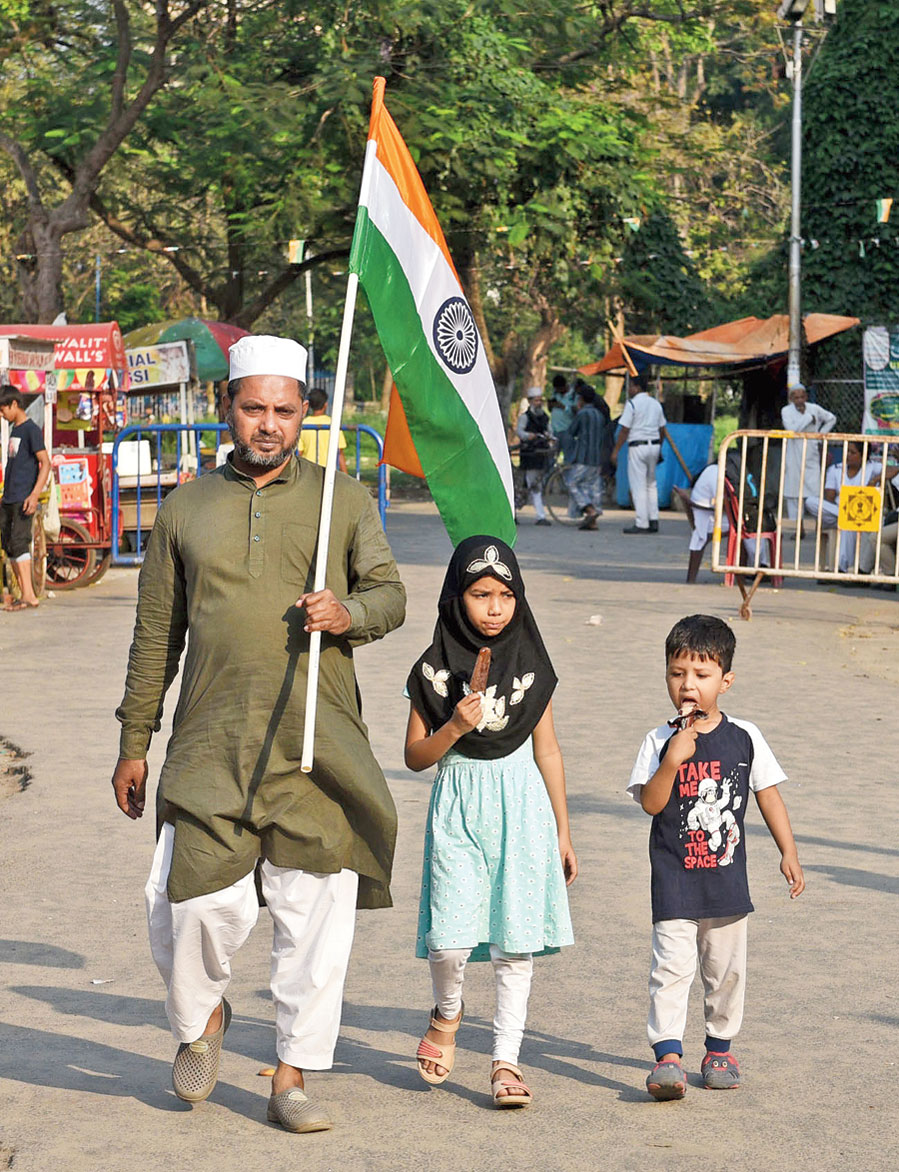 “Yeh humara mulk hai (This is our country.) Our forefathers had chosen to stay here. Why would we run after documents just because the government wants us to?” asked Babar, who runs a gift shop near his house.

As the day passed by, a steady stream of people kept converging at Park Circus Maidan. While many brought abir, some carried sweets, which were distributed among protesting women. By 4pm, the protest site was abuzz with cultural programmes and cries of “Azaadi”.

One of the stars of the day was 80-year-old Mehurnissa, who has been coming to the protest site every day. Even though she needs help walking, she went around the ground with a packet of colour.