Advertisement
Home / West-bengal / Overnight, Modi wakes up to Vidyasagar and his vision

Overnight, Modi wakes up to Vidyasagar and his vision 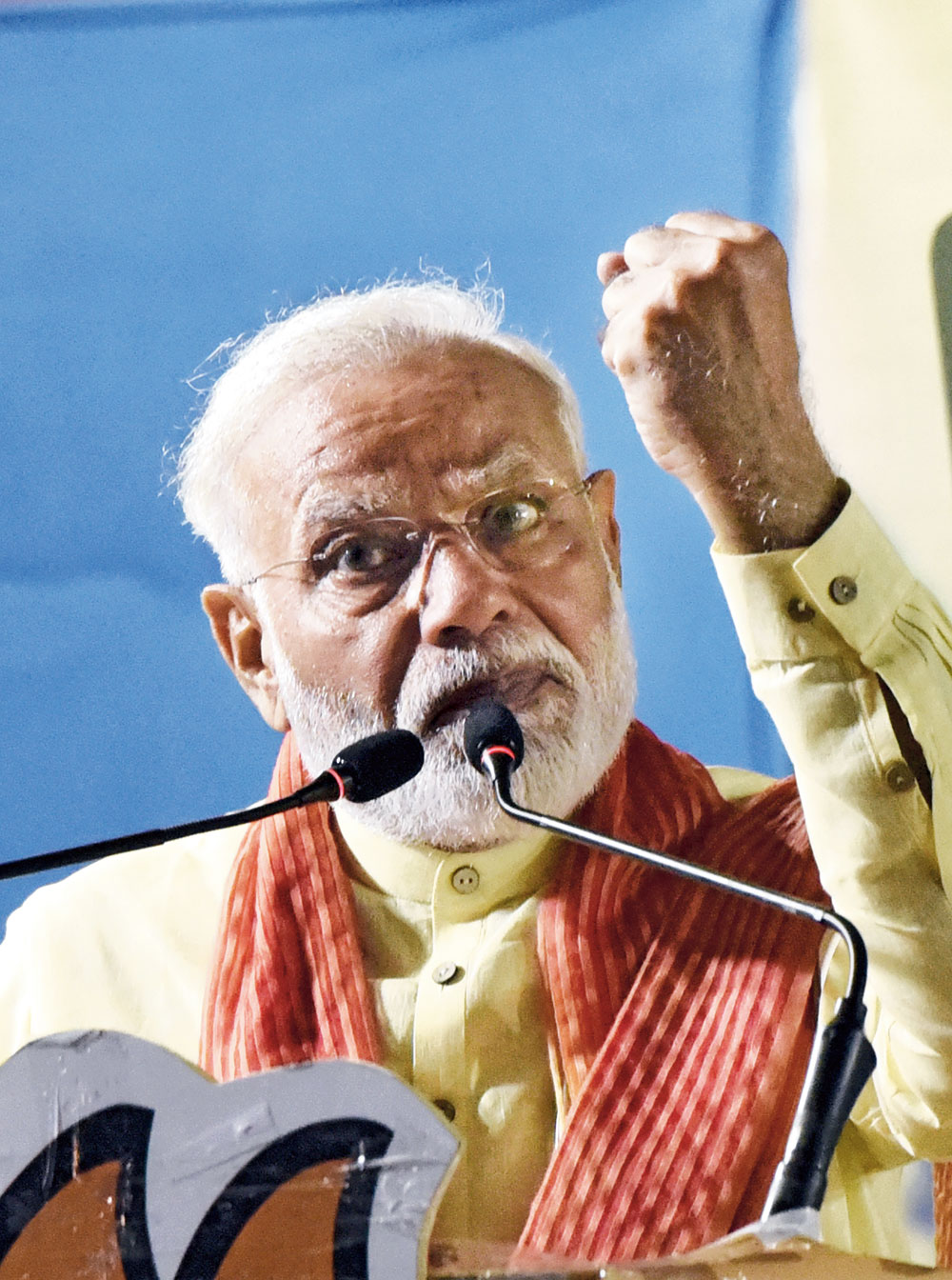 Modi addressing an election rally in Dum Dum, his last in this election in Bengal, on Thursday
Picture by Sanat Kumar Sinha
Meghdeep Bhattacharyya   |   Calcutta   |   Published 17.05.19, 01:23 AM

Prime Minister Narendra Modi on Thursday morning promised to replace the damaged bust of Ishwarchandra Vidyasagar with a new statue cast in panchadhatu (five-metal alloy), taking nearly 40 hours to break his silence on the revered Bengal Renaissance figure whose bust was vandalised during BJP chief Amit Shah’s road show in Calcutta on Tuesday.

“I also want to say that my government, which is dedicated to the vision of Ishwarchandra Vidyasagarji, will install a magnificent panchadhatu statue at the same place,” Modi told a rally at Mau in Uttar Pradesh on Thursday.

On Wednesday, a day after the vandalism, Modi had addressed two rallies in Bengal and referred to “eminent sons” of the state. However, although the entire discourse of the day revolved around the destruction of the Vidyasagar statue, the Prime Minister had made no mention of the polymath even though he had made an oblique reference to the violence on Tuesday.

Between Tuesday night and Thursday morning, the Opposition had cited the vandalism of the bust and Modi’s silence on one of the tallest social reformers in the country as proof of the BJP’s disconnect with Bengal.

Such was the backlash that Modi, who rarely shows any sign of rethink once he decides on a political course, appears to have been compelled to try and make amends overnight at a time the last phase of polling is pending in Bengal.

Modi not only sought “the harshest punishment” for the vandals, whom he described as “TMC goons”, he also took pains to underscore the existence of an umbilical cord between the BJP and Bengal. “The culture of Bengal forms the essence of the BJP government. From the Vedas to Vivekananda and from Netaji Subhas Chandra Bose to Dr Syama Prasad Mookerjee, our mind and heart is influenced by the energy of Bengal,” the Prime Minister said in Mau.

Mamata hit back: “The Prime Minister has no shame. He is lying at a public rally in Uttar Pradesh. Their goons vandalised the statue, but he is blaming us.”

Modi’s unusual choice of place, Uttar Pradesh, to make the statement on Vidyasagar although he was heading to Bengal from the heartland did not merely reflect his sense of urgency.

The Prime Minister sought to use the issue to divide the Opposition, too, by asking Mayawati why she was not protesting attempts by Mamata to brand people from the heartland as “outsiders” and blaming them for the vandalism. “I had thought that Mayawati would tell off Mamata Didi who has labelled the people of UP, Bihar, Purvanchal as outsiders for her politics. But that didn’t happen because she (Mayawati) doesn't care about you. She has to play the power game.”

Modi appears to have taken some liberties with what Mamata had actually said. The Bengal chief minister had not called the people of Uttar Pradesh per se outsiders. What she had alleged was that the BJP had brought in outsiders from Uttar Pradesh and other heartland states to foment trouble in Bengal.

Later in the day, when he addressed two rallies in Bengal on the last day of campaigning in the state, Modi made elaborate references to Vidyasagar. But at the Bengal rallies, Modi did not renew his pledge to build the panchadhatu statue, which Mamata had rejected by then.

A Trinamul politician claimed that even Modi’s promise betrayed the ignorance of Bengali culture that the BJP is being accused of. He said Hindus in Bengal deemed the ashtadhatu (an eight-metal alloy) more auspicious than the panchadhatu, unlike some other parts of the country.

State BJP sources said Modi was showing indications of “some course correction” in his Bengal rallies, delivering speeches “that have become more Bengal and Bengali-friendly”.

However, they would not say even off the record whether the Bengal unit had given Modi any feedback on the “sensitive” subject. “He understood the importance of this himself and thought it was the right time to talk about it,” BJP national secretary and Calcutta North candidate Rahul Sinha said.