According to data obtained earlier in the evening, South 24-Parganas was at the top, having vaccinated nearly 11,000 teenagers in the 15-17 age group by 4.30pm 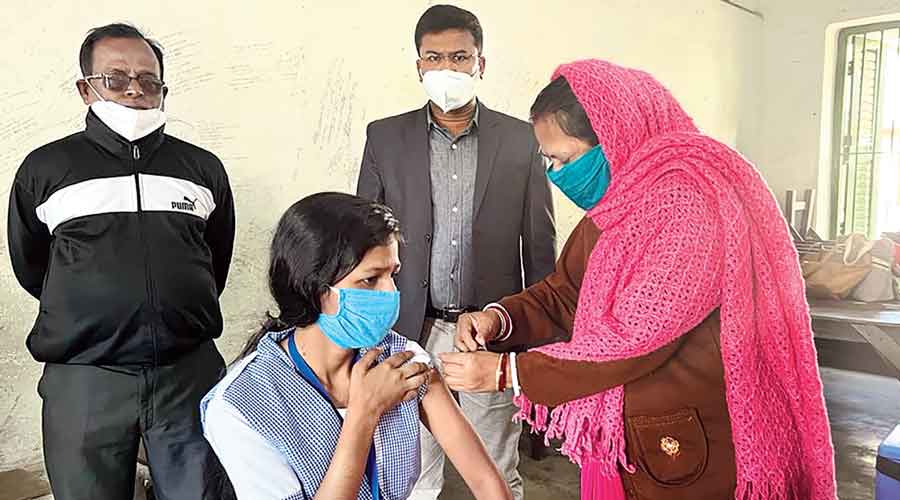 Bengal administered the first dose of Covid-19 vaccine to over one lakh minors from  age 15 and above, touching 102,829 at 8pm on Monday, the first day of the drive.

The number of jabs achieved on Day I raised hopes among several health officials that the target to complete the first dose for age bracket in a month was achievable.

“We had the target of vaccinating one lakh adolescents on the first day. We met it despite schools being shut,” said a senior health official in Calcutta.

“This (keenness to get the jab) is usually the trend when the number of new infections detected are high,” he added.

On Monday, the state health department started vaccination for the 15-17 age group in all medical colleges, 37 urban public health centres and 16 Calcutta-based schools.

In the rest of the state, a school each was chosen to vaccinate people from the age group in 479 blocks and urban local bodies. This apart, 338 hospitals in Bengal were also asked to arrange jabs for the age group.

Schools were shut in keeping with the re-imposed curbs, but the skeletal staff was called in to handle the vaccination drive.

“If schools were open for in-person classes, it would have been easier. But Day I was not disappointing. We hope parents appreciate the need to vaccinate their children,” said an official associated with the vaccination department of Swasthya Bhavan.

Suvradip Halder, headmaster of Kanailal Vidyamandir (English section) in Hooghly’s Chandernagore, said: “On Monday, we had set a target of vaccinating 153 students of Class XII. We could vaccinate 105. Some had turned 18

(eligible for jabs in the 18-44 years age bracket, which has been on since May last year), and so they got vaccinated earlier. A few others were unwilling.”

According to the government’s policy, each school would organise vaccination camps for four consecutive days to vaccinate students between Classes IX and XII.

A health official, however, put in a word of caution. “It might not be possible to bring students in large numbers from their homes to schools if Covid-19 cases keep increasing… more so if the restrictions are tightened further by the state government,” said the source.