Advertisement
Home / West-bengal / Our march down Red Road in Calcutta

Our march down Red Road in Calcutta 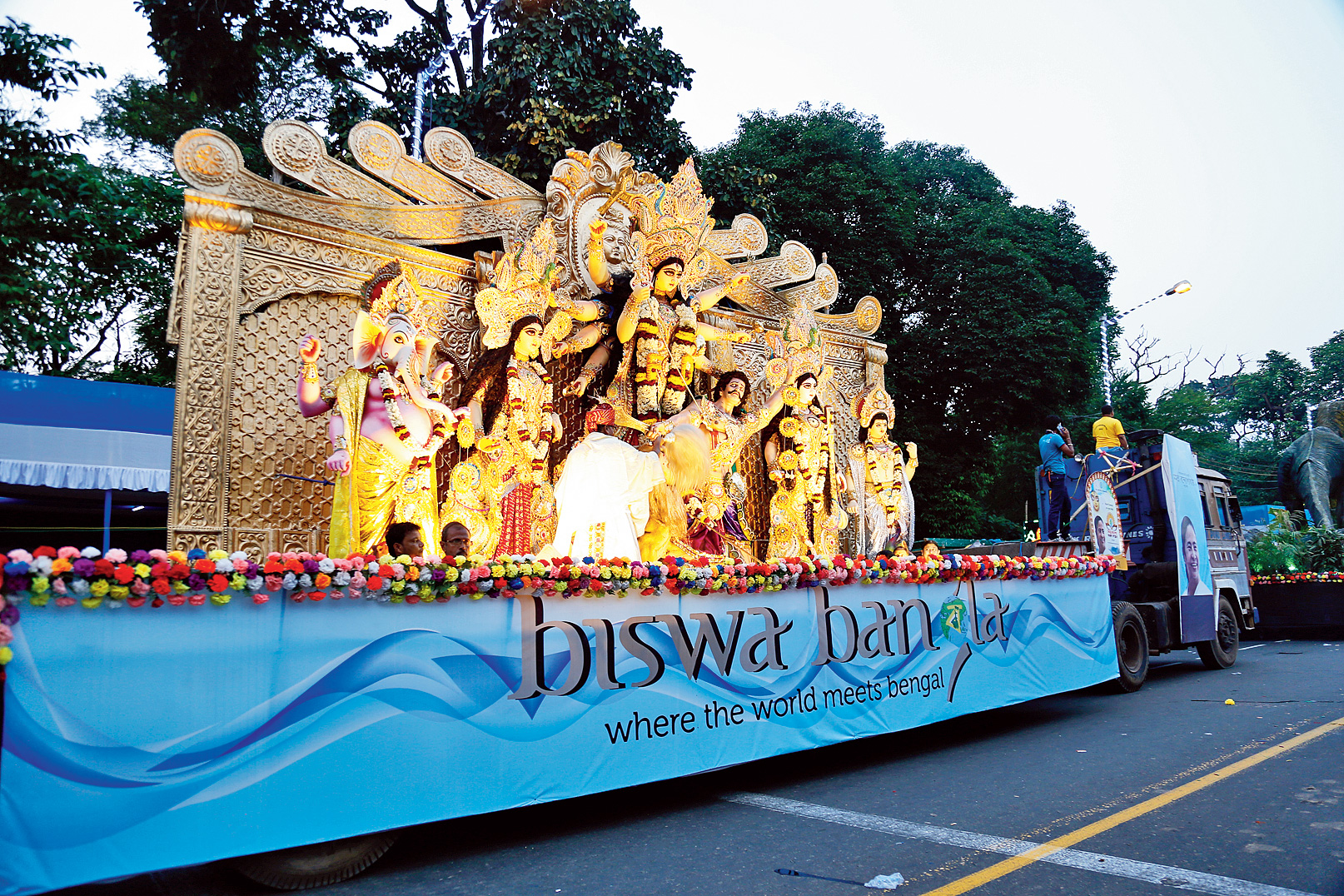 We reached the venue by 3.30pm, an hour before the programme was scheduled to start. Thanks to our trolleys reaching the night before, we were queued at number 12 which was quite early given that there were 72 pujas in the fray. The walk from the parking area to the idol, nearly a kilometre long, didn’t seem exhausting at all. Right before us stood the Chorbagan idol. Since we had some time to spare, some of us decided to take a look at the other idols in between taking selfies and pictures, and posting Instagram stories as members of the older generation lounged around tea stalls.

The march started on time, and we finally had a measure of the honour bestowed upon us. Durga Puja has never limited itself to religion.

It is a celebration of art, architecture, installation, sculpture, music-all that Bengal represents. And standing in the midst of the handiwork of so many great artisans, we were at once humbled and overjoyed. We slowly started the walk to the sound of beating dhak. Leading our way were a few uniformed policemen. And behind us were the idols and sculptures and an LED screen displaying vignettes from our puja this year. On either side, the flashing cameras made the boulevard look like a long illuminated garland. A few paces down, the decorated dais with celebrities came in view, and right beside them on a separate stage was the smiling chief minister, keenly following the procession. As we passed by, we greeted her with folded hands, a gesture she graciously returned.

After our display, the policemen separated our group into two-the ones who would be going to Babughat for the immersion and those of us who would be staying back as not everyone was allowed to proceed to avoid congestion. We hung around at the roadside, enjoying refreshments. Friends and families called us to report what they had seen on TV, who could be spotted, and some even recorded the live telecast for us to check later. It was nearly 10pm when we all returned. 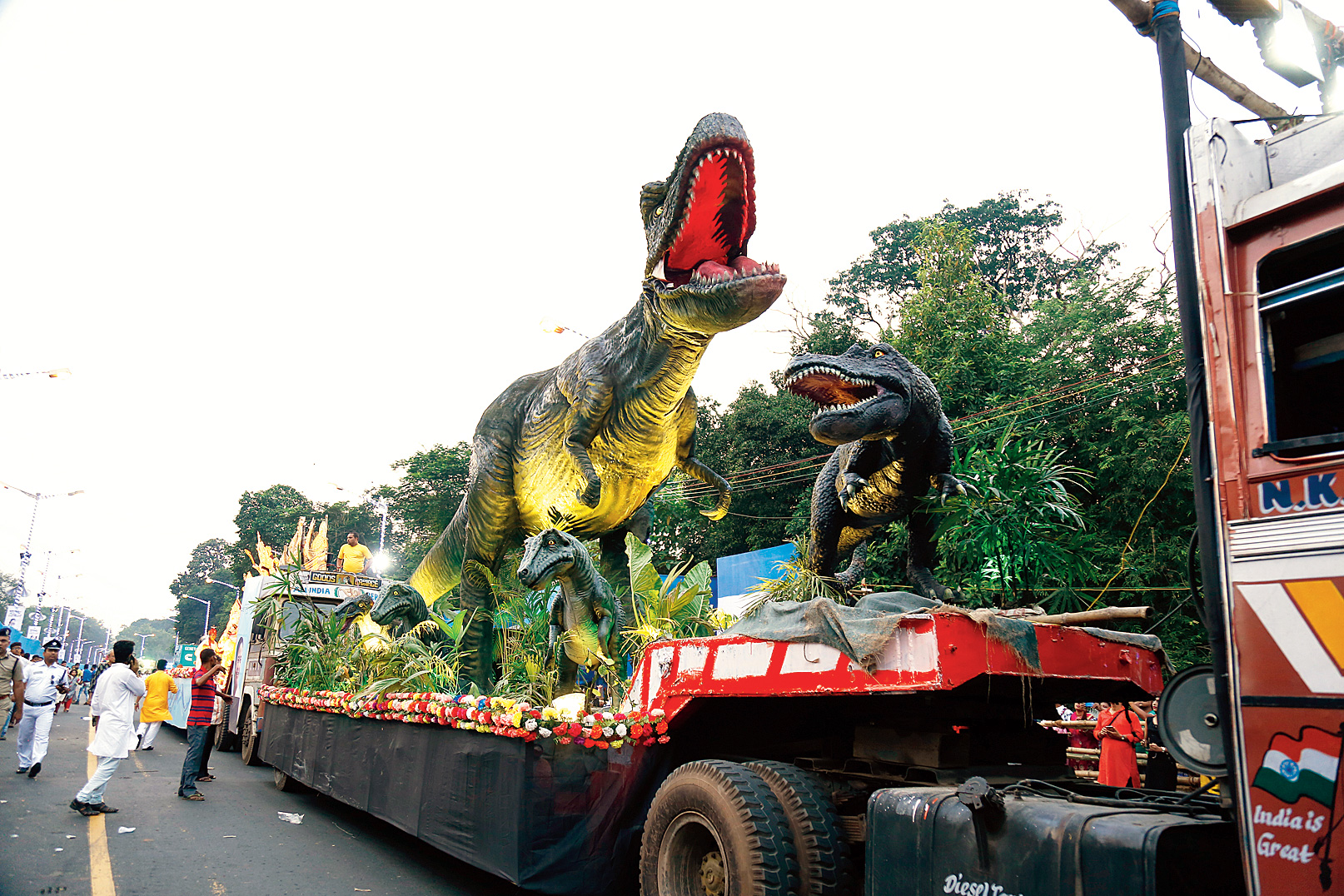 The tableau with the dinosaurs.
Sourav Roy

FD Block Durga puja — in my para — stepped into its 34th year. This year’s pandal was named “Dinosaur Park”, modelled on Steven Spielberg’s unforgettable 1993 classic Jurassic Park. With dinosaurs roaring and in some cases wagging their tails, the entire park resembled the strolling fields of the Cretaceous period. Through the puja days — and nights — and even beyond, our neighbourhood was taken over by wide-eyed children with equally eager parents who queued up to gawk at the animate installations.

The Puja days passed in a radiant haze and before we knew, Dashami was upon us. But the gloom of Durga puja being over was not immediately felt for we had won the Biswa Bangla Sharad Samman for the Best Idol, and this presented us the opportunity to participate in a carnival on Red Road on October 23, on invitation from the state government.

Last year too we had won a similar distinction, having won in the Best Puja category. But this year was special for me as it would be the first time that I would get to march on Red Road.

The preparations started on the evening of Dwadashi, October 21. The idols were taken out for a procession across the block and housed near FD Park. Here they were fitted to trolleys and decorated for the final round of display. One trolley carried the idols and another the dinosaurs. The following night, they set off for Dorina Crossing where they would stay parked till the carnival was flagged off. A journey that would usually take an hour took ages as over-hanging wires had to be removed and low-lying branches of trees had to be chopped to prevent them from damaging the sculptures.

The next day phones were abuzz since morning with calls and messages checking whereabouts and prods to be punctual. Most of us assembled by noon, some were fashionably late, and the puja committee members chose the hour for some urgent meeting, leaving us impatient and our make-ups in danger of melting. After much commotion, around 1.30pm we boarded the bus, our bahon for the evening. It felt like a picnic. The dhaakis and two policemen accompanied us too, making us all feel like VIPs. 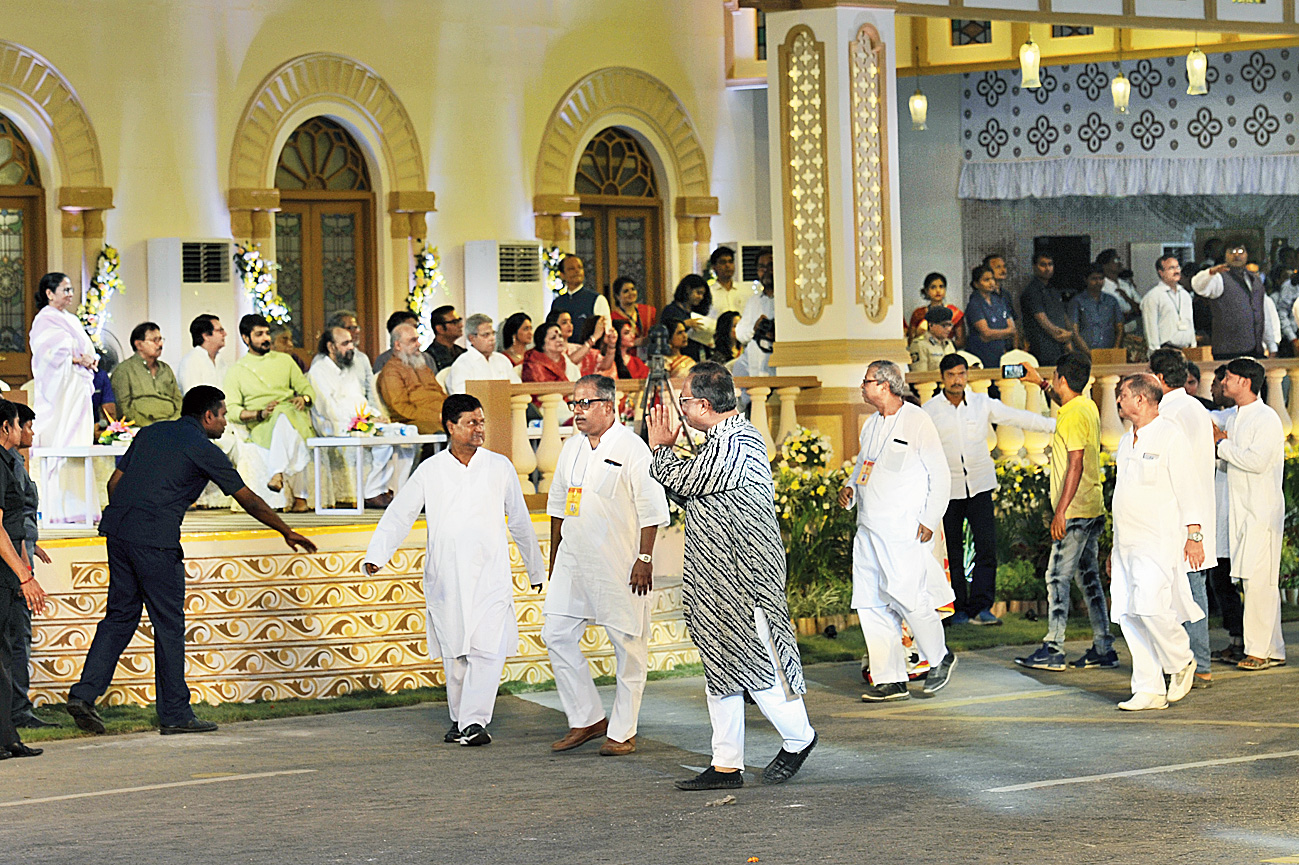