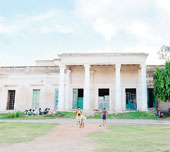 The gargantuan palace of the Goswamis in Serampore — part school, part ceremony house, part employment exchange, mostly in grand decay — has been in the news of late as the runaway hit film, Bhooter Bhobishyot, was shot there. But this former Danish colony — once known as Fredriksnagore in honour of the Danish king, Frederik V, who ruled from 1746 to 1766 — still boasts some landmarks harking back to the 18th century when the Danes held sway from 1755 to 1845.

The most prominent of these is St Olav’s church (1806) whose steeple dominates the town’s skyline when viewed from the Barrackpore ghat on the opposite bank of the Hooghly. The Serampore riverfront is cluttered with new apartments of unvarying ugliness and the steeple is the only reminder of its more eventful past.

But there is more to Serampore’s built heritage than the derelict Lutheran church closed for sometime. For, near it are the old single-storeyed, colonnaded Danish Government House (1771) or Governor’s house within the compound of the Serampore sub-divisional court, the Catholic Church (1776) and further down the strand, the magnificent Serampore College (1823). Here the New Testament was translated and produced as the first printed book in Bengali after the three Baptist missionaries, William Carey, Joshua Marshman and William Ward, turned the college into a publishing powerhouse to spread the good word in the vernacular.

The three missionaries laid down their lives here, and their mausoleums are in the well-maintained mission cemetery, not far from the Danish cemetery. The latter is supposed to be in the care of the Archaeological Survey of India, but the headstones are crumbling and the enclosure is overgrown with grass. Somewhere in between is the Serampore Subsidiary Correctional Home or catcherie (a Danish loan word derived from the familiar Hindi word) dating back to 1803 and still in use. Only traces of the once popular Denmark tavern and hotel remain, but the Bengali merchants like the Goswamis, who made their fortunes during the heyday of Danish rule, have a more formidable presence.

The two Goswami palaces are of 19th century vintage, the larger one a mishmash of architectural styles hemmed in by apartment blocks. Its façade is an odd assemblage of an arch gone askew, columns with no roof to bear, and signboards. Going by these, the building is shared by several schools and the state government’s employment exchange. One of the many entrances leads to a spectacular thakurdalan with a naatmandir, its roof held aloft by towering columns.

There is much else besides scattered all over the town, like the rasmancha by the riverside wearing a canopy of leaves, and the abandoned home of the Bose family with impressive gateways. As in many former colonial towns, the built heritage of Serampore is thus an intricate tapestry of European and indigenous styles of architecture. It was neglected till 2009, when the West Bengal Heritage Commission (WBHC) decided to restore the Danish Governor’s House. A preliminary estimate was made by architects, and, accordingly, funds were requested from the department of information and culture of the state government. Only a part of the restoration could be completed within the time limit, says Partha Ranjan Das, member, WBHC.

Now, Denmark too has evinced interest in reviving the remnants of Danish buildings, and The Serampore Initiative was established in 2008 at the ethnographic department of the National Museum of Denmark. Archival and field studies were carried out from November 2008 to April 2009 by restoration architect Flemming Aalund and historian Simon Rasten, who produced an amazingly elaborate, detailed and perceptive report titled Indo-Danish Heritage Buildings of Serampore.

One wonders why the heritage committee of the Calcutta Municipal Corporation has not been able to produce a similar document on Calcutta’s heritage buildings. Debasis Bose, member of the committee, says, “The cry of the hour is an intensive survey of the buildings of Calcutta. Without such an inventory how can we prioritise what is worth preserving and what is expendable?”

The French government too has woken up to the fact that without its intervention its architectural legacy in its former settlement, Chandernagore, will soon be gone. The WBHC with typical short-sightedness had produced a list of seven buildings — the French Institute, clock tower and Prefecture of Police (jail), Liberty Gate, Church of Sister Cluny (St Joseph convent), Tristle Hostel (sub-divisional court) and French Cemetery Cathedral.

The Embassy of France in India, a Paris-based NGO (Vieilles Maisons Francaise), and the French Heritage in India Society commissioned a listing of buildings of shared cultural heritage value in this French settlement in India, second in importance only to Pondicherry. The inventory was produced by Aishwarya Tipnis Architects between March 2011 and February 2012.

The team has made an inventory of 99 buildings and four heritage precincts of value with unique elements common to Indo-European architecture but different from Pondicherry which has distinct Tamil and French quarters. “Chandernagore is a tangible expression of a mix of cultures, choosing a European expression for its facades and planned around courtyards with a traditional thakurdalan inside. The more Frenchified houses, like Doyal Manzil, which will be ‘developed’ soon, are planned around courtyards, have high walls, patio and a typically European staircase,” says Tipnis.

“Chandernagore’s special character doesn’t lie in monumental buildings but is a unique ensemble of small residential buildings. We have tried to identify typologies of buildings, examples of surviving street furniture and lamps demonstrative of the confluence of cultures,” she adds. They developed a methodology working out common parameters for the whole team to avoid subjective assessment. Apart from the buildings being in various stages of decay, she feels that they are in dire need of service upgrade. The municipal corporation needs to develop guidelines in keeping with the historic character of this town to protect this heritage as well as improve the living conditions of the community.