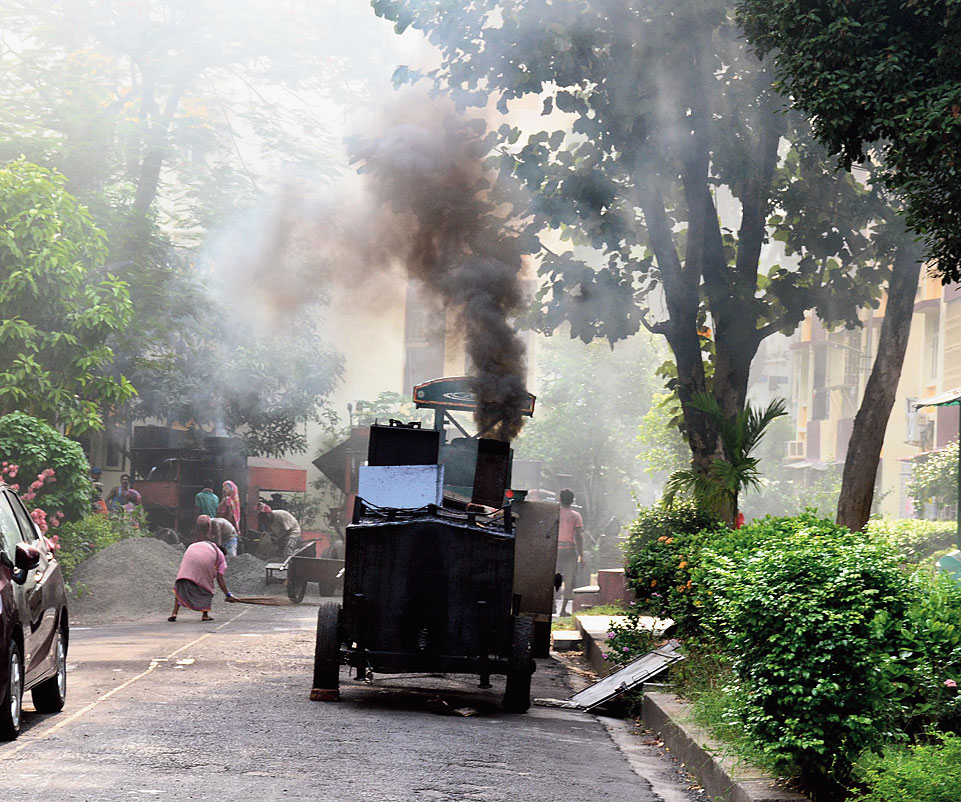 Two smoke-belching machines, fed on coal and wood, were back in action at IA Block to heat up liquid bitumen used to repair the roads inside the block and in the process, choke residents and passers-by.

The Telegraph Salt Lake had reported on June 7 how the smoke-spewing machines were causing breathing problems for a large section of residents in IA Block. The contractor had stopped work on road repairs for a week but both the machines were back in action on Tuesday and Wednesday.

Sudip Sarkar, a resident of IA Block, said that this time one of the machines was set up outside IA Market near Tank 13 to carry out repairs on one flank of the market that leads into the block. “Several residents who live near the market called me up and said they were facing breathing problems. Several shoppers too said they had complained to the men operating the plant but no one paid heed to them,” said Sarkar.

Another resident, Ashok Kar Majumder, said that nearly everyone in the locality had complained of breathlessness but that the supervisor had expressed helplessness.

“We can do little as the bitumen needs to get heated up to be sticky enough to mix the stonechips in it that form the blacktop,” Kar said, quoting the site supervisor.

On Wednesday morning, the workers, having finished the repairs near IA Market, moved the plant in front of Cluster II of Purbachal.

According to a Purbachal resident, who did not wish to be named, they started work and the entire area was covered in thick dense black smoke in no time.

“I had stepped out to shop for some groceries when I saw the hot mix plant spewing smoke right outside our gate. I found it difficult to breathe,” said the resident.

Minu Chakraborty, the councillor of the ward, said that they could do little to ease the residents’ woes.

“I have always seen roads being built like this. I am not aware if there is any new technology as I am not a technical person,” said Chakraborty. 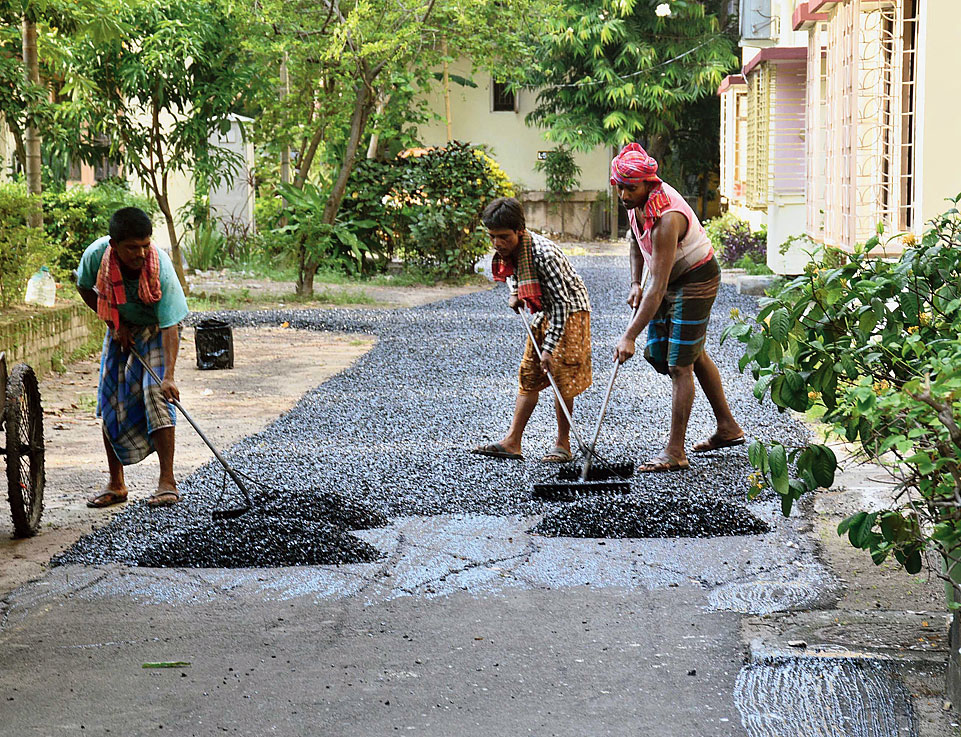 Deputy mayor, Tapas Chatterjee, who is the mayoral council member in charge of roads, said no resident had submitted a complaint to him. “I will look into the matter and take adequate steps. We cannot inconvenience residents,” he said.

The Calcutta Municipal Corporation has identified a plot at Sirakol in South 24-Parganas’ Mograhat for a factory to manufacture the bitumen mixture needed to lay roads.

The move came after the National Green Tribunal asked the civic body in October to shut down its two hot mix plants that produced bitumen.

On December 18, the tribunal had provided a temporary breather by saying the civic body had to stop using hot mix technology for road repairs within four months.

The batch mix plant at Sirakol will use the hot mix technology that releases toxic gases into the air.

But the civic body’s defence is the new plant will be “far away from the city”, something that Delhi did 10 years ago when it was forced to close its hot mix plants within the city.

Hot mix and cold mix are two ways of preparing the bituminous mixture that is used to lay asphalt roads. The bitumen used in the two technologies is different.

In the hot mix technology, bitumen remains in solid state and has to be heated to turn it into a liquid state so that it can be used to lay roads.

Carbon dioxide, the primary cause of global warming, fine particulate matters that can enter the deepest crevices of lungs and even cause cancer, and other toxic fumes are released when bitumen is heated.

In cold mix technology, the bitumen remains in liquid state even in ambient temperature and doesn’t need any heating. That means no toxic fumes are released.

Many environment experts have said the civic bodies should go for cold mix technology that is less polluting.